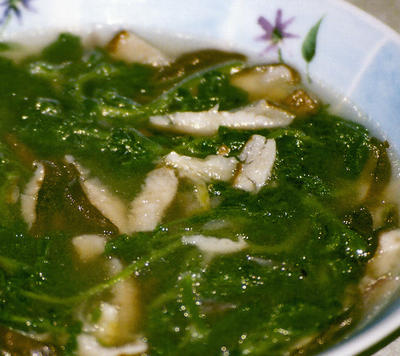 [Forest Stream Soup, adapted from Cafe by the Ruins Menu]

Sam of Becks & Posh is the host for IMBB#19, and is enjoining everyone to cook something vegan and trick somebody into eating it without revealing that what was served was of a purely vegan form (no poultry, meat, and poultry and meat products, including dairy and dairy products). This, in the hope that people will exclaim, "I can't believe I ate vegan!" after learning the composition of the dish.

However, as Karen of The Pilgrim's Pots and Pans more or less mentioned in her 1st Vegan entry, a traditional Filipino household eats something vegan at least once a day. Vegetables always accompany a fish or meat dish and rice. For those in the countryside, stewed, boiled, steamed, or sauteed vegetables, flavored with bagoong (salted, fermented anchovies) or alamang (the shrimp version of bagoong) or patis (fish sauce, the clear, amber liquid that is a by-product of bagoong-making), would be a sufficient companion to steamed rice.

The bagoong flavoring, though, would disqualify a Filipino vegetable dish for this IMBB, and so I made a soup I always order at my favorite restaurant of all time, Cafe By the Ruins of Baguio City. It is called forest stream soup because the ingredients, fresh shiitake mushrooms and fresh watercress, grow in abundance along streams and and other waterways. One of my good friends said the soup is called thus because it recalled the taste of a stream, or even a river. I'm not sure how a stream actually tastes like, but the soup is a bestseller, and I try to cook it everytime fresh shiitake mushrooms are available in Baguio city.

Which is just about now. And the friend is the only exception in turning an averse shoulder to the soup. Other friends and the hubby eagerly await the rainy season so I could cook my own forest stream soup. Somebody even bought me a whole bag of dried shiitake to substitute for the fresh ones when not in season, but the taste is different. The dried shiitake has lost its earthy notes, and has acquired a packed, intense flavor that overpowers the delicate taste of the watercress.

The shiitake and watercress come in a clear broth, but this is not a light soup. The shiitake's texture makes you think you're eating meat, and it feels thus in the stomach. The sesame oil flavoring will make you drink the soup up to the last drop, and makes it truly Asian.

Here's my recipe. The finished product very closely approximates Cafe By the Ruins' Forest Stream Soup.
1. Slice about 1/8 kg fresh shiitake mushrooms thinly. Pick the young leaves of about 1/4 kg fresh watercress. Rinse both.
2. Saute in a little corn oil some crushed garlic, adding sliced onions when the garlic has browned a little.
3. When the onions have turned transparent, add the watercress and stir a little. Add 4 cups of water and turn up the heat.
4. Let boil, then add the sliced shiitake. Add some salt and finely-ground white pepper. Stir and cover.
5. After a minute, turn off the fire. Pour a drop of sesame oil and mix into the soup. Serve hot.

With this, my friends, the hubby and I will gladly eat vegan! Anytime, if only fresh shiitake are available year-round.

And Sam has started with the first of about 3 1/2 round-ups! Yes, the entries were that many!

Kai, this soup sounds wonderful and something I can make here as we get fresh shitakes and watercress all the time. I will be adding this to my daily meals, so thanks so much.

Yeah, I agree that shitake tastes a bit like meat, I managed to fool someone in thinking it was chicken for my vegan meal.

Ayayay! This looks extremely delicious! Truly, if only fresh shiitake are available year-round, vegan would be effortless!

Cafe of the Ruins is such a wonderful name for a restaurant! The soup sounds absolutely delicious.

Cafe of the Ruins, indeed is a great name, and the name Forest Stream soup sounds so romantic too.

But this recipe is more than just a pretty name, on reading it sounds full of flavour and I can't wait to try it. Trouble, is I have so many fabulous sounding entries to IMBB19 sittin in my email box, that I dont know when I am going to find the time to test them all out. One day...

thank you so much for taking part in this challenging IMBB#19 - I hope you had fun with it.

That sounds super tasty! I'll definitely try this out, thanks Ren!