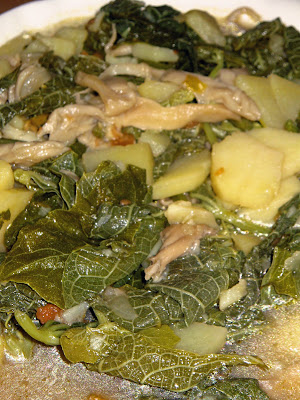 The cheapest, most common, available year-round vegetable from Baguio City and the Cordilleras is the sayote, chayote in English (Sechium edule). Ten pesos can make you richer by about five, heavy pear-shaped fruits, or a really thick bundle of tops or young leaves. This is because sayote is easy to cultivate - it grows everywhere, can be harvested weekly, and needs minimal care. The fruits keep a long time, and lend untold sweetness to any soup or stew.

It is not favored, though, in my family. Probably because unripe papayas are held in such high esteem, while the sayote fruit, like the eggplant and other water-logged fruits, is dismissed as just containing water and not much else. And partly because it is so common and available. The leaves feel so rough to the tongue and are too chewy.

I'm trying to remedy that now that I am grown up and managing my own kitchen. I still haven't gotten over my childhood indifference to the fruit, though I try to have it as often as once a week in a tahong-halaan tinola. But it is the tops that I have quite developed a love affair with.

My sister, influenced by her in-laws, taught me a great dish using the young leaves. The tops, including the tendrils but with the tough bottom stalks removed, are sliced and sauteed with tomatoes, julienned potatoes and oyster mushrooms, and flavored with tiny shrimps. A little water is added for some broth, and for the stalks to soften in a little. 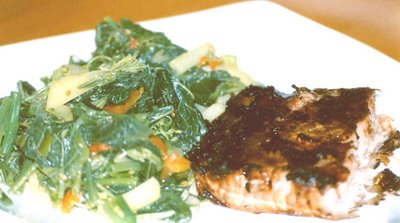 I have come to adore the green leafy taste of the dish, a bit peppery but with sweet hints, punctuated by the light sourness of the tomatoes and the earthiness of the mushrooms. The potatoes provide starchy, soft points to contrast to the leafy bites. Paired with a chop of teriyaki-glazed tuna belly, or any other grilled fatty fish, such as Bonuan bangus or salmon, it provides for a scrumptious and satisfying evening meal. 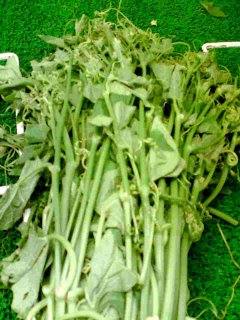 So when in Baguio buying sayote tops is a must for me. Of course after a healthy dose of Good Shepherd products. Dealers of Baguio vegetables in my hometown and in Dagupan City always stock up bundles of it, and I always see some in the vegetable crisper sections of major supermarkets in Metro Manila. However, these are, almost always, wilted or ready to wilt.

This is understandable, since they have undergone hours of traveling and being tossed here and there. They are quite sensitive, actually. Even in Baguio, those harvested in the morning and remain unsold in the afternoons are already droopy. This is true for most leafy vegetables, anyway. They don't travel well, and they really can't be stored, even in the refrigerator. Which brings the necessity of going to the market on the day you want to cook and eat them.

maybe you can make an ensalada with sayote tops too.

Angelo, I don't think sayote tops would lend well to a fresh salad. The leaves are too rough and the stalks too chewy to be eaten raw.

Relly, no, they are a world away from kamote tops. They're more on the sweet, peppery side - probably closer to bok choy in taste, though not in texture.

i love sayote tops, too. i had my first taste about 10 years ago when our cook during a baguio seminar prepared a soupy vegetable medley of sorts (read, halu-halong gulay) dominated by sayote tops. i love its mild, sweet, peppery taste. it may be a little rough to the tongue but its also surprisingly soft with a good bulk to chew on.

wow, kai! ur pics makes my mouth water and pine for sayote tops!