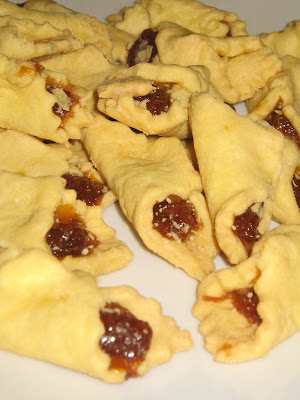 Oh, yes. Have you checked recently? How many days to go?

Though I'm not yet in that frenzied shopping mood, because I still have two family birthdays to go through, and I'm in the middle of preparing for a big one in about three weeks' time. I shop, but leisurely, and with a direction, limited to decor that has to be related to the party motif, party favors, and food for the party.

Which is opposed to Christmas shopping that's grabbing anything within your sight, and thinking later whom to give them to, to the point that those not in the list previously have to be included due to surplus of things bought.

I'm still in control, because the tiangges (flea markets) that are part and parcel of my Christmas shopping are still more than a month away.

But bazaars are starting to sprout in Metro Manila, and the one ongoing right now is the 23rd Negros Trade Fair at the Rockwell Tent. This is the same one I've been visiting for years now, and have become the third bazaar I go to every year (although it is the first one to be held in the year among the three).

I had new discoveries in the food section last year, as well as indulged in my all-time favorite Negrense delicacies. This year, though, there was nothing new - the same exhibitors - so I went there solely for a fix of familiar and favorite Negrense pastries.

And other food, of course. Had the venerated cansi and KBL (kadyos, baboy, langka) for lunch, both liltingly soured with batwan, from the outlet of Inasalan sa Dalan. Then bought packs of panuelitos - pinched little crackers holding hardened mango preserves, looking like cute, folded little hankies (thus the name). Also Quan's crispy, eggy rosquillos, and all the flavors of Clara's special homemade barquillos - strawberry, ube, pandan, coconut, chocolate and the specialty, goat's milk. 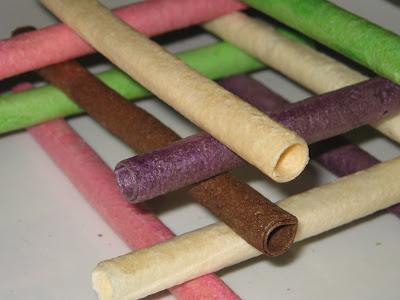 [Clara's Barquillos]
I discovered Clara's barquillos when an officemate went home to Bacolod City and brought as pasalubong Negrense pastries. She brought in particular a jar of Clara's Coconut Barquillos, and I couldn't stop dipping my hand into it - they were so delicious. Since then I have always been on the look-out for Clara's barquillos, and so they are always included in my stash from the yearly trade fair.

The trade fair is worth going back to, especially since there is still two days left for the trade fair, and this weekend there is a scheduled fresh market where organic fresh produce from Negros will be sold. I hope to procure fresh batwan and kadyos, so I can cook cansi again, in all the variations I learned from a friend, and try that lamud that is a traditional farm staple in Negros.

My blog is starting to look like the emphasis is on food from Negros, aside from Pangasinan and Cavite.
Posted by Kai at 4:25 PM

Who cares where the food is coming from, it's making me hungry! And oh, I don't want to know just how close Christmas is! :)

It's just around the corner!