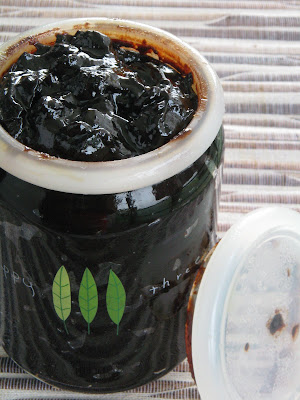 One of the things I vowed to bring home from Iloilo, during my one-day trip there last year, was batwan, the souring ingredient of choice in Bacolod and Iloilo, and I assume for the islands of Negros (at least in the Occidental portion) and Panay, as well.

Batwan can only be found in these islands, and I had relied on generous friends for handfuls of the fruit for me to use in making Ilonggo dishes (cansi, KBL, even the common-across-the-islands sinigang na bangus). Since I'd be in Iloilo on a business trip (read: all expenses paid), it had been my turn to bring batwan as pasalubong.

During my casual jaunt to the Iloilo City public market in the afternoon of my trip, no batwan was to be found. But when the brother of an office colleague, with whom I flew into the city, heard what I was looking for, he made some calls, and by the time we were heading to dinner a sack of very fragrant batwan - reminiscent of ripe lanzones that had a citrusy zing to it, which made me drool - was waiting for me.

This was the same person who introduced me to Wewyn's squid rings, who looked for diwal for our group to dine on, told me to try Roberto's siopao and who drove us around the city letting us taste his favorites - great, newly-fried peanuts on the highway to Pavia, soup no. 5 (my first!) in Mandurriao, an excellent lumpiang ubod, crispy crablets.

He was solely responsible for all my eating adventures on that incredibly food-laden trip. I could not have squeezed everything, nor would have experienced everything, in probably a week, what I ate and tasted and tried and brought back home in just about five hours. Thank you, Manong Bong Young. 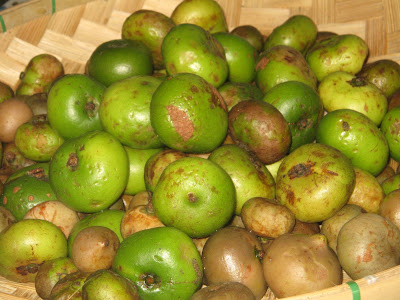 There were about three kilos' worth of batwan in my backpack, and in between all the squid rings and piaya and chocolate rolls and biscocho and barquillos, they were squeezed and squished until I could get home and unload them.

By that time many had turned brown and mushy. The very reason they cannot be found anywhere else outside of the Ilonggo region - they don't keep well, much less travel far. I was told three days from the tree and they lose their prime.

Although I have a large household with all the househelp and nannies and drivers, we all could not keep up with the batwan spoiling, even though all we had was sinigang (soured broth), alternately with fish and meats, for days. A third of the loot went to all my previous benefactors as pasalubong, and we desperately tried to use up another third until our molars ached.

The last third needed to be cooked, fast. I remembered my Ilonggo host mumbling something about dulce de batwan. I had heard about kamias jam, so the idea wasn't far-fetched.

And since I bought muscovado sugar at the Iloilo market (said to be used for kalamay), I decided putting them together would be such a good, truly Ilonggo idea. 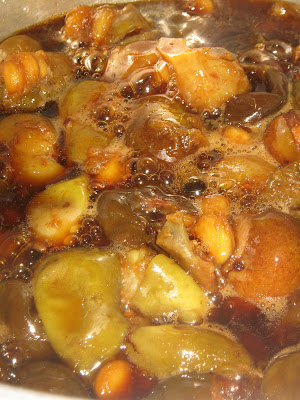 I just washed the batwan, put them whole in a deep pan, and sprinkled all the muscovado (about 1 1/2 kilos). When I stirred the mix I thought it was too dry, so I added about two cups of water. When the mixture was bubbly I turned down the heat so it was just barely simmering.

After about an hour the jam was a superlative amber color, the batwan mushy and had shed skin. But it still had too much liquid, so I decided to lower the heat a little more, and left the pan uncovered.

Another hour and the jam was the consistency of syrup. When I tasted it it was so sour, like unsweetened tamarind. So I added about a kilo more of brown sugar, which was all we had in the house.

On hindsight I should not have chickened out and let the sugar melt, without adding the 2 cups water. The additional brown sugar aggravated the situation, and it took all of five hours of a gentle simmer for it to get to the consistency I wanted. By that time, however, the jam had turned black from the burnt muscovado.

~ ~ ~ ~
It's been four months since I put the jam in bottles and hid them in the cupboard. It had mellowed down, the sourness just a whisper, and it has a woderful chewy, chunky texture, the seeds soft and totally edible. Its taste is akin to candied tamarind, the sweetness in deep, earthy tones, but without the characteristic acidic tartness.

Paired with good butter on toast, it makes for a lovely breakfast, or afternoon nibbles. If only it had retained its beautiful amber coloring, it could make for an excellent gift. Good thing, though, there is not a hint of bitternes from all the burnt sugar. So I guess I should not be bitter about it, too. Especially since it's very enjoyable, cost almost nothing,* and a totally Filipino organic jam, to boot. A rather great way to use up those excess batwan.

*A kilo of batwan cost Php20, the muscovado was about Php60, the brown sugar Php30. Total of Php110, about US$2.50, and I had the equivalent of about three jam bottles, or about Php40 per bottle (the cooking cost me nothing, because my utilities are free, care of the husband's company). What else could possibly beat that?

are you using these on breads? Namit?

Yes, on bread with butter to counter it. But it's better on toast. I served it to a Bacolodnon last weekend and she pronounced it namit, and had to take home a small bottle. ;-)

Hello Kai! I enjoy reading your blogs and looking at the supporting pictures. Keep it up!

Correction.... Batwan can also be found in Cagayan, Batanes and Pattaya.. bought couple of them for my new recipes.

Oh, thanks for that info. Which Cagayan do you mean, CDO or Cagayan Valley?