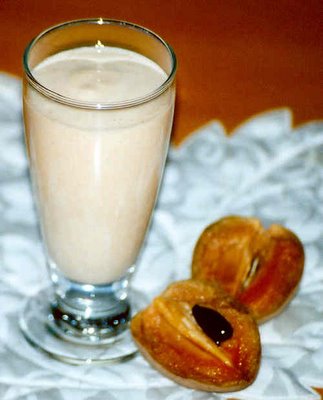 I grew up amongst chico trees in my paternal grandparents' expansive orchard. During chico harvest time, which is around the rainy season extending to the end of the year, truckloads of the mature but still unripe fruits are picked, scrubbed to get rid of the sticky white sap that oozes out of the freshly picked fruit, then sold, ready to ripen.

Of course, my grandparents leave more than a few for the family's consumption, leaving them lying down on the cool kitchen floor to turn sugary sweet in about a week. They are ripe and ready to eat when they are soft enough to halve open by pressing the fruit with your fingers without force, revealing several black seeds. The flesh should be the color of golden chocolate, almost bronze.

But as with all fruits, they are best eaten when ripened on the tree, halving them right under the chico leaves and delving in the sweet, grainy flesh in the shadow of the tree which bore it. In situ. No need to wash, as you scrape the soft flesh with your teeth to the skin, then throwing it down to the soil to fatten it up for the next flowering season.

The chico trees are harvested of fruit before full ripeness, though, to prevent a rainfall of ripe chicos on the orchard floor, and to get to them first before the birds and the bats, which, instead of choosing just one fruit and finishing it off, take bites out of each and every fruit on sight. When ripe enough to eat, they are washed under running water, and we eat the entire fruit, skin on, spitting out the seeds as we go along. 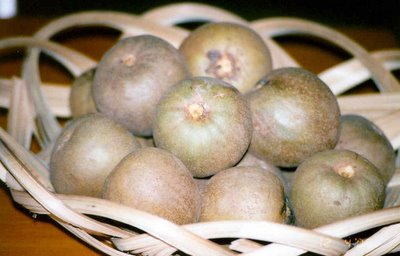 Chicos (Manilkara zapotilla, Sapotaceae) are known elsewhere as Sapodilla, Chico Zapote, Zapote Chico, Zapotillo, Chicle, Sapodilla Plum, Naseberry, Chiku. According to a research, chicos originated in the Central and South Americas, specifically the Yucatan Peninsula, where it is considered a favorite. But being a tropical fruit, it has been propagated and can now be found in almost any tropical area, particularly South-East Asia, India and Florida in the United States.

The abundant white sap, called chicle, is a natural component for chewing gum (now I know where the name Chicklet came from), although synthetic gums are now in widespread use, and in the tropics the chico trees are grown mainly for fruit.

I eat chicos only by themselves, never having come across any dish with chicos in the Philippines. So imagine my surprise, and delight, when Boo of Masak Masak, blogging from Malaysia, wrote about making a chico lassi, inspired by a chico smoothie she drank. I was floored - two new ways to enjoy chico!

I promptly asked her for the recipe, and asked permission to use her photo of the concoction, which she blogged about in this post. Both were very kindly given, and so I have her photo here. Top photo is the one I took of the chico lassi I made following Boo's recipe. 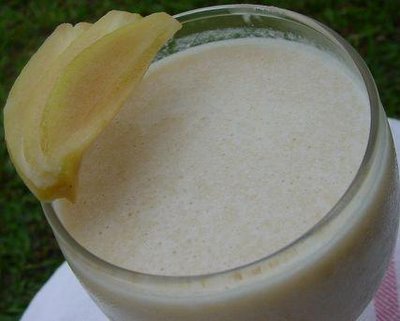 [Photo courtesy of Boo, as published in Masak Masak]

Very refreshing, and a really tropical smoothie. The sourness and creaminess of the yoghurt complements the grainy sweetness of the chico. I've tried a smoothie using evaporated and condensed milk and it was nice, though the evaporated milk somehow overpowered the chico taste. Non-fat milk will probably make it better. 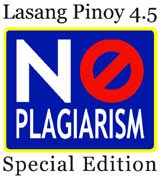 This post is part of the plagiarism awareness campaign, Lasang Pinoy 4.5, No To Plagiarism, launched by the Filipino food blogging community and hosted by Stef at Beyond Adobo to promote proper publishing etiquette on the web.

If you want to use written and photographed materials published on the net, please ask permission from the publisher and attribute proper credit. Claiming them as your own is plagiarism, which carries sanctions, and is tantamount to stealing the properties of others.

For more of Lasang Pinoy, please visit the Lasang Pinoy homepage and events page, whose links can be found in the sidebar.

Email ThisBlogThis!Share to TwitterShare to FacebookShare to Pinterest
Labels: from around the world, lasang pinoy, nainom (inumin/drinks), prutas (fruits)

That's a great idea. I'm also thinking of what other local fruits we can enjoy in a new way.

Oh wow!!! You don't know how much this post awakened indelible childhood memories, Kai. My grandparents also have chico trees in their yard and my father picks the harvest every year. I am the one tasked in helping him *everytime* and it not only involved taking the 'magulang' fruits and soaking them in water but I also did a lot of scrubbing and hulling so I can safely say I was an expert on it. ;) And you're right, tree-ripened chico is the best - so sweet and so much better by leaps from the forced ripened ones. Problem is, usually the birds and bats get then first. Thanks for posting that chico lassi drink now I have another way of enjoying it (if I can find it around here).

The thing is, I don't think I'll ever make any chico lassi since they're gobbled up as soon as ripened. Hmmm...

nice chico lassi... I would love to have one!

BTW, tagged you with "you are what you eat: My 10 favorite foods"

maybe I should just try mango lassi... there is a shop here in Athens that import mango from Phils and those slightly bruised ones she give them to me for free...

Oh my! I've forgoten about this beautiful fruit. I used to love this. My grandma used to have this growing on the side of the house.

chico is one of my favorite fruits.... we only get the canned here and it is nothing like the fresh (no surprise there).... but this almost makes me want to try using the canned stuff... yummy entry, kai, thanks for joining us for LP4.5!