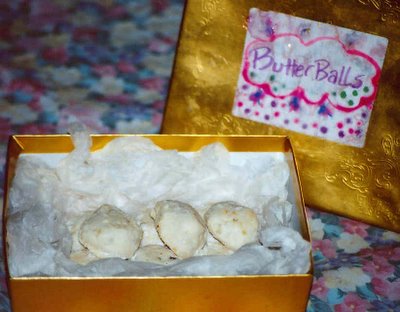 Care packages have an uncanny knack for containing unexpected surprises. Just a few days before the arrival of my package from Napa Valley, California, USA, for the Blogging by Mail 3 swap, hosted by Cathy of My Little Kitchen, my friends and I were reminiscing about childhood sweets - tootsie rolls in particular, since they played a great part in childhood parties, always being included as an exchange gift (besides chocolate-coated pretzels). The reminiscing was bitter-sweet because tootsie rolls are not available locally anymore.

So I was pleasantly taken aback when Celeste, my swap buddy and Asian food researcher/film critic at Chopstick Cinema, as well as a freelance writer and graphic artist, included several pieces of tootsie rolls in the food parcel she sent me. Celeste sent them for my son, and I was glad to initiate him to this childhood chocolate roll. I also had a grand time eating them with him.

Tootsie rolls are a class in themselves - unlike food you miss and remember to be super in the taste department, yet don't taste quite as sweet and flavorful with your adulterated, adult taste buds, the tootsie rolls Celeste sent taste even better than I remember. First made in 1896 in New York City by Austrian immigrant Leo Hirschfield, Tootsie Roll Industries claims the tootsie roll recipe remains the same and rolled in the same wrapper, preserving its looks and chocolatey, chewy taste for more than a hundred years.

But the highlight of the package are the homemade butterballs Celeste baked herself - divine, vanilla-frosted cookie balls with pecans. They came in a golden box with Celeste's creative rendition of a label on the lid, keeping very well on their trans-Pacific travel, and still taste super up to now. I've been keeping them in the refrigerator, apportioning them daily, since even though Celeste sent a boxful, in two tiers, I know they will, as they must, eventually run out. Celeste so kindly included the recipe, and I'm hoping to recreate her specialty by baking a fresh batch of butterballs for the holidays.

Celeste also seemed to know my weakness for specialty teas, as she included bags of Tazo teas - Zen(green tea and herbal infusion), Calm (chamomile blossoms), and Joy (blended black, green and oolong teas) - plus an oolong, Essensia peppermint tea and wild raspberry herbal tea. Half of my tea stash are thankfully caffeine free. To drink these teas in Celeste sent a Napa Valley ceramic mug, as well as leaves from the famous Napa Valley grape vines.

And this exchange being the home for the holidays edition, in the package are print-outs of Celeste's blogs about her kitchen, a review of Ray Bradbury's Dandelion Wine, collecting recipes and family holiday cooking. Also flyers from the grocery stores where Celeste shops, the food section of the Napa Register, and the Christmas edition of NurseTalk, a newsletter which Celeste designs and layouts, and in which she wrote about the best Christmases she has had, including holidays in her childhood home in Mobile, Alabama.

And oh, three pairs of chopsticks, including a pair made from ironwood, a priceless addition to my collection. Celeste is the real collector, though, and she might open a chopstick museum someday. If you happen to own chopsticks with unusual design, please email her a photo, and help build the future chopstick museum. Visit her blog for details, where you'll also read reviews of Asian films and menu preparation based on the film feature of the month. She has, for one, already done a piece about the Filipino film American Adobo.

Those look so yummy!

I loved tootsie rolls too and butter balls! Can i ask for the butter ball recipe? hehehe

Well aren't you sweet! Had I known your nostalgic fondness for Tootsies, I'd have sent the whole dang bag. Those were just a handful left over from my Halloween stash. I did not have a single trick-or-treater! I noshed on a few myself, as I have a Tootsie weakness as well.

And so glad to hear the Butterballs arrived intact. When the fudge brownies arrived in my BBM3 package from aspiring foodblogger Lauren Kraft, neatly packaged in a Ziploc container, I went DUH! Why didn't I think of that instead of a drafty old Godiva Chocolate box. But all's well that ends well I guess...

And just for Ellen, here's the Butterball recipe...

Soften the butter and with a fork, stir in sugar, vanilla, and flour. Stir until mixed well. Add nuts and stir well. Roll into small balls. Bake on ungreased baking sheet at 350 for 15 to 18 minutes. While still warm, gently roll in sifted powdered sugar.

Thanks Karen for the glowing review of my BBM3 package. Blog on...

I have not joined this blogging by mail yet but my post box seems to be receiving goodies from fellow bloggers.

My friend in the US would send me tootsierolls and last nite as we chatted she asked if I wanted more...

They are yummy, Genderist.

Ellen, I was going to ask permission from Celeste to publish her recipe, but she wrote it herself! Enjoy baking!

Thanks again, Celeste, the golden box added to the butterballs' decadence, I assure you.