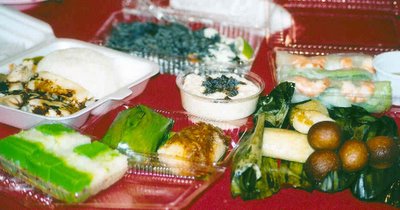 The second of the two tiangges I go to once a year is the annual DFA International Bazaar, held for one day only every 3rd Sunday of November. It is usually held at the World Trade Center along Roxas Boulevard, although last year it was held at the cramped Le Pavilion. It went back to the WTC this year, thankfully, where it is more spacious, so the aisles in between booths were wider, affording one more legroom to maneuver, which is specially important if you are carrying a heavy backpack of goodies plus two huge plastic bags on each hand.

I was initiated into this bazaar by a dear friend who works at the DFA. He just called me one day to say he got me an entrance ticket to a bazaar sponosored by his office. Am I glad he did, for I've been hooked ever since, making it a yearly ritual, nay a pilgrimage, missing it only the year I gave birth to my son, which had been the week before the bazaar. Last year I toured the constricted passageways in between booths at Le Pavilion while I was eight months pregnant, without the hubby's knowledge, but of course with my friend, who always secures my entrance ticket, and while two others waited outside with a car.

My main interest in this one, unlike in the first tiangge that I go to, is mainly food, international food, as may be gleaned from the bazaar's name. The DFA ladies organize this bazaar yearly as a fund-raising event to augment the ladies' foundation's scholarship funds. Most embassies in the country participate, sending their staff to man the booths themselves, and bringing in food and other merchandise from their respective countries to sell in the bazaar. The things one could buy in this bazaar are mostly unavailable locally, despite trade liberalization.

Aside from the regular booths, additional booths are set up at the back of the hall for freshly cooked dishes turned up by embassy staffers, so you could go on with your shopping the whole day without having to go out of the hall scouting for lunch along the breadth and width of Roxas Boulevard.

This is one of the highlights of the bazaar for me. I always make sure I scout these food booths first before I inspect the regular booths so I could plan ahead what to eat for lunch, and what to munch on before and after it. Of course, as with other bazaars, there are free-flowing samples of the food on sale, so buying one for chichiria is generally unnecessary. But I have a bottomless stomach, trained early on by the belt when it comes to finishing the food on my plate, which translated to anything that is available.

I look forward every year to the Vietnamese eatery, always with offerings of rice noodle soup, fresh spring rolls, fried meat rolls and sticky Saigons. This year my friend and I stuffed ourselves so much with the cake samples that we remembered lunch already late in the day, and by that time the phō had ran out. But we were able to secure fresh spring rolls with cold prawn. And paella negra from the Spanish booth, which had ran out of it on us last year.

Last year we loved the beef pulut panggang from Brunei, spicy beef floss inside a roll of sticky rice cooked with coconut cream and wrapped in banana leaves, like a savory suman, so this time around I tried the prawn and spicy anchovies version. Very nice, and hot, though I would have liked to try the beef version again.

We bought chicken hainanese not knowing we had more than enough, so I took it home for dinner, but it was just your ordinary steamed chicken, nothing spectacular. Our dessert consisted of a pandan mousse on sticky rice, again from Brunei, which is the green/white square at the lefthand foreground in the photo, and my beloved gulab jamun from the Indian booth.

I also bought arroz tres leches from the Panama booth, which also sold paella and some pink and white coconut candy balls. We were expecting something fancy with the arroz tres leches (pictured above, center), or rice with three kinds of milk, thinking some kind of special milk was in there, but upon inquiry we were told the rice was mixed with fresh milk, condensed milk and evaporated milk, and I almost couldn't help myself laughing. But it was delicious, and kept so well in the refrigerator. It had some nutmeg, which nicely accentuated the milk and the raisins on top.

One thing we noticed is the prevalence of rice in all the dishes. The fare was mostly Asian, anyway, with a smattering of Spanish and Spanish-influenced cuisines. Which was just as well, for it gave us energy to discover some real great finds, still food related, and kept our hunger in check as we trudged the aisles. It prevented us, too, from being too disappointed with the expensive but over-rated ice cream from Theobroma, which we happily did not have to finish, as we were still sated with our lunch.

Thank you, Edwin. For the lunch and for introducing me to this. Let's have an adventure again next year.

Email ThisBlogThis!Share to TwitterShare to FacebookShare to Pinterest
Labels: ambabangil (samu't sari/eclat), from around the world

You're welcome Karen. And you have to mention the ice cream's brand name, hehe. Now, anybody who reads your article would think twice before buying a Theobroma ice cream, hahaha! Kawawang Theobroma. And sure, let's do this again next year.:-)