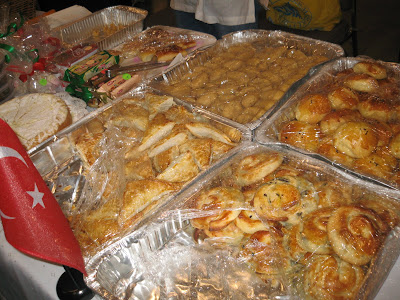 [Turkish Delights: various pastries, helvas, a crunchy apple pie with the nicest crust]
My stomach and my pantry were literally stuffed with food from around the world, from the 41st International Bazaar 2007 sponsored by the Department of Foreign Affairs (DFA) and the International Bazaar Foundation, Inc., in cooperation with the Diplomatic and Consular Corps, held yesterday at the PICC Fora.

Nothing too exotic this year, my favorites were missing, but there were many things new that occupied my day, and sure to occupy my cooking for months to come. Which added to the list of so many things to look forward to next year. 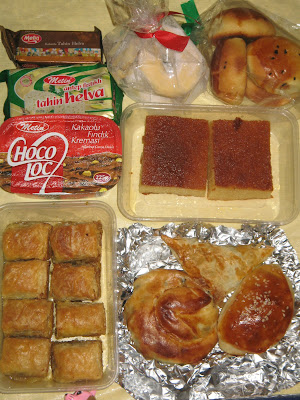 My stash from the spread of Turkish delicacies. Clockwise from top right, bags of crescent moon-shaped shortbread cookies and cheese buns, two slices of Turkish lemon yoghurt cake that somehow more than made up for the no-show of gulab jamun at the Indian Embassy booth.

In foil are a meat pie, a delicious pastry stuffed with feta and herbs, and an olive croissant. In the plastic container are baklava slices, and then a box of cocoa-hazelnut cream.

Last, top left, are packets of helva, a very old Turkish sweet served during special occasions and holy days. I was once presented with a big jar of helva by a friend who spent a few days in Turkey several years ago, and that was my first and last taste of the delicacy. What I got now are called tahin helva, made with sesame seeds, one stunned with pistachios and the other chocolate-flavored. 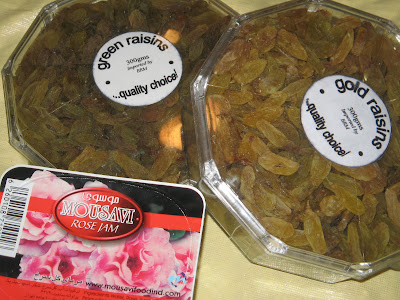 My Persian treasures - green raisins, which I buy annually and which I used in the arroz tres leches that was inspired by a Panamian dessert from the same bazaar a couple of years back (there was a similar dessert at the Turkish table this year).

New this year are gold raisins and a tub of rose jam. Searching for something to mix/cook them into. 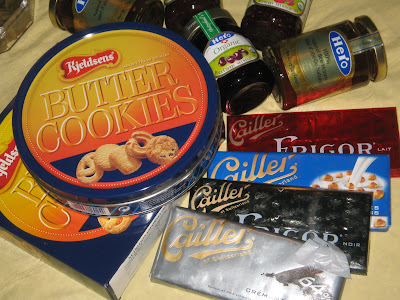 Kjeldsen's butter cookies from Denmark (also available at the duty-free shop), my absolute favorite next to the Royal Dansk brand, an old brand itself and known all over the world. 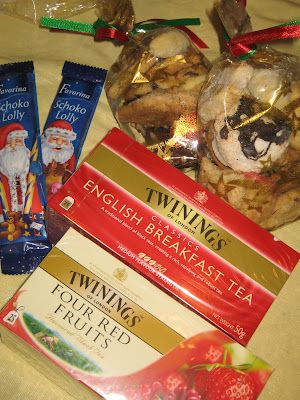 Chocolate Santa lollipops and homebaked Christmas shortbread cookies for the kids, from Germany. English teas for me. My tea cabinet is sadly empty this year. These are the only new teas I was able to source. The South African booth closed early, so I wasn't able to get hold of my whole year's supply of rooibos. No Ceylon and Indian teas, either. I must have bypassed the booths. There was an unprecendented number of stalls selling bead- and glass-works this year, and I must have been sidetracked by them, having been dazzled by the brilliance of the masterpieces. Sigh. 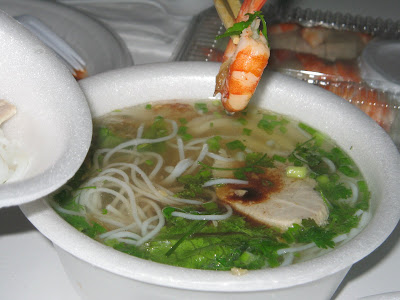 Late lunch, a comforting bowl of Vietnamese shrimp pho soup. I always anticipate having a hot bowl of pho soup every year, and every year the Vietnamese embassy run out of pho before I get to their booth.

This year there wasn't any, but a Vietnamese restaurant operating in Las Pinas (sorry I forgot to take down the name) spread a table, and I swear, their pho is the best in town. Way better than that of the Vietnamese restaurant chain that I featured in a magazine. Their fresh spring roll with large, plump shrimps and a thin slice of beef was super, too. Incomparable, actually. 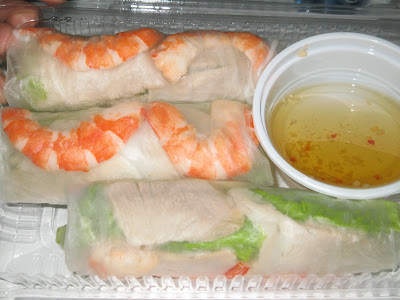 The good food is to the restaurant's credit, because if food were judged by appalling service I believe nobody would have bought from the stall. As it was, people lined at a minimum 30 minutes for something Vietnamese despite the horrendous attitude of the lady manning the food. 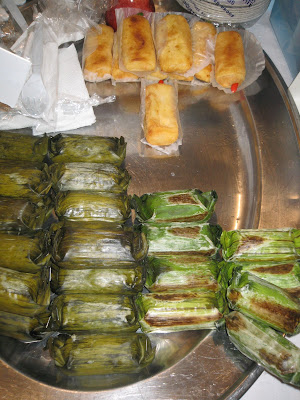 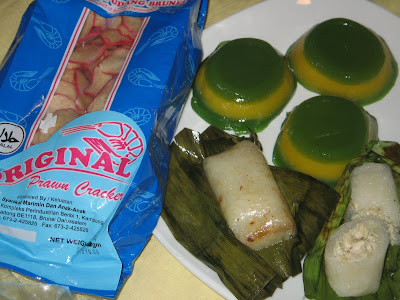