BBM2: Package From The Big Apple 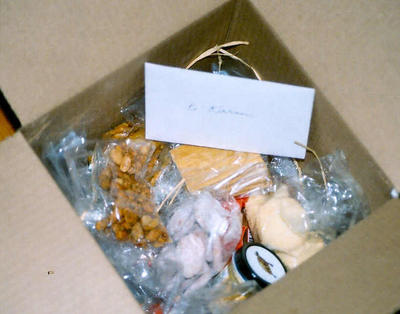 Last Thursday I received a small pink card directing me to proceed to the customs office of the Philippine Postal Corporation. I wasted no time, and upon arriving there I was handed this box containing goodies from no less than New York, that melting pot of a diverse array of cultures, and of course, of all things edible.

The package was sent from Binghamton, assembled by Dev, a professor at Cornell University in Ithaca, who is also doing her doctoral studies on comparative politics and international relations. Wow.

Dev was my swap buddy in the international food swapping activity Blogging By Mail 2, this round hosted by Samantha, first conceived and hosted by Nic of Bakingsheet. 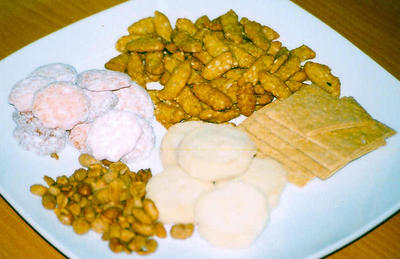 Here are the contents. Photo shows the different kinds of munchies contained in small plastic bags. Dev enclosed a card saying the items were either food that she loved or she chose them because they looked fun and interesting. As enumerated, I will try to identify each. Clockwise, from top: garlic sesame sticks, olive oil crackers, a delicious shortbread that was not in the list, praline soy nuts, and sugar and strawberry buttons.

When I laid everything on the table for a photo session, my son couldn't keep his hands off the goodies. Same with his dad, and they would have consumed all of the strawberry cookies had I not noticed and digged in myself. They were delicious, with a faint hint of tanginess, and looked attractive, too, that's why my son singled them out. Needless to say, we are all strawberry and all-things-made-with-strawberry fiends, so this one was a serious hit.

I loved the shortbread, and I stashed them away for a little treat for myself. The following morning I woke early, and finding everybody still asleep, I took the shortbread from their hiding place and proceeded to eat them leisurely with the Bellagio Caramel Praline flavored gourmet hot cocoa that Dev sent, "because it's getting cold here in the US." Great combination.

The soy praline nuts are Dev's favorite snack item, and they became mine, too. They were reminiscent of our own peanut brittle, minus the unwieldy caramelised sugar. Garlic and sesame seeds are mainstays of savory foods I prefer to eat and cook, so I was delighted to find both of them in one snack. Dev wrote that the olive oil crackers are good with cheese, but being a little salty, I opted to eat them on their own to savor my first taste of them. They turned sweet while I chewed on, and I remembered a gradeschool textbook saying a cracker will become sweet when chewed because the carbohydrate will turn into sugar. They paired nicely with the African Bush tea, of which Dev also sent several teabags. 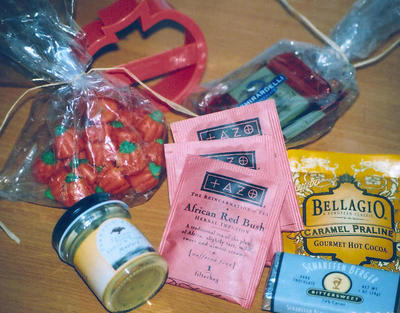 The Tazo African Red Bush tea, from South Africa, was a wonder, a blend of African rooibos (red bush), hibiscus, lemon myrtle, lemon verbena, orange peel, rosemary, lemon balm. If I were shopping for tea and I saw all these listed as ingredients I would have bought boxfuls myself. Although I didn't need to look at the ingredients in this case because the name of the tea was enough to catch my attention. Tazo claims Lucy, our primate ancestor who lived millions of years ago in Africa, would have sipped an African Red Bush tea.

So I felt transported to the beginnings of time as I sipped the tea. The prevalence of lemon ingredients made it tangy, making it unnecessary for a squeeze of lemon. Dev suggested mixing some honey in it. The spicy aftertaste was wonderful, and I liked inhaling the aroma. And I feel robust from its anti-oxidant powers.

Inserted in the corners of the package are the rest of the loot: a bottle of cracked pepper and thyme mustard, which I still have to taste and find a way to use, a bar of bittersweet Scharfenberger chocolate and a bag of Ghiradelli caramel almond chocolate bars from San Francisco, a pumpkin cookie cutter ("for fun"), mallow candies which are Dev's favorite Halloween candies, and a bag of colorful chocolate sunflower seeds, which Dev included because they looked so pretty. They are not in the photo because my son had already comandeered them to be his own.

The parcel arrived in time for my son's birthday. Dev, you made one three-year old very happy with the treats. And a mother very appreciative of how you shared your favorites. I was in New York City for about a week many years back, and there was no way I could have found and tasted the treats you sent. Thank you.

Here's the link to the round-up of the entire swap at Samantha's.

oooh, what fun! but gosh, the world is sooo small. i live an hour away from dev!

It all looks wonderful Karen.

yup! they really look so yum-ee!!do you think i can find them here in Queens? haha..