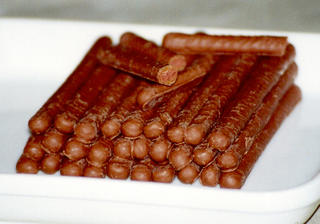 [Chocolate-coated chocolate pretzels]
When I started this blog not too long ago, one of the things I wanted to write about was the food I had while growing up in Malasiqui, Pangasinan, particulary those things that have sadly discontinued their existence, in this country, at least. For I believe that the food preferences in our adulthood are somehow shaped by how we ate, or more accurately, what was fed us, in our childhood.

Writing about it documents what was before, the heretofore existent, and partly satisfies the yearning for what is long gone and unreachable. I'm much obliged to Joey of 80 Breakfasts for providing me this opportunity to relive and record my childhood comfort foods.

Suguz, colorful, chewy candies in various fruit flavors. These were brought home by my Uncle Bett every time he took a break from his work as a corporate lawyer in Quezon City. My Auntie Fe regularly sent Cadbury's from Sydney, and my first taste of white chocolate was heavenly, and has become a cherished memory for the novelty, but it is Suguz I prominently remember. Probably because it cannot be found in the country anymore, while Cadbury's is literally flooding the market nowadays. I thought Suguz was locally manufactured because there was a dearth of anything imported in those days, but some people noted in a food forum that Sugus, ending with an s, or Sugas, is available in Portugal and Switzerland. So it was imported, maybe the reason why my Uncle Bett brought home those candies.

Jack & Jill Pretzels, originally in vanilla and strawberry flavors, but the real, oft-imitated hit was the chocolate-coated chocolate pretzels. Introduced in the hippie decade of the 70s I was born into, it was the staple public school Christmas exchange gift, and birthday gift, and graduation gift....! The pretzels were crunchy, even the chocolate version, while the ordinary, unflavored kind had a hint of salt.

Egg-Topped Cookies. These were small, sweet, buttery cookies, with a yellow, slightly burnt top, said to be an egg, which was the selling point of the elders for me to eat them (anything and everything was an egg then - squash was a cow's egg, carrots were rabbit's eggs, etc. I must have been an egg-lover. Well, I still am, I drool uncontrollably when I recall the smell of freshly scrambled eggs. But all I do now is recall - oh the hazards of cholesterol! They decapitate our full enjoyment of life!). My lolo brought home the cookies, in brown paper bags with shiny grease blots in them, from his weekly trips to Dagupan City.

Coconut juice with milk. This is a refreshing drink of coconut water fortified with milk and binalikatkat ya nyog (strips of young coconut meat), sweetened with sugar and served cold. Standard merienda fare at my paternal grandparents' house, where coconuts were always aplenty. I always make this now when I get hold of some buco from the highways of the resort town of San Fabian.

I have so many food memories in my grandparents' house. In the dark, communal dining room, I remember my palms covered with white goo from rolling ground sticky rice into long, thin rolls, then cutting these into small pieces to shape them into balls, to be added to the kiniler, or ginataang halo-halo (diced plantains and rootcrops cooked in coconut cream). But when I ate the anise-fragrant, filling snack I avoided the bilo-bilo, favoring the seba (saba) and camote (sweet potato).

On Sunday evenings we always had tinolang manok na native (free-range chicken in broth), with raw papaya, potatoes, and malunggay leaves, and the chicken's unborn, purely-yellow eggs never failed to land on my plate. The chicken was a bit gamy - pressure cookers were not a fad yet. Native chickens were cooked for hours in banga (earthen pot) on a dalikan (clay stove which held firewood). The better to bring out the flavor that native chicken has more of than the mass-bred white leghorn, which makes it particularly ideal for tinola.

I also had stints removing orange kernels from dried corn cobs, which were always sore-thumb events. But the corn kernels were for the chickens. We ate the soft, sweet, yellow corn variety cooked in emptied oil cans over an open fire.

And the maloko (cashew nuts)! Covered with live coals until they exploded, signaling that they were ready to be pounded by a stone to get to the broiled nut. And the lomboy (duhat), sprinkled with salt and shaken in a covered container until they were mushy and oozing with violet juice. We could not cope with the huge duhat tree's production when in season, and it littered the driveway with fruit previously pecked by birds and bats. It has since been torn down to make way for the cementing of the perimeter fence.

Thanks again, Joey, for this indulgence, and for the pleasant journey to the past, a virtual trip down memory lane through the tastebuds.

Now it's my turn to read about others' memories. I'm very much interested in the childhood food memories of the following food bloggers - dear Barbara of winosandfoodies.com, who I hope hasn't done this yet, I've checked, but I can't be too sure. Also a relatively new food blogger, Zabeena, whom I know as Lakritz, of A Lot On My Plate. She's on holiday, I'm hoping she could do this when she comes back in time for our Life of Pi book review and menu presentation. And Ting of World Class Cuiscene, who is my kabaleyan by affinity.

Below is the meme tree. When it’s your turn, move down the list, drop number one from the top spot, move the numbers down, and place yourself in the number five spot. Don’t forget to link the blogs (except yours).

I'm sure you'll all have a happy time!

Jack & Jill Pretzels!!! Oh boy, do I remember those...they have such an incredible cult following it's unbelievable!

Duhat! Yes, so good and stains everything in sight :-)

I really enjoyed reading your childhood food memories :-) They were so colorful! I wish I could have experienced eating something cooked in a clay pot over coals...sounds lovely!

Oh, I still remember the TV advertisement with the ending line "Sugus, so good!"

Wait, am not sure if it's spelt Suguz or Sugus. Hmmm... but whatever the spelling is, those were the candies of our childhood. Martial babies unite! Hehehe!

What lovely memories, and such interesting, exotic foods (to me at least!).
Thanks for tagging me, I shall get down to it asap... though I don't quite know how to find 3 bloggers who haven't been tagged yet... (or aren't currently being tagged...

Add to these the tootsie rolls that are gooey and chewy and the red gum candies you buy for 2 for 5 cents I think. The candies are often used to color the lips of young girls who are much too eager to become grown ups! :-P

i should really stop reading your blog before dinner.

anyway,it's great to see that your memories weren't jogged by overindulging :)

i have to hand it to you, this account proves that the best things in life are those you never took in moderation.

hello, kai, napasyal ulit sa blog mo. i'm so glad i did! we have J&J pretzels right now in the cupboard, rationed to the kids every now and then. and duhat, man! this is the one thing i miss the most, because it is not available here, not even canned. pinaglihi ako sa duhat! the closest thing i have here are blueberries and cherries -- i'm planning one day to try and hybrid the two and see if i can come up with something even remotely similar to duhat:(