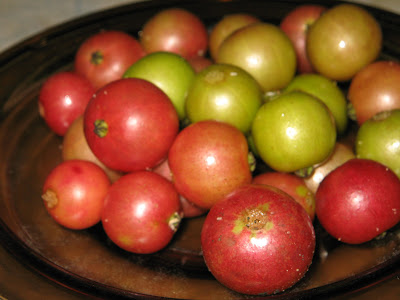 I arrived home one evening horrified at my four-year old daughter’s tale of her and her new-found friends' foraging among the branches of a fallen tree, right along our street, and eating the multi-colored berries that they found.

My daughter was wide-eyed as she described the berries – small, probably the smallest she has eaten, sweet, in vivid hues of red, pink, yellow, green, even violet. But she couldn't pronounce the name, and all she could ever come up with was "teresa."

The dread that I felt grew by bounds, especially since I couldn’t go out to investigate – it was already dark, and there were no streetlights in that area. And I think my knees had been too weak for me to manage walking to the tree. So that the siren that was slowly growing louder in my head had become deafening by first light, when I let the child lead me to the tree.

But my relief knew no bounds when I saw the familiar aratiles berries. One of my daughter's new friends had already beaten us to it, the upturned hem of her shirt already laden with fruit and was ready to depart for home.

It had been a lifetime ago since I last saw, and ate, aratiles.

So more than the relief, I felt suddenly transported back to my boisterous childhood days, when my friends and I had looked up tall aratiles trees in front of other people’s frontyards. They had been laden with ripe fruit, but had been too high for us to harvest. Climbing up had not been an option because the trunks were too thin for climbing, and the branches could not hold up even a small monkey.

We always had to employ a kuya who was willing to harvest the berries - with a netted pole, usually borrowed from the tree’s owner – and share the loot with us.

The trees were usually so productive, the berries so sweet, that soon enough our aratiles lusts were satiated, the pavement littered with thick berry skins.

Coming out of my reverie I caught sight of my child roaming under the branches close to the ground, calling out to me to show me which berries were ripe. And when she proceeded to teach me how to eat them by putting the berry whole into her mouth (unwashed, with me in silent protest) and spitting out the thick skin a few seconds later, I was teary-eyed, with pride and in remembrance of my youth.

And I realized that those moments were the reasons I had agreed to move from the concrete jungle that is Makati into the provincial environment of Cavite. For my children to reclaim the childhood that is rightfuly theirs. To be in touch with nature - to walk barefoot on the ground, to pull up stalks of grass, to dig the soil and build mounds of whatever occupies their imagination, to climb trees.

And more importantly, to learn how to live off the land, and not eat things solely from air-conditioned grocery stores.

So now my daughter, the more food-conscious between my two preschoolers, can identify which trees bear edible fruits, and knows when the sampaloc and camachile seasons are. And of course, aratiles. 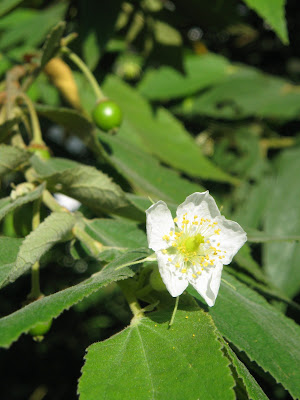 a bloom and a young fruit 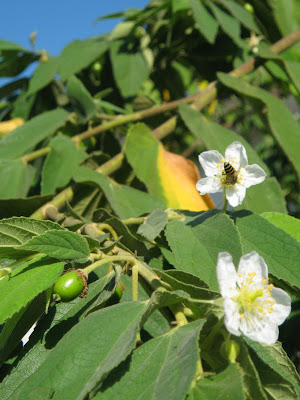 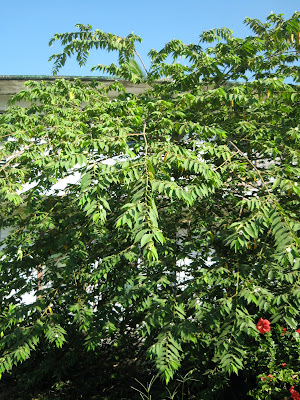 When I was teenager one of the jokes borne out of our reckless youth was this - when you are angry at the househelp, you ask her to do two things - one, to make leche flan out of the yolks of quail eggs, and two, to make juice from aratiles. Of course we never did ask those, but they had been a great source of laughter then.
Posted by Kai at 10:43 PM

I love your writing style. It brings a smile to my face.