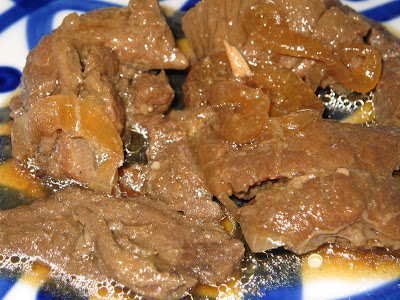 carabao "beef steak," Filipino style
Today is the feast day of San Isidro de Labrador (St. Isidore the Labourer), the patron saint of farmers. Numerous cities and municipalities around the Philippines venerate San Isidro as their parish patron, owing to the country’s being mainly agricultural.

May being the month of fiestas in the country can probably be attributed to San Isidro’s feast day. The more popularly known fiestas are the Carabao Festival in Pulilan, Bulacan, and the Pahiyas in Lukban, Quezon.

Carabaos – dweg in my mother language, muang, damulag, in other languages I am familiar with, and kalabaw in Tagalog, with scientific name Bubalus bubalis carabanesis – figure largely in both these fiestas, owing to the significant part the hardy animal plays in farming. Its being a national symbol, as the country's "national animal," is proof of the importance given to carabaos.

A big part of the day is allotted to the animals in these fiestas, where they parade around town. The Pulilan fiesta is known for carabaos kneeling before the statue of San Isidro, and it's rather unfortunate that one run amok at this year's celebration, hurting several people watching the proceedings.

In Pangasinan, even though we don't celebrate carabao fiestas, the farm animals are a permanent fixture of the landscape. I have fond memories of riding in a wheel-less cart drawn by carabaos during summer, when the lumbering, patient beasts are also on vacation from work. The smell of carabao dung and wet mud, along with tiny flies buzzing overhead, are unforgettable characteristics of those rides.

In Cavite I see no farms, at least in the part where I now reside. But the presence of the animal is still unescapable. More than half of the public market stalls offer cuts and parts of the entire carabao, ready to be cooked into many different dishes. 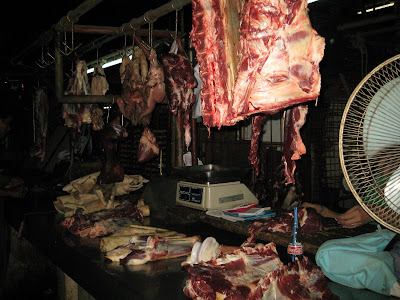 various parts of a carabao at a market stall 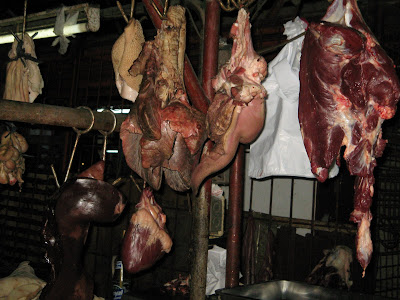 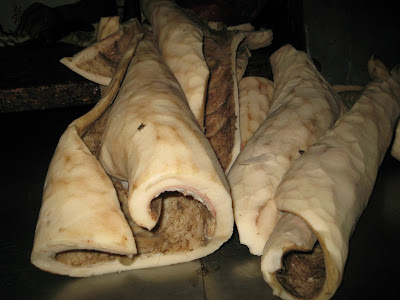 carabao skin
Beef, from cattle, is rare, and costs about a third more. Carabao meat is priced about Php180 a kilo, the internal organs and bones at a lesser cost.

Carabao's milk is also available daily, fresh and unpasteurised, in recycled bottles previously used for gin and who knows what else. I only ever get a bottle by the time I get to the market, and most of the time none at all.

So I usually settle for fresh cheese, kasilyo, made from carabao's milk, a favorite breakfast filling for pandesal, but which is sold until well into the afternoon. I also use it as topping in baking tahong (mussels), also a prominent component of the Cavite foodscape.

It's been bugging me where all the carabaos come from. I don't know any carabao-raising farm or ranch, and I'm sure they don't slaughter farm animals for food. I asked one vendor once, and I was told vaguely that a prominent meat brand raise the animals. 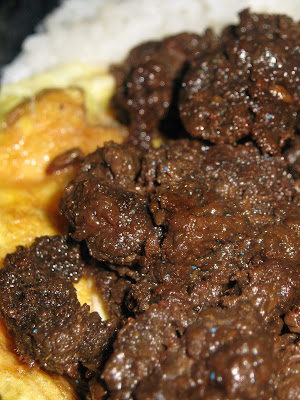 But the Mangaldan public market, in the northeastern part of Pangasinan, is known for pindang. Pre-packaged, marinated carabao meat is available, either to be sun-dried or cooked with the marinade. Fresh carabao meat is also available, for those who prefer to marinate the meat themselves. 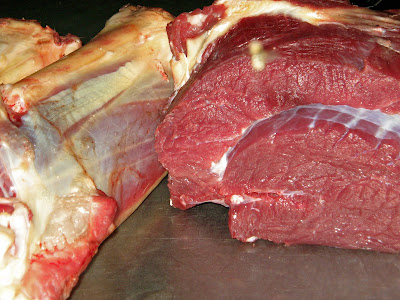 grain of carabao meat
So how does carabao meat differ from the real beef? It is evident in the color. "Carabeef" is redder, and the grain is not as fibrous. Tastewise they are almost the same, except that the beefy taste in cattle meat is more pronounced, while carabao meat is more "magata." Not juicier, but with a creamier flavor. Carabao meat is also not as fat-riddled as cow's meat, so the sauce doesn't "curdle" at room temperature.

I eat carabao meat when I was still back home.

Hi. My Dad is suffering from a disease. The doctor advised us to let him eat a Carabao's liver at least twice a day. I found your blog while searching in google, can you please help us where could we possibly found a Carabao's liver inside Cavite's public market? Thanks.

Hi Anne, there is only one stall in the Cavite City public market that sells all parts of the carabao carcass. Most stalls sell both carabao meat and pork and maybe chicken, but this stall sells just carabao parts. It is manned by a lady, near the stalls that sell eggs. It is about a row behind the stalls selling fish. Go there before 9AM. They sell everyday.

Thank you very much, Kai.

i used to eat carabao beef than any other kind, because its full of taste and nutrition

do they have tender loins?? beef or carabeef?? and how much does it cost?

Hi Bhabylyn, yes beef and carabeef tenderloin are available, though fresh meat is not delivered every day. Some days only frozen beef can be bought. Carabeef sells for P250-300 per kilo, beef from cattle P350, tenderloin sells usually P20 more expensive.

Hi are there any other physical differences between carabeef and beef? or any references. I hope you reply, for our project in school, thank you,

Carabao meat is redder than beef, no fat marbling, and the flesh is more homogeneous

Hi, aside from the color of the meat& its flesh what other distinguishing look you can add...like the fats color...with whiter fats cowbeef or with yellow to yellow orange fats carabeef ....I'm confused...often disappointed because I've been cheated.

How much a carabeef cost now in pangasinan public market?