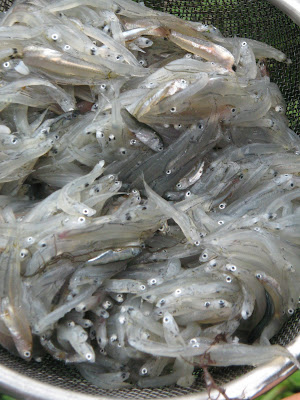 It intermittently rains in Cavite now, what with LPAs one after another, usually embedded in ITCZ, sometimes bonding together to form a super typhoon.

When it rains the whole day, no fish can be found at the Cavite wet market. Fishermen cannot go out in the inclement weather, and fish dive deep to avoid the commotion at the sea surface. Whatever fish is being sold at the market after the rains would be leftovers from the day before, or usually freshwater fish like tilapia and bangus from Batangas.

So I've learned to schedule market days around rainy days. When the rains do let up I troop to the market with big bags and buy tons of fish. For at this time of the year the variety is astounding.

I have a grand time choosing, and a grander time sampling those I haven't tried. Though I think I have encountered a lot of them in Pangasinan previously, I don't think I had them frequently as a child. And I have difficulty remembering how they were called back in my childhood.

Dulong is not really plentiful these days, but when they appear they are so fresh that they're so slimy and transparent. We usually have dulong mixed in an egg-flour batter and fried into torta (fish cakes), but dulong this fresh is particularly awesome in dulong pate - boiled briefly in vinegar with minced garlic and ginger - that is spread on soda crackers. 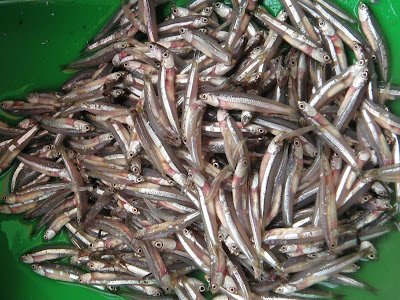 Dilis (anchovies) are many times larger than dulong but are still miniscule by marine fish standards. These fish abound all over the archipelago, and are mostly turned into daing (salted, sun-dried fish).

In Pangasinan dilis is turned into bagoong - a treasured cooking ingredient and immortal eating accompaniment - so that we rarely had them fresh. But while dilis is transported straight from the sea to the bagoongan plants in Pangasinan, in Cavite I've learned to like them fresh. I usually dredge them in flour and fry each individually, which provide a crunchy mouthful for breakfast with hot rice and sliced tomatoes.

While haggling for dilis the other day, an elderly tita conspiratorially whispered to me as I stood nearby that she loved lugadang dilis, an original Caviteno dish. Of course I asked how it is cooked, and several fish vendors contributed their versions. Perhaps I'll cook some for my next post. 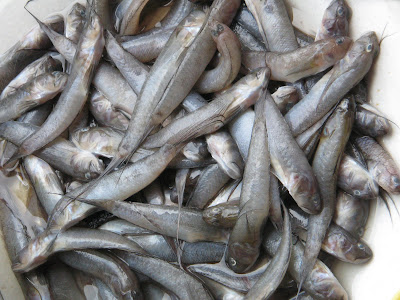 This fish I remember eating, with relish, in Pangasinan. It is called talimusak in Cavite, but I can't remember the term in my mother language (bonor, please see comments below). But I do know that this is so tasty and is great fried to a crunch, while the smaller variety is cooked in a bit of kalamansi juice til soft in Pangasinan. 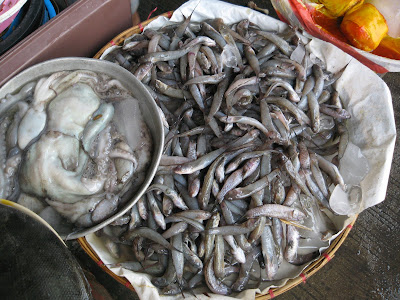 Talimusak is slightly bigger, and stouter than dilis. They are usually greyish with dark or brownish thin stripes, and look a lot like flying fish, without the "wings." 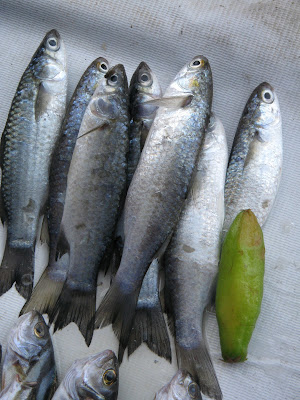 These fish I may have encountered during my childhood, called bolasi in Pangasinan, but I have no memory of eating them. They look like they are good for paksiw (stewed in vinegar), but in Cavite they are called abukos or asobe. Vendors slice off the fleshy parts to be sold as (very small) fillets. 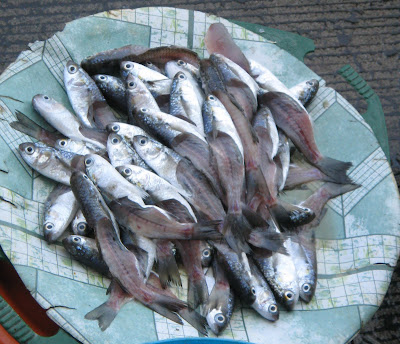 the remnants, for pets 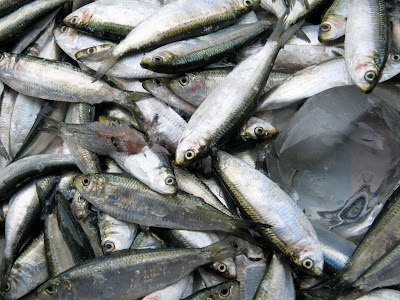 These are called lawlaw, and they look a lot like the fish that's made into tuyo (heavily salted dried fish) in Pangasinan. They're not scaly, though, but are also filleted.

I like lawlaw fillets better than asobe. They are very tasty dredged in seasoned flour and fried, and provide variety for our breakfast fare, especially if dipped in spiced vinegar. 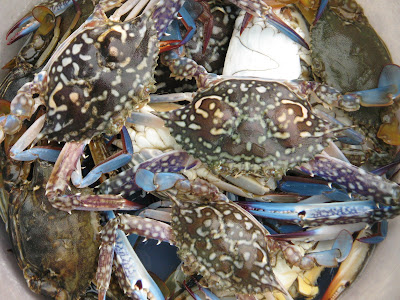 My family had a snobbish streak when it came to crustaceans - they overlooked the supposedly inferior alimasag due to loyalty to the tougher-shelled, solid-fat-laden alama (alimango). Both kinds abound in Pangasinan, but in Cavite alimango are rare. 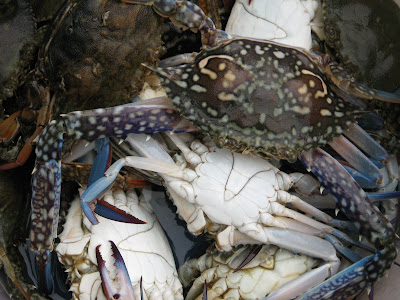 But blue crabs, the white-curlicued, soft-shelled alimasag, are plentiful and cheap. And I've discovered my family's snobbery had been without basis. For blue crabs have such succulent, sweet flesh, and even though a lot of those caught are males I don't mind because they are so fleshy I don't miss the females' yellow fat. 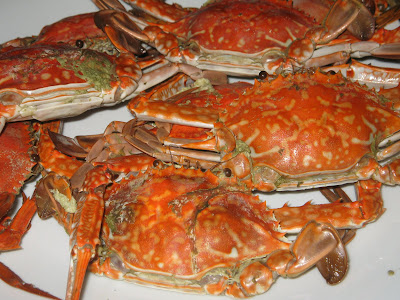 In Cavite blue crabs are stewed in coconut milk with sliced young jackfruit. In Pangasinan we prefer crabs lightly steamed, perhaps toasting them in a little oil and salt afterwards. Or sometimes we like to have them in sinigang. 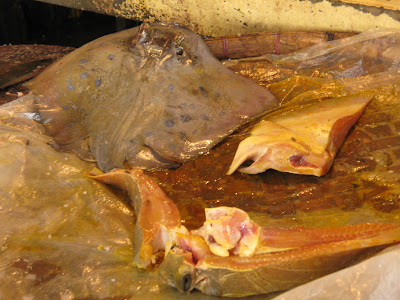 Several times a year I chance upon a pagi (sting ray) or two at the wet market. 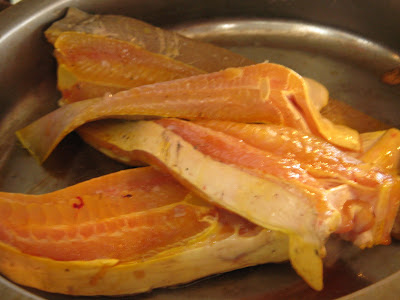 I am told the flesh is more delicate than a fish', and is great in a lugada. Though I am offered some, I always decline since I don't know how to prep one up for cooking. One day.... 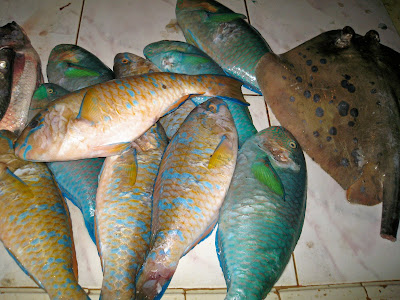 Multi-colored loro, or parrotfish, great big samples of which I've eaten in some small, isolated islands in the Visayas. Those sold in Cavite are not so fresh, so I don't buy because these fish rot swiftly. 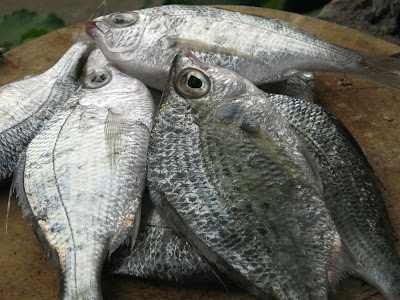 Malacapas are one of my outstanding discoveries. These are delicately-fleshed fish, so sweet when fresh, and splendid in paksiw. 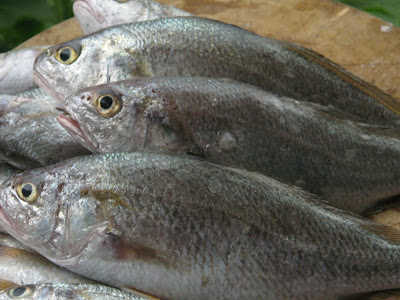 Bakoko, or sea bream. These are a bit bland-tasting - perhaps I haven't yet discovered the best way of cooking them. They are only good in a paksiw because the intensity of the vinegar makes up for the fish' lack of flavor. 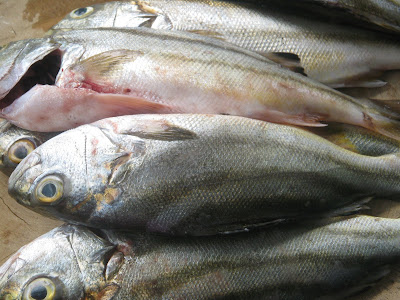 Bagaong, which my brother tells me are plentiful in Pangasinan these days. I think they are the fish my Manila-raised uncle always requested my mother to grill when he visited us at home. He ate them with a kalamansi-agamang dip.

These fish have thick, rough skins, are very fleshy, and can grow very large. They are available almost any time of the year in Cavite. 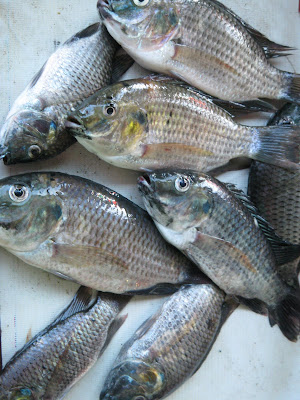 Lastly we have native Cavite tilapia, with blue and yellow specks. These are quite small relative to the Batangas black variety, and are very, very sweet. I always buy a kilo or two of these when they appear. They are caught in the waters of Manila Bay and cost half the price of the out of towners.

They are marvelous in pesa with native pechay, in sinigang, and with saluyot and banana blossoms. I also like them butterflied and marinated in vinegar and garlic for frying, which are called pinindar in Pangasinan.

what an incredible variety of harvest from the sea. if only because of this blessed bounty, i wish i lived there.

Oh Lou, it's not like this everyday. When there's a typhoon we subsist on meats and daing for days! ;-)

lawlaw, especially when fresh, is spectacular when grilled. being a bikolana, pagi is not unfamiliar in our table. we often cook it in gata

Because I have kids, I have an aversion to grilling small fish. But if I chance upon larger lawlaw I'll try grilling them, thanks! Oh yeah, I always hear about ginataang pagi.

talimusak is called bunor/bonor in pangasinan. anyways i am a pangasinense too. i really don't know the spelling tho.

talimusak is bonor in Pangasinan, i dont know if I spelled it correctly heheehe! my lola would have these itty bitty fishies sun dried then fried or pangat/paksiw(?), abukos I think is bolasi...reminds me of rainy days in sta.barbara waaaahh!

Reminded me of my days in San Fabian. In few weeks time I will have a taste again of these. Seen all these but some of them I don't know the name as well. Tatay loves his bonor with kamatis. serar ed kamatis?? abukos is bolasi, loved this paksiw with camote tops.

Many thanks to Pangasinenses Jane, Fleur and Francis. Yes! I knew I was right in remembering bonor and bolasi. I was quite doubtful, though, because there's a smaller one called manga'y gayabot, and I couldn't distinguish between the two.

Dulong! We call that Guno here at Bacolod. :) My dad makes Kinilaw out of that fish and it's very good! We just remove the heads since the fish is really small - real time saver! :)

OMG Steph! You behead dulong? That's OC! We just eat them whole because of their size! Dilis maybe, but I can eat them whole, too!