Cavite City is a narrow piece of land jutting out to Manila Bay, which curves back and points to the reclamation area in Pasay City, so that on clear nights we could see the twinkling lights of the piers, the Mall of Asia, and the various skycrapers as far back as those in The Fort in Taguig City.

The limited soil space explains the absence of agricultural fields, and freshwater ponds. Salt ponds line the highway going to Noveleta, and tilapia ponds dot the succeeding towns of Kawit and Bacoor, but that's just about it.

The main source of fish and seafood, then, is the ocean - represented by three bays surrounding the city. So the Cavite City public market's main offerings are marine fish, punctuated by some Batangas tilapia and a little of the tawilis from far Taal Lake, both of which thrive in freshwater environments.

Which is why I feel a bit at home there. When I was growing up in Pangasinan there were no freshwater ponds. The fish we ate that did not come from the sea were those which were brought back to life by the rains after hibernating in the fields - frogs, snails, tiny crabs, catfish and mudfish, gourami, tiny black tilapia that were bitter so that when I came to Manila I was so amazed by large white and tasty cultured tilapia that were so abundant.

Those freshwater fare were enjoyed only during the rainy season, though. For the rest of the year we relied on the catch from the Lingayen Gulf, and beyond in the deeper recesses of the South China Sea. Even the famed Bonuan bangus are cultured along the shores of Dagupan City in brackish water.

The fish sold in Dagupan and Cavite, then, are similar (with the exception of the bangus, of course). In Cavite, though, deep sea creatures like the loro (parrotfish) are more common, although these fish are also common in the coastal towns of western Pangasinan. In both small tuna (albacore) is abundant, as well as lapu-lapu, pompano, talakitok, caballas, espada, squid, krill, though the last three are in profusion more in Pangasinan.

The tahong's (mussels) presence is much more pronounced in Cavite, though, while in Pangasinan oysters are more valued. But there are several creatures that I only discovered in Cavite. Though these may be very common in other areas, I know nothing about them as they are not eaten, or maybe not available, in the part of Pangasinan where I grew up.

First is stingrays, which never graced our table, and the shadow of which I never saw in the wet markets of central and western Pangasinan. I've seen plenty in the wet markets around the Visayas, and in my weekly market forays in Cavite they appear about once a month, though I haven't strictly observed when exactly or in what weather. And I don't buy, since I don't know how to clean and cook them.

Second is malabanos, as how it is called in Cavite, which I think is another name for palos, or moray eel, or undulated moray (Gymnothorax undulatus). This is a gray eel with black undulations and markings on the skin. The body is long and round, with long and thin cartilagenous bones that separate the thick flesh into segments. It inhabits reef flats in tropical waters. 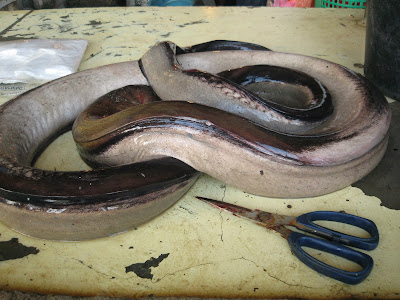 The malabanos is sold in thick slices bathed in luyang dilaw (turmeric), so that it appears orangey-yellowish. I was told the eel looks unattractive as it is, hence the added coloring to brighten it up.

Of the thirty or so regular fishmongers who occupy a stall in the public wet market, plus the ten or so peripheral vendors, only one sells malabanos at any one time. And the eel rarely makes an appearance. But once it does buyers converge on the vendor, and one told me it is delicious. The vendor said it is tastier than pork.

I can't say the same, because I am slightly revolted by pork, but it is very tasty, and very meaty, besides. The flesh is soft and juicy. It is probably even better than pork, health-wise, if it is not as cholesterol-laden as its land-lubber counterpart.

Whenever I encounter anything new I ask the vendor how it is cooked/eaten, and sometimes the other buyers volunteer other tips. I learned that the malabanos is commonly cooked with the turmeric, plus garlic, vinegar and a sprinkling of salt.

And that is how I got introduced to malabanos, Cavite-style adobo, puckeringly-sour and yellow. I believe this manner of cooking would remove whatever lansa is inherent in the eel, though I detected none. I think it would have been heavenly had I thought of adding a stalk of bunched tanglad (lemongrass), much like the dinilawang alimusan I had in Iloilo, but I forgot. 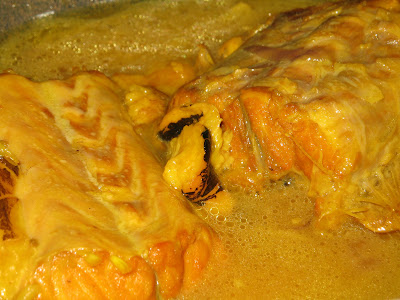 As with other adobo, the left-overs were great fried to a crisp the next day. Mmmm.

Malabanos! I could taste it just by looking at your photos. I grew up in Cavite City and yes my salivary glands have very fond memories of this dish. I believe that the "dilaw" is used to take away the fishy taste of the malabanos. Thanks for writing this article, it made my day.

Kai, I tried to e-mail you at the address you have but they said you were not a member of Yahoo. I wanted to know how you have made out in this terrible weather you have been having. I know what typhoons are like from living in Manila. I hope you are all okay. Please let Mrs. L and I (Roz) know how you are doing. LOL Roz

Oh thank you for the concern, Tita Roz, Mrs. L. I and the family are fine. Some damage to property, but nothing that cannot be remedied.