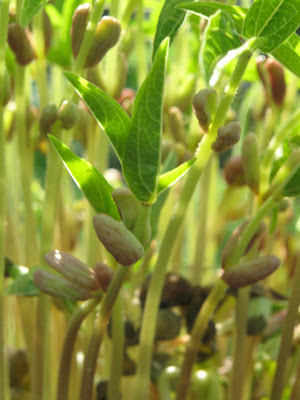 To all who have asked, yes, we were affected by the flooding in Pangasinan, but not to the point that any damage sustained was irreparable. At the least, it was an inconvenience experienced for a few days. As I've pointed out to queries, our distress was nothing compared to what many, many Filipinos in less unfortunate locations have suffered. Nevertheless, thank you very much for the concern.

It wasn't what caused the temporary "hanging up" of this blog. Throughout the entire time that typhoons "Ondoy" (international code name Ketsana) and "Pepeng" (Parma) were wreaking havoc on the island of Luzon, I could have continued blogging. But I could not. And would not.

As this is a blog focused on food, I could not bring myself to write about what was on the table when thousands of families were relying on the kindness of others for their basic needs. Up to now some are still in evacuation centers, subsisting mainly on canned goods (sardines, mostly), or are staying with relatives and friends, and a lot of places are still flooded or closed to traffic.

But life goes on, as it must. As I've replied to friends, flooding in Pangasinan is not really an extra-ordinary event - due to the presence of dams in the surrounding areas - though of course its occurence is not so frequent that it has become a regular, expected thing. But we've had floods, a lot of them, previously, and we survived all of them.

This is not to make light of the massive flooding in Metro Manila - the worst in more than forty years. Certainly, the flooding in Pangasinan is the worst in memory (my memory, short as it still is), abetted, and probably mainly due, to the waters let loose from a dam that is, this time, actually within the province, which just started operations a few years back, and is currently the largest dam in Southeast Asia.

And it was ironic that, in this age of nano-second communications, with the internet and cellphones accessible to everybody - and I mean everybody - the flooding caught everybody by surprise.

I remember, during my first flood experience, when maybe I had been three or four, people were knocking on doors and telling everybody waters from this dam or that were coming. A full two hours before the rushing waters arrived.

And it was like that for the next ones. We experienced floods from waters let loose from dams every five years or so, becoming more frequent as the years went by. But we were always amply warned. So I had time to put my pet turtle to higher ground (my first one swam away with that first flood). And we went to the second floor of the house, carrying perishables. We stocked on candles, and tuyo (dried, salted fish) and eggs - the things that could be bought within the timeframe that we had.

As Pangasinan, invariably, is the exit point for most typhoons or tropical storms - proven again by the forecasted path of the typhoon expected to make landfall by tonight - we treat howling winds and flying roofs and fallen mango trees as a way of life. We stock candles and matches, tighten the beams, buy pails (for leaks), trim our treetops, and leave the trees lying on the ground for a chance to lift themselves up again when their roots have gained enough foothold.

Of course then it was just winds and some rains. Now it's stronger winds and more rains, which inundate dams in a more regular manner. Then more water to evaporate, and more to come down.

But we have no choice. We have to survive. And we must. From the looks of things, heavy rains in an extended stormy season is now the norm. Maybe we have to go back to the nipa huts of old, which were built on stilts on the ground.

I enjoy your blog. From someone that was born and raised in Mandaluyong, (currently living in Tennessee, USA and has been for the last 13 years) your posts are home to me in the virtual world! Even though WE don't leave comments, your posts have a following here in Nashville, TN.

Kai, So glad to know that you survived the typhoons. I remember those typhoons. I was so worried for you. Glad to know you and your family made it. Best wishes, Roz (Mrs. L's Mom)

Hi, Life Trekker, thank you for dropping a line. Hello to all in Nashville.

Tita Roz, thank you. Hope everything's fine with you there and Mrs. L's, too.

I really enjoyed reading your blog. Keep up the good work.

Thanks for the encouragement, whoever and wherever you are.

This topic really hit home for me. I was originally from Pangasinan but living in L.A. now. The flooding really became a part of life, everyone accepted it. You just go in to survivor mode and deal with it. Life goes on.

Keep up the good work Kai.