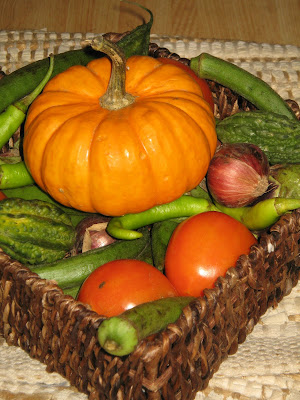 My kids have been bugging me for a pumpkin. But of course, in these tropical isles, there is no way I could find one. Maybe a giant squash, but the skin would be splotched and not as orangey.

But SM has been carrying mini pumpkins for about two years now, and currently sells them at Php220 (roughly US$5) a kilo. I relented this year, and bought three small pieces that weighed in at just over half a kilo, and cost Php150 (about US$3.5). But I don't know how to carve, and don't have the fine instruments necessary for such small fruits. So I just made them as accents on a basket filled with vegetables, also bought from SM, that would make a nice pot of pakbet, or pinakbet, the quintessential Ilocano/Pangasinan vegetable stew.

We don't really celebrate Halloween, anyway. It's not local tradition, only observed in schools and communities that try to subscribe to Western traditions. My kids had started joining trick or treat events three years ago because the community in which we live observe such an activity as a fun thing to do for the kids, although I doubt the organizers, more so the kids, understand what Halloween is all about nor why they say "trick or treat."

But, as I said, it's not a tradition, and this year, before everybody left for their family homes and birth places, the community gathered for a costume party in which candies and food were doled out.

So instead of a jack-o-lantern, my vegetable basket is appropriate for what is actually observed in the Philippines. Halloween observance is negligible, but Undas - All Saints'/Souls' Day, Pista'y Inatey - observed on the first of November, is one of the most hallowed of all traditions that span the entire archipelago. People dust their bags and go home to pay respect to their dead, but more importantly reconnect with those who are still living.

So Hallows' Eve is usually spent on the road for entire families and extended clans, bringing an assortment of candles - in all shapes and sizes and colors imaginable - and flowers and food (usually chichirya) to munch on while making the rounds in the cemetery.

Candles are lighted on tombs. Nowadays candles are extinguished before people left, and brought home because other people will swipe any leftover. Candles are also lighted in front of houses, supposedly to guide souls back home, and in home altars. Some light candles in front of framed photos of loved ones, and offer plates of food.

As in any gathering or reunion, food plays an integral part during Undas. But meals are not festive, but rather traditional. Mainly food available at this time, when rice and sugar cane harvests have just ended. So there's a cornucopia of rice-based delicacies, such as latik and suman and puto. And the highly seasonal inlubi.

Pinakbet, with cubes of soft squash, would be savored by those who live where bagoong is not readily available, or whose family homes don't regularly serve "provincial" fare. So my basket, after serving as decorative dining table centerpiece with two red tapering candles inserted in, will be emptied soon so the vegetables can be cooked. I'm not sure if the mini pumpkins can be had as squash to be mixed in the stew - they feel as hard as ceramic - but they can stay in the center of the dining table, along with the candles and my ceramic corn-on-the-cob and garlic head candle holders.

Hiiii thanks for visiting my site! I did hear about Lasang Pinoy before but I'm afraid it fizzled out even before I started foodblogging. But, thanks again!
Oh and Pakbet is my absolutely favourite dish - no kidding! Since I was a kid I love it with bagoong and fish! :)

Hiiii thanks for visiting my site! I did hear about Lasang Pinoy before but I'm afraid it fizzled out even before I started foodblogging. But, thanks again!
Oh and Pakbet is my absolutely favourite dish - no kidding! Since I was a kid I love it with bagoong and fish! :)