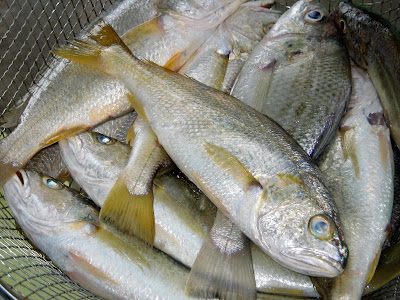 I enjoy going to the wet market of Cavite City. I've been going there regularly for four years now, every week without miss, except when we are out of town on weekends.

I've more or less become familiar with the cycle of seasonal fish. I've come to know that there won't be a lot of fish choices today, even no choice at all, when it rained throughout yesterday.

And I've expanded my horizon and tried previously unknown fish which I see in Cavite. It gets so boring, sometimes, when the only fish I know are tilapia (available year-round because they are cultured, bangus, too, but I don't buy because my loyalty is with Bonuan bangus) and galunggong. I've even come to know that there are several varieties of galunggong, differentiated by the the dash of color on their fins and/or tail.

Actually the seafood offering in Cavite is very much like that in Pangasinan. The focus is on marine fish - which in Pangasinan comes from the Lingayen Gulf extending to the South China Sea, while in Cavite they are sourced from Manila Bay.

But of course there are the differences. Which makes my wet market forays real fascinating. For the most part, there are species I've never encountered before. And it makes my day talking with the vendor and the buyers, asking them how to clean, cook and properly eat the seafood.

But there are also creatures I won't buy. Like rays, and octopus, which I know is delicious but there's nobody in the house who knows how to manage it.

About this alakaak - it looks and tastes familiar, and I'm sure I've eaten some one way or another previously. But I can't truly remember it - it wasn't regularly served in my childhood home.

It's called tuel, or balat, or dulama according to this website, supplying the English name croaker.

It looks like what's called isdang bato in Dagupan, or even bulasi, but I'm not sure. 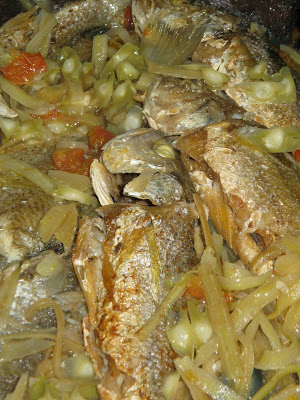 But the way it is cooked is truly unchartered for me. The vendor and other buyers were one in saying that it's utterly sublime pan-seared and sauteed in tomatoes and malunggay pulp - the flesh of malunggay pods scraped from the skins before cooking.

In Pangasinan, people are unabashed malunggay pod eaters, but I've never come across the vegetable served like this. First of all, we don't scrape the flesh like they do in Cavite - we just cut the pods and cook them, skin and all, or with scraped skin, but still with skin.

And second, we might add a fried or grilled fish as a flavor enhancer, but it would only be just a head, never as the main ingredient. Here in Cavite, the fish and the vegetables are both the stars. And it's quite nice, though I'm wondering if we could skip the frying part.

Which just reinforces the principle that I try to live by. That when in Rome and you do what the Romans do, a whole new world opens up to you.

Does this fish have a lot of bones? Perhaps cooking it "Paksiw Style"? or "Sarciado" just throwing my ten cents in it. What you think?

What an incredible variety of fish to choose from. In contrast, most of our diet consists of beef, pork and chicken. I think it is a sorry state of affairs. But fish don't come cheap in these parts.

Masabit, Uncle J, singa bisugo so taway to. Yes, it's great in a paksiw or sarciado.

Lou in San Fran, is't SF famous for the fisherman's wharf? But yeah, compared to the Philippines, seafood somewhere else is expensive.

lou in san fran and Kai,