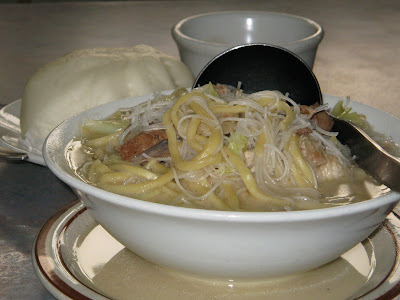 Pansit con Sabaw, De Luxe Panciteria
The other day my kids' yaya was distraught and had to call me from school because she had brought my son his lunch, but the boy was so engrossed in the film showing of Jose Rizal's biopic that he didn't want to take it.

I perfectly understood my son, as I often forget about meals myself when I am involved in something, so I let the kid have his way. But yeah, I remembered the occasion - who wouldn't when a weekday was declared as a special holiday to mark it?

So since it's a landmark birthday even though he's dead, and even though I'm from UP and I'm appropriately brainwashed when it came to Rizal, still, pansit came to mind.

Pansit, the eternal symbol of long life. Despite being almost replaced by spaghetti with the sweet red sauce and sliced hotdogs, still pansit appears in most tables on birthdays, noodles uncut and heaped with sahog. 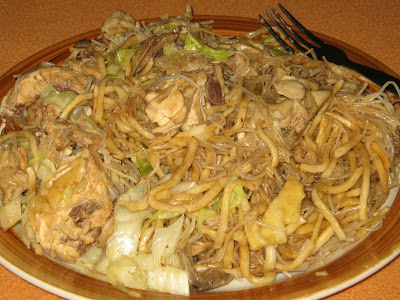 Pancit Guisado, De Luxe Panciteria
I grew up to be a pancit addict, because every time my family ate out it was in a panciteria. In every party we went to there was pancit.

When I turned a teen I became a turncoat and listed spaghetti as my favorite in all those slumbooks of my friends. But onto adulthood I outgrew it, and until now whenever I go home to Pangasinan I seek out my favorite panciterias. Or at least those still operating.

Before all other restaurants, there was the panciteria. I think this is true across the Philippine islands, because in every town and provincial/regional capital I visit there is a dingy old panciteria.

I remember with sincerest fondness regular trips to the pilgrimage town of Manaoag to hear mass, and to have sotanghon sabaw by the numerous stalls in front of the cathedral premises, along with the flat, yeasty, anise-flecked puto.

My mother also used to buy me as a special treat a bowl of sotanghon sabaw with a hard-boiled egg in the eateries in the center of the old Dagupan market, where CSI Plaza now stands. 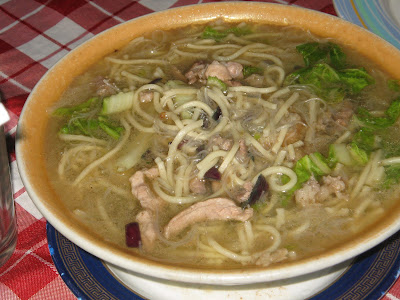 Pancit con Sabaw, New Mangaldan Panciteria
When I grew up the Manaoag sotanghon sabaw suddenly didn't taste as good as it previously did, while the Dagupan market was gutted by fire and was subsequently torn down.

But the panciteria where my lola brought us after a trip to the bank, or a transaction at the various government offices, and where my parents took us for a half-pint of ice cream (literally, as in the plastic pint container was cut in half and served on a plate) with a bowl of pancit con sabaw on the side, still exists.

And exists to my delight. De Luxe Panciteria is still in the second floor of the original building along A.B. Fernandez Avenue, but it has expanded with a new towering building for catered parties in the outskirts of downtown Dagupan.

It had been the panciteria to go to for as long as I can remember. Other panciterias imitated it but came and went. For a time I particularly liked Golden Peacock, despite the sleazy vibe of the place with the mini-skirted waitresses and its come-on as a drinking venue. I actually thought the pancit there was better than at De Luxe's, but not a lot of people shared my opinion, as Golden Peacock disappeared after several years. 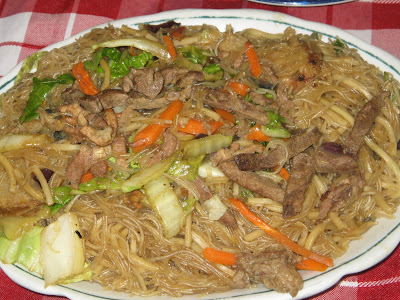 Pancit Guisado, New Mangaldan Panciteria
At De Luxe we only ordered two things - the pancit guisado, greasy miki and bihon noodles stir-fried in lard and soy sauce, with sliced meat rolls and huge cuts of chicken, and the pancit con sabaw, same ingredients but without the soy sauce and braised in chicken broth.

A platter of the guisado usually sufficed for the family, along with some siopao and the ice cream, for afternoon meryenda. The meat rolls were topnotch, and the grease and the toyo coating the noodles elevated the dish to an almost gourmet experience, at that point in time, to my uninitiated palate.

I know no one could go wrong with pancit, whatever the ingredients, the cooking method. Pancit is pancit. But I have never encountered pancit as the one in Dagupan anywhere else in the country. And no matter how often we cook pancit at home we could not replicate it.

The sabaw version was the ultimate comfort food, especially for the rainy days - hot, filling, savory. We used to share a huge bowl, but by the time I was in college I could finish a bowl by myself, along with a whole siopao, too. I am actually craving for one, now, while a typhoon is battering Metro Manila.

Back when I was in college we discovered during one of our pilgrimages to Manaoag that a good panciteria existed in Mangaldan. This was to our advantage because we didn't need to go all the way to Dagupan for pancit on the way home.

The panciteria was called banking, purportedly due to the disability of the owner or cook. Banking in the Pangasinan language means crooked - the owner/cook walked with a limp. But it has since expanded and been renamed New Mangaldan Panciteria. Back then word went around that the cook used to work at De Luxe, which was why the pancit was equally good.

Though the two panciterias approximate each other's pancit, there are marked differences. Banking's pancit is full of pork slices and pork liver, along with generous slices of an excellent meatroll that can also be ordered by itself. It has also more vegetables.

But either panciteria satiates my pancit craving whenever I go home. When I could find the time, and the stomach space, I even make it a point to visit both. Such sentimental value cannot be ignored. Plus, nothing comes close.

The most heartwarming, mouth watering article I've read all week. I'll remember those panciterias when I visit. Talked about this with my partner and recounted how take home pancit in Manila was wrapped in newspaper.

Lou, in Pangasinan it is wrapped in brown paper bags. ;-)

i can still recall my grandma used to take me in that panciteria where CSI square now stands,that was 20 plus years ago and i really love that sotanghon with egg,your story reminds me when i was a little boy,always with my lola wherever she goes. looking forward to take a vacation in the philippines specialy my province pangasinan,i miss the food,places,people and syempre my lola.

Raider, I miss that sotanghon sabaw with egg, too, at the public market which was my treat for going with my mother to Dagupan. I can still vividly picture the counter and the feel of it all, sigh.

It was good to read an article about pancit sabaw. It's one of the best treat that I always like to have during my visit.

My late father anastacio a.k.a bangking would normally woke up around 4am everyday to ready our "pugon" and boil waters for chicken,pork and beef to make a useful broth. These meat broths helps my father to cook a very tasty pansits. Growing up in mangaldan,panciteria is like an everyday fiesta experience, too bad i did not have the chance to inherit my fathers secret in cooking. My sister was the one inherited it but never had the chance to use it. :))
Thanks for the blog about my father's famous pansit sabaw and pansit guisado.

FYI.. My father was not called banking due to his walking condition.. :)) he fell in a "duhat tree" and hit his neck badly during his teen years, after that incident his posture was affected. Naging tabingi na ulo nya due to the neck and shoulder injury. :))

If you visit dagupan city pangasinan, try dagupena as well. They serve delicious pansits and other foods too. :))

Thank you very much for all the info! I'll correct the post, and I'll visit Dagupena to try their pancit. So gracious of you to recommend.


Thanks for the post re Dagupena; I have an elder cousin who now lives in Canada who made me tagged
along with her to Dagupan caught a movie and then treated me to halo-halo at Dagupena. I wonder if it still exists.

Dagupena still exists, but has relocated in Calasiao along the highway to Manila. Nicer building. Just visited it several times recently, hope I get to blogging about it. ;-)