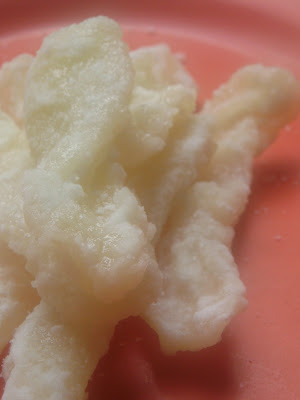 It used to be, before pastries and cakes and ice cream concoctions and cold salads of canned fruit, that candied gundol* was one of two (the other is, by default, leche flan) featured desserts in any festive occasion. And I mean really festive - grand celebrations like Catholic baptisms and fiestas. And probably even weddings.

These occasions, in those more serene times not so long ago, were a field demonstration of home-cooking and bayanihan. And bayanihan - the time-honored practice of helping out your neighbor in preparing for a big event - is needed during feasts, because everything laid on the table, from the appetizers and soups to the salads and mains (actually, it's more of a smorgasboard of main dishes, mostly meat) up to the desserts and drinks, everything is cooked/made right there at home, where the feast was usually held, anyway.

And not just cooked, but the animals to be served were also slaughtered, cleaned and dressed and chopped to the appropriate cuts right there in the premises. Big wood fires were built, around which big, somewhat flat rocks were arranged, so kawas and kalderos (huge cooking pots and pans) could be put atop the fires for the occasion.

Homecooking was practical because occasions such as those mentioned above were usually a barangay (roughly the equivalent of a village) event. Just as everybody volunteers for the preparation, everybody likewise comes for the occasion, no invitation needed. As such, the slaughter of an animal to use all its parts, and the use of home-grown ingredients, including the fruits and vegetables, were economical. 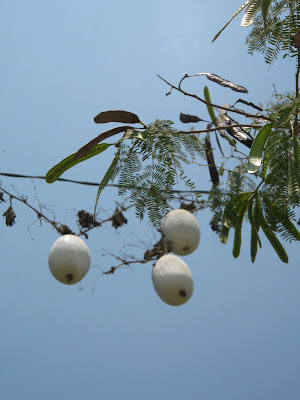 So with the use of gundol, which grows abundantly. I associate gundol with fiestas because that is when it was usually served. But this is actually because our town fiesta is in January, when gundol - known outside the country as winter melon or wax gourd (Benincasa hispida) - is in profusion. The last and first quarters of the year are also choice times for binyag and kasal, and I have attended my fair share of those (what Filipino hasn't?) that's why gundol is festive food, for me. 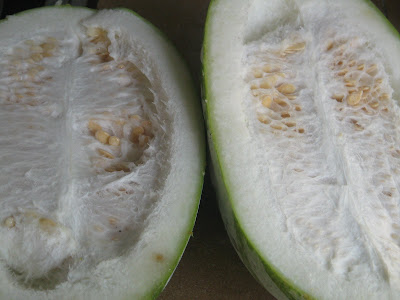 Gundol is a pulpy, oblong gourd with waxy skin. It is similar to upo (bottle gourd), with as many seeds in the center, but the flesh is drier. It is eaten as a vegetable, again same as the upo, usually added in soups. But when I was growing up we never had it as a vegetable. 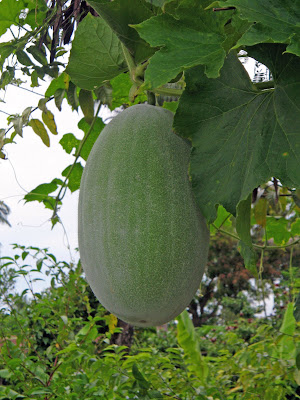 Gundol is always a candy for me. The thin waxy coating on the gourd acts to protect the fresh fruit, so it can be stored for a length of time. Candying it goes further in preserving it. Because it does not need chilling, it is ideal for serving in big occasions, when the ref is normally bursting at the seams and about 30% of the food usually spoils before the event. Its long shelf life is a guarantee that it can be made ahead.

Having said that, I'll add that it can be had anytime of the year, and there's no need for an invitation to a grand feast or wedding, or even a contemplation of gate-crashing a binyag, because it is sold year-round in the public markets around the province, at the puto kiosks in Calasiao, and in Romana's. 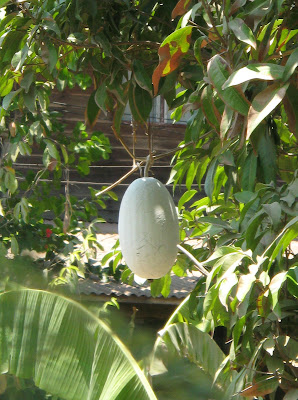 But in case you come across a fresh gourd, it's easy to candy a gundol. A vine sprouts at the backyard of my in-laws, and I happened upon a couple of fruits at the Malasiqui market one time, so I've had practice. Just slice open the fruit, scoop out the seeds, then cut the flesh into long, fat wedges. Drain these, then sun-dry. 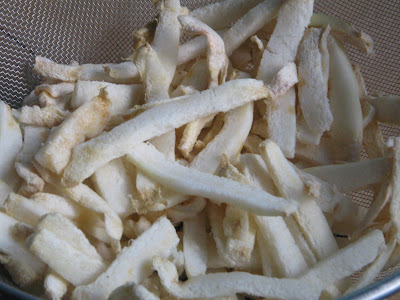 not dry enough, and the slices were too French-fry-thin
- they should be in thick wedges

Three days of sun-drying in the cold, Habagat-fanned holiday season yielded a still moist gundol for me, but I guess about three days in the summer sun is enough. Spread the wedges on a single layer so they dry properly.

When dry enough, mix in white sugar and put on a thick-bottomed pan to cook, stirring constantly. The gundol will moisten, but will harden again when thoroughly cooked. Store in an air-tight container at room temperature, but I like eating candied gundol cold, so I usually store them in the freezer. 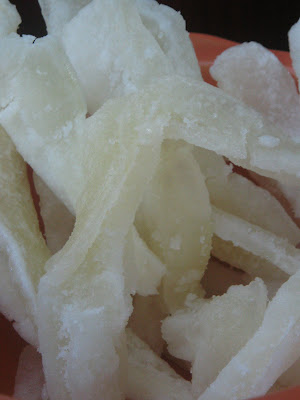 Commecially produced gundol candy are usually harder and whiter than home-cooked ones because of the addition of lime (dena in Pangasinan - the mineral calcium oxide, not the acidic fruit). Gundol is made to steep in a lime mixture overnight, which dehydrates and bleaches the fruit. Which is a good enough reason to make the candies at home.


*The terms gundol and kundol are used interchangeably, and understandably because of the guttural similarities of the two initial letters, but kundol is more a Tagalog term and gundol is used more in Pangasinan.

Please, help me provide kundol seeds or recommend anyone who is selling seeds. I need to plant this winter gourd for my study. That's why I am looking for seeds or seedlings. Hoping for your immediate response. Thank you.

tnx for that lecture about kundol it is termed "malingga" in our town, Imus, Cavite. i remember my lola who then cooked these malingga and i have never chance upon same taste or similar preserve anywhere i go. i guess i'll try ur recipe.. tnx n more power!

Hehe did I sound like I was lecturing? I've never seen kundol being sold in Cavite in my more than five years of staying here. Hope you find frsh fruit and cook them like your lola!

hey :) good day.. i just wanna ask where can i find the fruit? is it sold at any markets here? or there's a particular place or province that sells kundol? i need to know where can i buy one for our project , we'll be making a candied kundol, and the fruit is our only problem.

there's always candied kundol in supermarkets, but the fresh fruit is hard to find. your best bet are provincial public markets, and if you know someone living in the barrios, but I think it is a seasonal fruit, peaking during the cold months.

Where can i buy sweet kundol? Need a response immediately. Thank you.