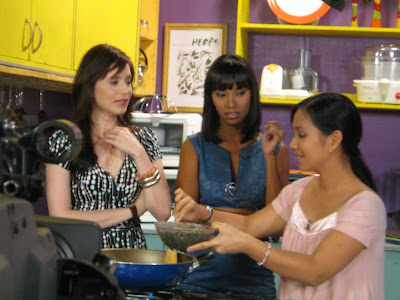 I demonstrated how to cook the Pangasinan malagkit (glutinous rice) delicacy inlubi for the Undas episode of The Sweetlife with Lucy Torres-Gomez and Wilma Doesnt, aired last November 1 on QTV.

I wrote about inlubi two years ago as an entry to the monthly Filipino food blogging event Lasang Pinoy. The food theme that time was soul food, and I specifically focused on inlubi because it is food in season during Undas or All Saints' Day/All Souls' Day. It is highly seasonal, turning up only during this particular time of the year. It is also distinctly Pangasinense, unknown and non-existent outside the province, except probably in the other areas of the Ilocos region. 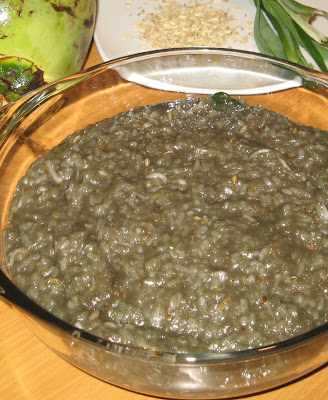 The researchers for the show wanted to feature halloween/Undas food that is clearly Pinoy. Although it is not considered halloween/Undas food in Pangasinan, its season and color - a very rare black - makes inlubi actually the perfect treat. What's more, I failed to mention to the production staff and in my post the fact that the making of deremen - the main ingredient in making inlubi - starts at twilight and goes on for the whole night.

This tradition is held onto dearly that you will never see deremen made during the daytime. A bit creepy, adding drama to the whole process, although one enlightened lola explains that the preference for making deremen at night may be because of the burning involved, thus the need to do it during cool hours. I may add, it is also rational that it is made during a time when it will not interfere with important chores. Since deremen-making is only seasonal, the family is usually involved in other activities to sustain a living the year-long.

The color and the process of making it are not only the distinguishing features of deremen/inlubi. Deremen is pinipig (young glutinous rice) burned in its husk and pounded, so that when cooked into inlubi it smells and tastes not only of the green ricefields during the rainy season, but of the burning ricefields after harvest as well.

Deremen is not planted for mass production. The difficult process involved does not command any premium - it is sold for roughly the same price as regular malagkit. Planting areas are also limited - priority is given, naturally, to the staples rice and malagkit.

These are the main reasons deremen cannot be found anywhere else - supply is only good for the province's demand. It does not keep, too, since it is young rice and still moist. So Pangasinenses enjoy inlubi only during deremen season, and wait for next year for another reunion.

For those who can travel to Pangasinan, deremen can be found in most public markets of Pangasinan towns and cities from October to early December. They're not found in stalls, vendors usually sit by the entrances or along the sides, with a bigao (bilao, woven winnowing tray) of the stuff in front. Buy the blackish-green type, not the very black one. The grains should be soft and a bit flat, not puffed up. The aroma is of burnt/smoky pinipig.

A can of deremen usually costs Php15.00. When asking, say deremen with all the e's pronounced like the e in brother, accent on the last syllable. Photo can be found here.

During market days (twice a week, schedules vary per town), cooked inlubi can be found sold with other kanen (kakanin, glutinous rice specialties) like puto and latik. But I should say these are of inferior quality. If you can procure deremen, it is much better to cook inlubi yourself. It is very easy, the cooking process simple and does not involve any complicated maneuver. You don't even need to have long cooking experience.

Procedure
The inlubi is best eaten cool. It will keep for about two days, longer if refrigerated. It can be eaten straight from the ref, or if preferred, heat in an oven/toaster on low for about five minutes and let cool prior to serving. 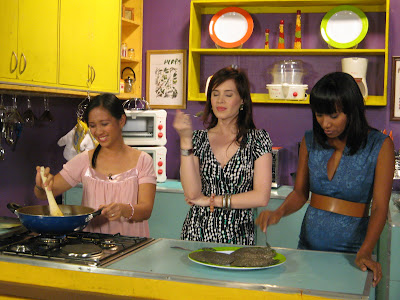 I saw this episode and could see that Lucy and Wilma genuinely loved what you cooked. They didn't look like they were pretending (which is ow I feel with other shows). I can see that they both got several helpings. Way to go.

I've never tasted this delicacy but it looks yummy to me. It maybe easy to those who have been used cooking it but to those who are new to it like me and with some of the ingredients are hard to find, I think it's better to buy one if I would be lucky to find it in a specialty store.

copperfish, it is yummy! i accompanied kai during her stint in the sweet life. all i can say is that EVERYBODY loved her inlubi! even when the taping was through, a number of staff prod members helped kai finish cooking the rest of the inlubi for them to savor!

Em Dy, maybe that's due to the fact that nothing tastes like inlubi - it's really exotic, and new to the tastebuds.

Copperfish, I hope you can find a cooked one, though I doubt it. Some of those who watched texted that they are going to try it with regular malagkit. Of course that would be a wholely different kakanin!

Ed, thanks of the support, as always!

i really missed this episode . . . any chance of us viewing it on youtube? :-)

when are you gonna cook this again? you know where my office is . . . hehehe

Immensly informative and well researched. I was borne speaking Pangasinan but never learned to write the dialect. Whilst I was munching on pepitas I was reminded of the taste of deremen; tried to google it as dirimin only to go back searching for pinipig as I couldn't find any entry for the latter spelling. Luckily i was led to your site. Thanks to you I can now think of inlubi in my dreams as I don't think I will ever find any in my vicinity. More power to you and thanks for sharing.

This is an abbreviated version of the classic inlubi ... absent are the essential ingredients tugi (a tuber), kalot (also a rootcrop) and abiang, a fruit that looks like small coconuts ... diced kamoteng kahoy will also perk it up ...