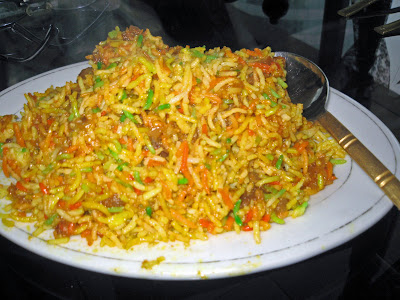 
I first ate at New Bombay years and years ago, when it was still New Bombay Canteen, a nondescript hole-in-the-wall affair along Buendia near the railroad tracks at San Antonio in Makati City. I was taken there by a Filipino friend, with whom I shared unexplained affinity with spices (well, my friends explained it as due to my unproved Indian/Middle Eastern ancestry evidenced by my physical looks). There were only about five tables or so, and Pinoys eating there numbered less than the obvious Indians (by the looks, excluding me and the friend) who frequented the place.

I was charmed by the homey ambience of it all - plastic furniture, menu in a plastic folder, the proprietress taking the orders herself and making suggestions along the way, who then proceeds to the see-through kitchen to cook your choices. It was also the only place I know that carried an image of the Sto. Nino placed on an altar side by side with a photo of the Lord Vishnu.

The food was homey and satisfying (as far as I can tell, being no expert in Western Indian cuisine), and came to your table freshly cooked and piping hot. The menu is segregated into cheese, meat & poultry, fish and vegetarian. We would order one from each, always to be finished off with the heavenly dessert gulab jamun. It was at AUM where I had my first gulab jamun, and it turns out it is the best hereabouts - I've had countless ones from then on, even cooked one at home, but nothing compares to AUM's.

When the construction of the condominium buildings started, New Bombay Canteen was demolished along with the many commercial stalls in the area. New Bombay moved to a better location along Dela Costa Street in Salcedo Village, at the ground floor of the building beside Trafalgar. Having been used to the original place, I was a bit unnerved by the new one - with its shiny steel walls and furniture. But the service, and more importantly, the food, remained the same that I felt at home right after the first visit. The area was more or less the same, with the same menu, and the same couple manning the kitchen.

But I daresay it was even more unsettling to see AUM New Bombay opening at The Columns several years after the relocation to Salcedo. From outside, the ceiling-high glass windows showed a sumptous setting that I couldn't believe it was the same AUM New Bombay. There were even what looked like ornate curtains framing the wooden furniture. I was so intrigued I had to check. 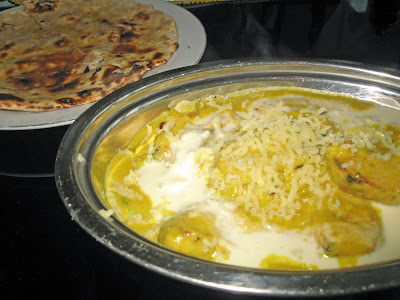 
And yes, it is the same AUM New Bombay. It's funny, despite the new, well-appointed location the menu is still in the same plastic folder. But the better news is, despite the more visible location which I'm sure commands sky-high rent, and the new heavy utensils, and the new wood furniture and the curtains, plus a chandelier and expanded dining area in the mezzanine, the prices haven't gone up at all. No more multi-cultural altar, though.

As with Chinese restaurants, my experience with New Bombay is that ordering Indian food can be a hit or miss - you need an expert to guide you so that the dishes you order complement one another, making for a good meal. As it happens, most of the dishes at New Bombay have sauces, and whatever their names are they tend to look and taste the same. So even if you order a cheese dish plus a fish one and then a chicken, if they have sauces (even the grilled dishes are served with sauce) you will end up having three dishes with one and the same taste.

I have learned to beat this by ordering only one dish with sauce (cheese or chicken) with roti or chapatti for dipping, to be accompanied by a fried dish (potato samosa is good), a curry, and a biryani (a must! any variant is good). A fresh salad (cucumber-yogurt would be nice) or intermittent sips of sweet lassi will go a long way in cleansing the palate in between spoonfuls of each dish. 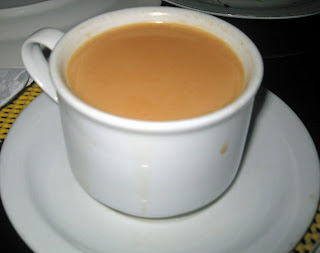 I always enjoy a cup of Indian tea after dining at AUM New Bombay, which is very similar to Thai milk tea, or nan chai, if you will, that is hot. It serves to settle all the spice-laden food I've eaten, and the taste and aroma of cinnamon, cloves and cardamom are all very relaxing that sometimes I suspect I'm very near the state of nirvana. 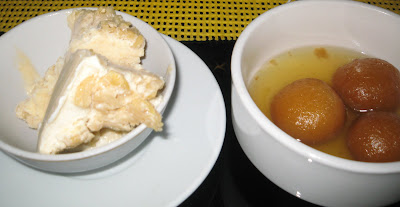 
But of course no Indian meal of mine is ever complete without the soft, sweet gulab jamun for dessert. It is great with tea, with or without milk. Though there is now a very good alternative - the Indian ice cream kulfi, buttery and milky, not airy like regular ice cream but denser, liberally sprinkled with nuts. It gives me a quandary nowadays which to choose, because it is impossible to order both for dessert as they are too sweet to eat together. But it is just as well, it gives me a good excuse to eat more often at New Bombay. Gulab jamun today, kulfi tomorrow. It's near Christmas, after all.

My wife and I haven't eaten at New Bombay for years now since we tried dining at another Indian restaurant called Queens along Jupiter Street in Makati.

I'm glad to know they haven't changed their prices even though they moved to new digs.

Oh yes I've heard about Queens, it's next on my list!