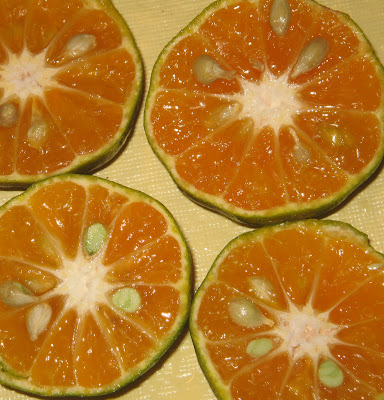 [Dalanghita, Dalandan, Sinturis, Tangerine Orange, Citrus nobilis]
A burst of sunshine for these stormy days so late in the year.

Laranghitas are now in full season, providing a refreshing respite from tart kalamansi juice. Small globes are now being sold for Php10/kg, though I'm sure these are still bitter, or sour, at the least. The regular-sized ones can be bought for Php15-20/kg, while the price of kalamansi has shot up to about Php30/kg, and they're so big and yellow that it's not surprising their characteristic tartness is missing - you'd need about a kilo for a liter of juice.

There used to be a laranghita tree growing beside the ground floor balcony of my paternal grandparents' house. It was at the edge of my lola's garden, where she tended mainly tiny pink roses, ringed by kalamansi shrubs, a small lukban (suha, pomelo) tree, some fortune plants shooting up into the sky.

The laranghita tree only blossomed in season, but when it did, it did so with great abandon that we didn't know what to do with the fruits. Back then we ate laranghitas like imported oranges (which were very rare two decades ago) - peel and eat the segments, sometimes dipped in some salt if they proved a little too sour. They're sweeter than the navel oranges, but more tart than mandarin oranges, which were unheard of at the time.

Sometimes, when we've suffered enough sore molars from eating too much laranghita, the aunties substituted the kalamansi with laranghita in the bagoong-kalamansi dip that is the standard accompaniment to any fried or grilled fish.

When my lola got sick and eventually died, the laranghita tree in her garden bloomed out of season. During her wake the tree was so heavy with fruit that the branches were almost bent, and the ground was littered all around with the fallen globes. If we had discovered then that laranghita made good fruit juice I'm sure we would have served it to those coming to mourn with the family, and so would have saved all those wasted fruits. Anyhow, several weeks after my lola's funeral the laranghita tree dried up and died, and I have bought my yearly dose of laranghita ever since. 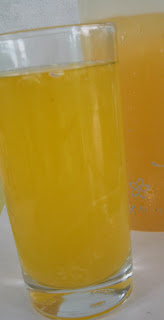 I can't remember exactly when I started juicing laranghita fruits, but it definitely was way before all this bottled juice craze. I recall that some visitors to whom we served the juice were surprised what it was made of. I wonder why we didn't discover it earlier since it's easier to squeeze than kalamansi because its size enables the use of a juicer, and the juice has such a vibrant, sunshiny taste.

Laranghita juice, and especially dalandan slush, are so sparklingly refreshing that I wish laranghitas bloom in summer. I'm glad that we as a nation discovered dalandan juice. Though I have so much against preserved fruit/juice for extended enjoyment out of season, at least we are maximizing the potential of our local resources.
Posted by Kai at 3:03 PM