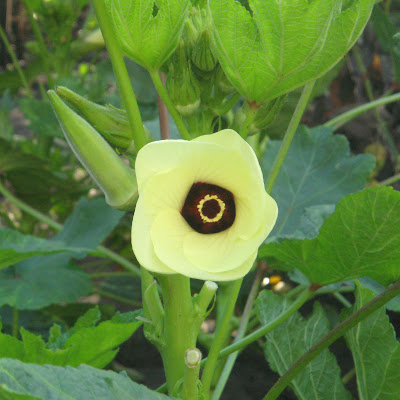 [Okra blossom]
I grew up among houses, and trees. The trees were fruit-bearing, or provided vegetables. But plants that bore vegetables and fruits I never knew. We had a supply of fresh fruits and vegetables from my grandparents' kasamak (land tenants), who tilled and planted many small tracts of land in the barrios.

We lived in the poblacion, and while there was enough space for planting, vegetable-bearing plants in your front lawn was not in vogue. So I was never intimate with plants, except for the ornamental ones.

It gives me so much wonder then, and joy, to be seeing vegetable plants grow up and bear fruit in the garden just by the building where I now live. I didn't know vegetable flowers could be so pretty. If not for the sustenance that they would provide later, I would have picked several of these and put them in a vase to brighten up our sala (living room) and dining table.

The gardener explained that after several days the petals of the okra flower fall off, leaving the yellow-crowned burgundy pistil to develop into the fiber-laden okra fruit. If not for the baby eggplants that have sprouted, I would have mistaken this bloom to be the flower of a weed that grows like grass and populate untended lawns. How charming that eggplant flowers are also purple-colored. These flowers bow down to the ground at night, then look up again as the sun touches them. 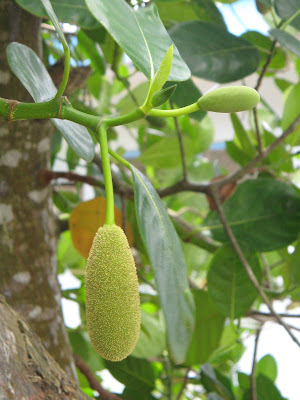 I recognized the tree that bore this, but if this bud were plucked and presented to me on its own I could not have ventured a guess as to what it was. It is the newly-developing jackfruit or langka/nangka, which will eventually grow up to be so huge and full of thick spines.

It reminded me of my babies. They were all born almost bald, as I had been. All they had were very short tufts of fine, downy hair, every single one of which proceeded to fall off before the babies turned two months old. But now my first two kids have very, very, thick hair, like mine. Thick, not just in volume, but also per strand.

Who would have thought this cute baby would grow up to be so prickly?
Posted by Kai at 10:10 AM

that is a langka or jackfruit tree