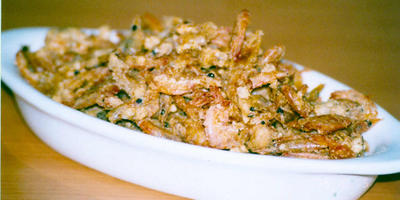 The theme for this month's blog party is Big Game Night, or finger food and drinks you would serve during a big sports game, as hosted by Stephanie of Dispensing Happiness.

I'm not a big sports fan. I'm into swimming and snorkeling, running occasionally, and trekking/hiking and spelunking in my other life, that is, when I was still single. I tried to learn tennis, but now I just watch Maria Sharapova screaming her guts out. And that's just about it. Individual sports that do not attract fanatic hordes in the likes of The Perfect Catch.

But the Philippines is a sports-loving nation. Er...a basketball-loving nation, that is. The violent tussles on-court are almost always replicated by fans of the respective teams, in bars, in offices, in the streets. During championships, offices are emptied out earlier than usual, and the games are the constant buzz the following day.

But I'm not a basketball fan, and neither is my Flynn.

The Philippines, that is to say, Filipino males, are also very passionate about sabong. This is a unique game of pitting specially bred, trained and armored roosters called Texas fighting cocks, one against one, in specially-designed cockpits called sabungan. The importance of this sport (although it is a sport for and by chickens, and to the death at that) cannot be over-emphasized - there is a cockpit in every town around the country. And the stakes are high. But it is a levelling sport - all types of the Filipino male indulge in it, from the poorest who enters into a bid his last money which could have gone to a meal for the day, to the richest mayor, congressman, and senator.

But ladies are not allowed inside the cockpit, and I will not cook for a winner who will not let me enjoy the game.

So what am I doing in this party?

Ahh, but Filipinos transcend all kinds of differences when it comes to any sport which has at stake a world title. We unite as one, and support and cheer and feel so proud of our compatriot in the international stage. So far, we haven't collected a lot, very few from team sports, but we get luckier in the individual sports.

And so everytime "The Pacman" Manny Pacquiao, "The Magician" Efren "Bata" Reyes, or more recently "The Lion" Alex Pagulayan, and the others of their blessed kind, take on matches, we crowd out one another in front of television sets, and lots of money change hands. The general feel is that the future of our nation hangs on every lefthook or fireball.

And so this party is for our much praised and, may I say, richly-endowed (besides their winnings, they come home to millions of cash prizes from the president of the republic and other private sponsors) champions. And their fans, the entire Filipino nation.

Crispy Shrimps (photo above)
Rinse and pat dry small, fresh marine shrimps. Dredge in flour. Heat up oil in a deep pan over low fire. When the oil smokes, or sizzles when sprinkled with water, put in the shrimps by batch, taking care to separate each. Remove from the oil when they turn golden brown. Drain excess oil. Repeat with the remaining shrimps. Sprinkle with table salt and finely-ground pepper. Best dipped in spicy vinegar.

The real Havana mojito is made like this:
1. Muddle fresh mint leaves and a slice of lime in the bottom of a tall glass.
2. Cover with sugar.
3. Top with ice.
4. Pour white rhum about half-way.
5. Top with club soda.
6. Stir well and garnish with mint leaves and lime wedge.

There is no bartender in the house, and I cannot ask somebody watching the game to mix the cocktails, so I tweaked some of the ingredients so they can be prepared well in advance, so all I did on game night was pour this and put this in. 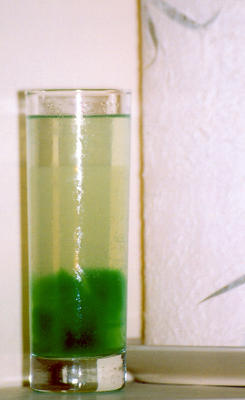 Drinks with bits and pieces of leaves in them are bound to be a problem with some machos, so I made mint jellies the day before, pouring in Bardinet mint syrup in boiled, unflavored green gelatin, with the water reduced by a cup.

Then I bought calamansi-flavored soda, so that took care of the lime, the soda, and the sugar. Sprite or Mountain Dew are also good alternatives.

So during game night, just a drop of mint syrup went into each glass. I then put in the ice, poured white rhum and the soda, and then topped everything off with cubes of mint jelly. In the photo, the jellies have sunk to the bottom of the glass, but they color the mojito nicely, and they are fun and refreshing to munch on after having finished the drink.

Some real machos found the mix a tad too strong, so I reduced the rhum to just a fourth of the glass. 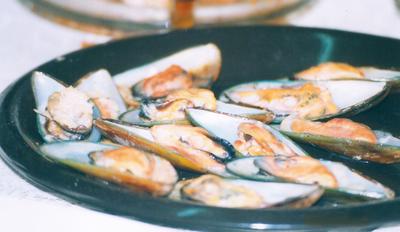 Baked Tahong (Mussels)
This is a very economical dish, mussels being cheap but packed with nutrients.
1. Rinse mussels freshly bought from the market, and trim out the weeds along the shell edges.
2. Pop them into the oven, taking them out when the shells have opened. Alternatively, the mussels can be arranged on a grill over live coals until they open.
3. Spread thinly on each mussel a mixture of melted butter, grated cheese, finely-minced garlic (I pound them with a pestle), and some salt and pepper. The amounts vary depending on your preference for cheese and whether you like them garlicky or salty.
4. Put back in the oven or on the grill for about 2 minutes, or until the cheese melts, or until crusty if you like.
5. Detach the empty shells and serve with forks or party toothpicks.

My Flynn likes to slurp them from the shell.

I loved your idea of jelly-ing the mint for the drinks.

Thanks for joining the party...again!

Wow, what a great idea for making mojitos! I confess that I have absolutely no creativity when it comes to drinks so this is one idea I really want to steal :)

Mojito looks great... I might try this one day Kai, thanks for sharing..