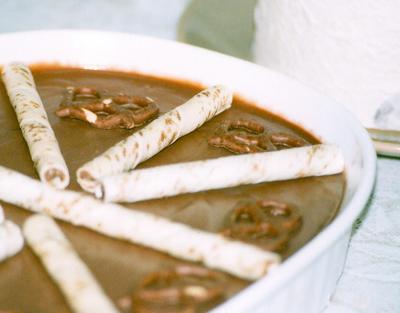 [Chocolate Truffle Pie]
For this anniversary edition of Sugar High Friday, Kelli of Lovescool is turning over to the dark side with the theme Dark Chocolate in honor of the inaugural theme, white chocolate.

I made this pie for my Flynn's 30th birthday, from a recipe so kindly given by blog party host Stephanie, who whipped it up for IMBB19 - Vegan.

I was so intrigued about a chocolate pie made with tofu in lieu of cream/milk, that I wanted to try making it, but more than that, I wanted to know how it tasted like.

Well, it tasted wonderful, with just a hint of tofu taste, which the guests at the birthday party didn't seem to notice. It was so rich, as Stephanie said, but it was A-okay since it is healthier than the regular chocolate pie. I love how it is not so sweet, and how the peanuts and the chocolate are vying for dominance. It is reminsicent of our beloved Choc-Nut, the local powdered chocolate bar that crumbles in your hands and powders your lips, which is so popular that it has been made into a flavor for a sandwich spread. It comes close to choco-hazelnut, too.

Thank you very much, Stephanie! I am a pastry fanatic, and this is a turning point for me - I can have my healthy cake and eat it, too!

And it was so easy to make, my yaya* was able to make a second one just by observing me.

Stephanie's original recipe calls for processing a cup each of semi-sweet chocolate chips (melted, I used bitter chocolate) and peanut butter, a pack of silky tofu (tokwa in the Philippines), and half a cup of pure maple syrup. I substituted honey for the maple syrup. This is poured over a graham crust, refrigerated until firm, then topped with chocolate pretzels. I added some cappuccino cream Stikkos for contrast.

My food processor groaned in agony because the mixture was so dense, so for a bigger pie (I made several for the party), I doubled the ingredients, added a pack of cream, as well as poured in another pack to the melting chocolate. This pie was lighter in density, though heavier in saturated fats, and the processor did not complain. It took a while longer to firm up in the refrigerator, though, but it held up nicely.

All the pies were gobbled up, with just a slice left, but this one was gone, too, the next day when a visitor came by for a chat.

But it's ok, since it gives me an excuse to make another one. Right now, I'm thinking of other ways to do it, like mixing in some marshmallows, perhaps, or some chopped nuts....Then the toppings, other flavors to add to the pie like hazelnut....the possibilities become endless.

Related Post
The Filipino Tsokolate
Posted by Kai at 10:40 AM

kai, i love the use of stikko's and pretzels -- ingenious and adds that definite pinoy touch! so when are you going to invite me over for a bite of this? i'll try to make this one of these days -- my imbb entry was also a vegan brownie "cake" -- but now, inspired by you, i'm thinking of topping it with some crumbled choc-nut!

Kai, I'm so happy it worked out for you! And it looks fantastic.

I've never had a cake with tokwa in it. It intrigues me no end! I should try this one time. Thanks for sharing Kai. :)

lol. did you know that chocolate was banned in switzerland for many years. read this