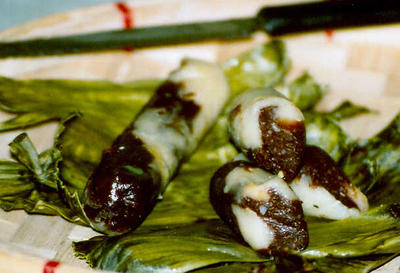 My UP org batchmate, who subsequently became a best buddy and college days karamay, or life-saver, to be more apt, and on to being a constant movie and food adventures companion, is featured here today. He actually wants to start his own blog, but hasn't gotten the motivation to do so yet, so I sort of twisted his arms so he could join LP3 sans a blog. Being the best friend that he is, he didn't say a word, and came up with this entry. 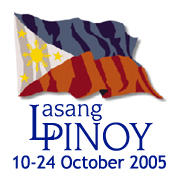 Kai was a bit hesitant when I told her that the street food I was going to write about for Lasang Pinoy 3 is moron, a sticky rice delicacy from Leyte that’s been sprouting in Metro Railway Transport (MRT) stations all over Metro Manila. I sensed that the crux of her hesitation was probably that my suggested subject matter didn’t quite fit her notion of what a street food should be – popular, ubiquitous, cheap and found along, well, the streets. (Should I include dirty-looking as one of the characteristics of a true-blue street food?)

Moron is not that popular yet, being fairly new in the street food business (though it’s slowly gaining recognition among the middle-class). I only started noticing the moron stalls a couple of years back. It’s ubiquitous in a way, if you consider the MRT as a major transport mode today for hundreds of thousands of commuters in the metropolis. Cheap it is, at ten pesos per piece. The only conceptual hitch is that moron is not sold along the streets but in MRT stations. But who cares? Personally, street food does not necessarily have to be sold along the streets. As long as it’s cheap, popular (or starting to be), and found along accessible transport routes, it is street food! 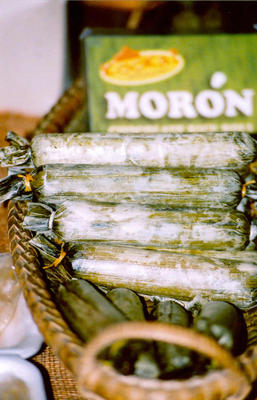 So why did I pick moron as my subject matter? To be honest, I wanted to choose a more traditional Filipino street food like fish balls or banana-que. Kai wanted a more exotic type. When we passed by an MRT station one afternoon, I found my topic like it’s the missing puzzle to the mysteries of the universe. Right in front of us was a moron stall, with a bundle of moron neatly presented on a folksy wooden container. I bought some for us to taste. It had a delicate taste, quite simple but flavorful. It’s made from grounded malagkit rice flavored with high-grade chocolate and wrapped in banana leaf. It looks like a big fat cigar actually, sans the harmful substances. I’ve heard that almost every town and city in the province of Leyte produces the tasty and filling snack. It’s perfect to eat anytime of the day – in the morning if you’re in a hurry to get to work but haven’t taken breakfast yet, during lazy afternoons for a quick energy-booster, and in the evening as a pang tawid-gutom (stomach-filler) before having dinner.

I quite developed a liking for moron. It’s a street food that’s tasty, filling, healthy, and above all, uniquely Filipino.

wow, thanks for joining us, edwin -- awesome post (and thanks for hosting, kai)! we'll be waiting for your own blog too. i've been promising to make my kids moron -- they're suman and chocolate fans already and eat their suman like mom, with milo! love your title about this "reluctant" street food. can't wait to get home and find an MRT.

Hi Edwin! Hi mare! ... The next time I take MRT.. I should look for this moron...sounds and looks delicious! ..

Hi, Mareng May, thanks for reading all the LP3 posts.

Besides the moron, the stalls at MRT stations also carry the binagol, that sweet gabi (akin to taro) delicacy in bao or coconut shell. I love binagol in Leyte in situ (it spoils easily), but according to Edwin, this particular binagol is award-winning. Maybe I should write about it in a new post, or maybe you're willing to take the challenge again, Edwin?

moron, what a cute name! this was my first reaction when my friend told me the name of this suman-looking delicacy. i had my first taste of it (home-made though) while visiting a friend in leyte, day before mount pinatubo reupted!

Mike, will try to post a recipe for moron soon.
Lani, hmm, it's not even close to churros, more like the way we drink tsokolate, with suman, but this time, pinagsama yung chocolate and suman, hehe! Will post about this, too!

To distinguish this dessert from, ahh, the English meaning of the term, stress is put on the second syllable, not on the first.

i just had the time to go thru all the posts grabe sarap nito ..

Hi Kai! Hi to everyone who commented! Never thought you'd be interested in this "lowly" provincial food. Leyte should thank me later for promoting their native food sans the cost of advertising, hehe. By the way, forgot to tell you guys that moron also has nuts (I'm just not sure if it's peanut or kasuy). Sorry for this misstep. Thanks again.:-)

Hi, I was googling for a binagol picture, I got this moron entry instead. Can I use your photo in my blog and I'll credit your blog for it. In return, I can post an authentic moron recipe ;-)

Hi Kai! Wow,almost 13 years after, the article is still alive! Sadly, it outlived its subject matter.