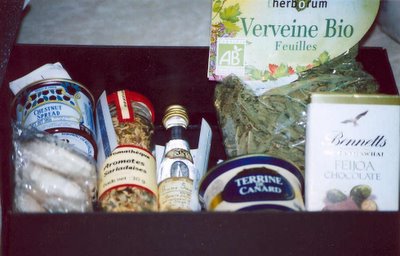 Here is one eagerly awaited food package, because my secret Santa revealed herself prior to shipping and told me where she is: France, in a suburb north of Paris! So close to Clotilde, whose blog we all read and who was the inspiration for the food swap: we were, in one way or another, active participants at the Chocolate and Zucchini forums. It was organized by Eileen, a schoolteacher in Belgium and, in turn, the recipient of my package.

The contents are an assortment of products you would commonly come across and use in your kitchen if you are French and living in or near Paris, plus a touch of New Zealand where Bekbek, my secret Santa, was originally from. So nowadays I'm feeling a bit like a French girl, tasting and thinking and searching for recipes that could use what dear Bekbek sent.

Bekbek was in the Philippines (where I live) for a short time as a volunteer for Habitat for Humanity, helping in the building of houses for the poor in the southern city of Cebu. In fact, she tells me her nickname Bekbek, short for Rebecca, was given by the Filipino family she lived with. It's so heartwarming to learn unexpected facts like this, which more than spices up the package sent. Making it priceless.

Since Bekbek got acquainted with Filipino food, she strived to send me things which cannot be found or are hard to find in the country. And she did succeed!

I am now a proud owner of a can of chestnut spread, because chestnuts are now in season in France. This I want to try like how Bekbek suggested, with a thick creme fraiche (cream cheese? I always read Clotilde using this) or creamy yoghurt. A bottle of Aromates Sarladaises, an herb mix of classic French tastes. A bottle of an artisanal wild plum eau de vie, a digestif which comes with a warning that it has a real kick, so I'm taking just a sip and share this with my Flynn.

A pack of organic lemon verbena, a very common tea infusion in France, also grown in the family garden. Then a travel-stained bar of Bennetts Feijoa Chocolate that must have traveled around the world from New Zealand to France then back to the Asia-Pacific. I appreciate Bekbeka's sharing a piece of her NZ stash. Yahoo yielded the data that feijoa, also called pineapple guava or guavasteen, originated from the cold mountains of Latin America but are now cultivated mostly in Australia and New Zealand. My first time to meet this fruit.

If you would notice in the photo, each item had a folded paper inserted or wrapped around it, which contained descriptions of how it is used. I promised to post once I've tried everything to give my impressions, but I might already be running late, so I'm just posting now, then will take each item one at a time in succeeding posts. Here's hoping I could cook like a French!

There is one I've tried (and subsequently consumed, all in one sitting), though, the rousquilles en fondante. I love vanilla, anise and donuts. Fondant icing, too. Unbelievable that they all came together in one single pastry and produced a heavenly taste. Need I say more? 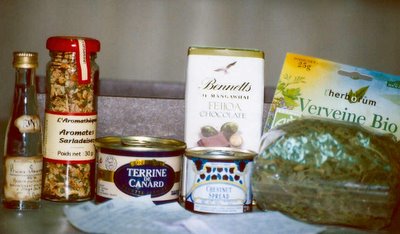 Warm hugs from the Philippines, Bekbek, and Mabuhay! Thank you for giving me a taste of France and new Zealand, and for sharing a piece of your life story.

oooh, those look so good! you're a lucky gal, kai. that feijoa chocolate is intriguing. i didn't like feijoa last time i had it but chocolate should work:D

It works, Stef, or I think so ;-) I get something gritty after the chocolate has melted in the mouth, tasting of guava and something else, sweeter and tangy.