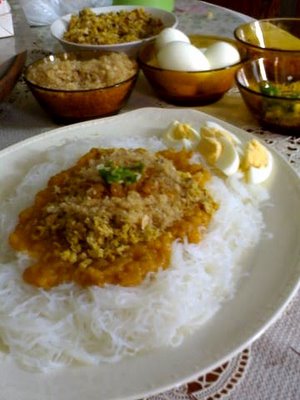 I still had a couple of bottles of aligue (fat and meat of kape or shore crabs) left over from Flynn's birthday party, during which I served linguini with aligue sauce. I had been reserving them, plus a subsequent purchase of a can of Razon's aligue, to flavor a palabok sauce to give it a new twist.
I had been toying with the idea of a pancit palabok as birthday noodles for some time. To give a fresh dimension to the pancit served in birthday parties. Pancit palabok is not commonly served as birthday noodles. Actually, pancit palabok is not commonly served in my part of the country. The preparation is seen as too laborious.
The perfect chance for my laborious-loving self came when my baby girl turned one last week, and her dad wanted to throw a children's party. I thought a kiddie birthday party was a good venue for serving pancit palabok - my three-year old son (not counting his dad and mom) adores Jollibee's pancit palabok, more than spaghetti. Surely, thin noodles smothered with a thick sauce would appeal to kids, of all ages.
But in truth, I had a score to settle with pancit palabok. The one and only disaster my brother and I came up with while preparing our family Christmas feasts over the years involved this dish. That time, many Christmases ago, our youngest brother was the one who bought a kilogram of fresh squid for mixing in the sauce. He came home with a foul-smelling pack, which he proceeded to clean. When we mixed it in, the palabok sauce turned black as midnight, like it knew it was going to be served for noche buena, appropriately at midnight. Like a black joke.
We had no choice then, but continued the cooking. We had planned the menu months ahead, and we had not counted on something going seriously wrong. We mixed in the sauce and the other ingredients with the noodles, probably hoping it would change color, but no, it remained black, blacker than mud, and we then had a black, foul-smelling mass instead of a nice, orangey, aromatic pancit.

If I knew then that I would be running a food blog someday I would have taken a photo for posterity. But all I have now is the memory of that night - we were all howling with laughter, poking fun at the palabok negra, as we came to call it, and which was left in all its dark splendor on the noche buena table, nobody daring to touch it. We conveniently forgot about the rest of the sauce fo days, and when I happened to open the pot it was sitting in, I saw the sauce had turned green. A green palabok is worse than a black palabok, and we kids fought over who was going to throw it out and clean the pot.

This incident became the "sure-fire-anecdote-to-get-a-laugh" for many a years to come, especially during subsequent noche buenas. Needless to say, we never cooked pancit palabok again.

Until last week. And this time I was avenged. I had a very orangey sauce, helped in part by the hue of the aligue (Navarro's is bright orange, Razon's is pale), and in part by some powdered achuete. I still put in fresh squid, which I bought myself and cooked prior to mixing in the sauce, to be sure. I skipped the shrimps, though, since the aligue more than made the palabok rich enough. 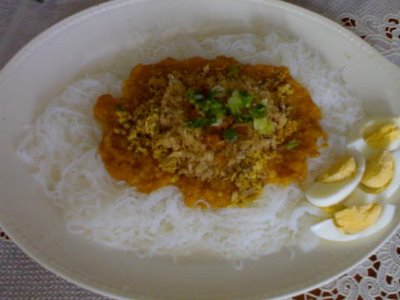 Two big bottles and a small can of aligue (approximately 600 mL), with water added and thickened by cornstarch, made sauce good for about two kilos of bihon, or what is called elsewhere as stick noodles. The left-overs we had for New Year's day brunch.

I also tried using a kind of flat rice noodles that looked like linguini, labeled yang chun noodles, bought at the Asian section of the Market!Market! grocery. As with the pasta with aligue sauce, I wanted to use a thicker kind of noodle as a foil to the richness of the aligue palabok sauce. The resulting pancit was great, and it was well-received. I didn't have any kind of food coloring at the time, and used Razon's aligue solely, so the sauce came out very pale. It belied its taste, though -it very tasty and alive with flavor. 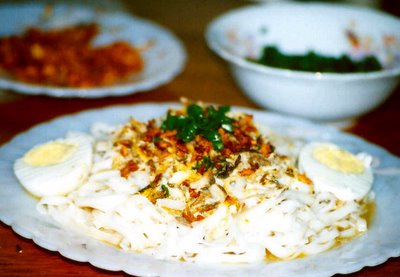 I love pancit palabok too... but my favorite is not from Jolibee, I prefer from red ribbon's.