The Friends Who Are Great Italian Cooks 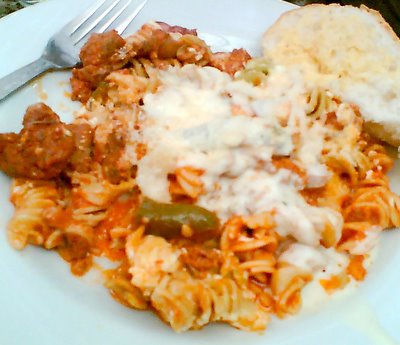 When the agency I work for celebrates its foundation anniversary, the close to two thousand employees are treated to lunch. In the past, boxes upon boxes of a packed lunch, usually from Max's or some other, quasi-fastfood dining outlet near the agency's head office, arrive for distribution after the thanksgiving mass and a short program.

For the last several years, though, this practice has been replaced by a meal subsidy. So employees now have leeway in choosing where to eat the anniversary meal, and in the process also have the choice between lunch and dinner, or maybe even breakfast, as long as the required official receipt of a meal is dated on the anniversary date.
Several days ago, the agency marked its 59th year of existence, with unprecendented performance for the last year. Despite this achievement, the meal subsidy has not increased, and, although I and my colleagues were willing to fork over our own money, it could not even cover a decent main course in an upscale restaurant. Be it so, we were left with the more than happy choice of heading to our favorite Italian cafeteria.

And might I add, a local Italian cafeteria serving the closest authentic Italian fare one could get hereabouts. With the price of a homecooked meal. Of course it's self-service, you have to share tables as it's full-packed most of the time, it's only fan-cooled, and there is no ample parking.
But who cares about ambience and other fine-dining trappings when you can have 12" original Italian pizzas for Php240, authentic Italian pastas at Php130-170, turo-turo (smorgasboard) choices (LARGE plates, good enough for two, even three) all at Php150 with rice, and best of all, two scoops of gelato for a measly Php35? I'll be glad to walk from high-end Greenbelt 4 to Pasong Tamo even on a sweltering noontime, just for one of the above.
Amici di Don Bosco has separate counters for ordering pizza and pasta, with a mouth-watering display counter of numerous gelato flavors in the pizza ordering counter. You snatch separate paper print-outs of pizza and pasta choices and line-up for the counter. Service is fairly fast, with pizza orders the longest at 15 minutes, but the pizza comes to your table oven-fresh, dripping with melted mozzarella and herbs. There are 25 pizza flavors, with the al 4 formaggi (four cheese - mozzarella, taleggio, parmesan, brie) still quite the bestseller. 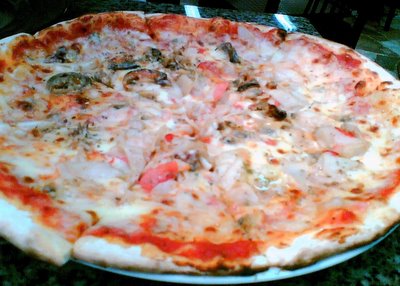 Frutti Di Mare
The cannelloni agli spinaci, baked cannelloni stuffed with spinach and cheese topped with bechamel and parmesan cheese, and the lasagne al forno are both bestsellers, and are always available in the glass showcase in the pasta counter. They are always ordered by my colleagues, with pasta alla pescatora (spaghetti with seafood sauce) coming in a close second. 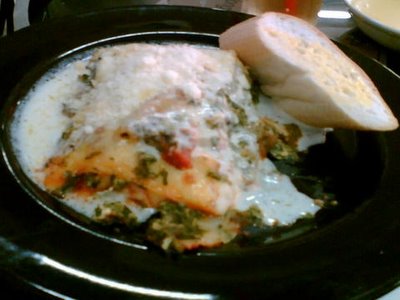 Cannelloni Agli Spinaci
One time a friend and I chanced upon a nearly demolished dish of pasta montanara (spinach fusilli with sausage, bell pepper, cheese sauce, pepperoni and salami) on the counter. It looked so good I had no second thought in ordering it, which thankfully relieved me of my usual endless pondering on which to try this time, which one to reserve for next time. It was the best, nano-second decision I've made in my entire life, to date.
Brimming with juicy Italian sausage in a tomato sauce enhanced by the cheese and roasted bell peppers, full of contrasting textures and complementary flavors, that in a few minutes we were sopping up the left-over sauce on the plate with the accompanying slice of soft bread generously spread with butter. Well, the soft bread may not be authentically Italian, but I didn't mind - I like to have a break from gum-injuring crusty breads with my pasta sometimes. That's French, I believe, anyway.
There are also 25 choices for pasta sauces using various kinds of pasta, plus three kinds of soup - minestrone, tortellini in brodo (stuffed pasta in chicken broth with parmesan), and cream & mushroom soup. There is also a cheese platter (parmesan, pecorino, fontina and local cheeses) and a salami plate (milano, parma, calabrese, bacon, etc.). 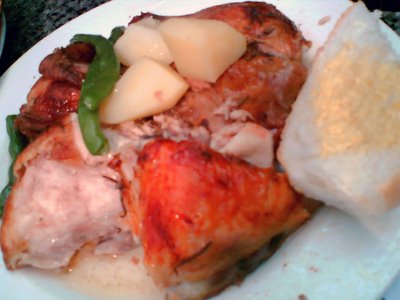 A rosemary-crusted, tender-roasted half-chicken is also always available at the pasta counter, which comes with boiled potatoes and green beans. Flaky-soft and moist, and comes with its own drippings. No other oven-roasted chicken comes close. Even better than our own Filipino lechon manok. 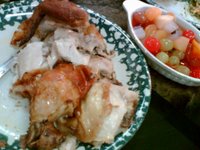 Most of us on our anniversary meal decided to try the smorgasboard. We came back to our table with heaps upon heaps of food, realizing late that at least two should have shared one order.
I got the chicken, which came with rice but with no vegetables, so I got a salad of fruits in syrup to go with it, as I am uncomfortable eating meat by itself. I brought home the left-overs (about 3/4 of the entire serving), and they were even more delicious heated up the next day.
There are many choices in the turo-turo, and the Filipino dishes come first along the line, like adobong pusit, fish steaks, beefsteak, dinuguan, nilaga, sinigang, with international dishes coming last, like hefty crabcakes with steamed vegetables, roast beef, beef stew. I look forward to trying the herb-crusted Italian sausages on my next visit. On the cashier counter are baked potatoes, fresh greens, fruits in syrup and with cream, all for Php50 per supersized serving. 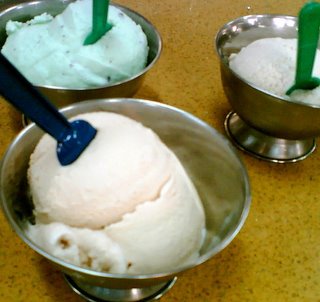 And the gelato? All I can say is, I always leave enough room for the gelato. Because there are numerous flavors to choose from, and I want to try them all. It is always a good thing to eat at Amici in large groups, so you can sample all the others' orders. Of course, you are allowed to order more than one. And with the price, three orders of three flavors is still dirt cheap.
Pistacchio is the bestseller by far, according to the lady manning the gelato counter. The crocantino (rhum and nuts) is spectacular, and so are the vanilla and hazelnut flavors, my two favorites. Strawberry, too, and blueberry, and cherry. . . .Bulk purchase is available, at Php400-500 per 1.6kg container.
Apart from sweets that appear from time to time, like Gianduia bread and chocolate bars (no panettone, though, last Christmas), Amici di Don Bosco also bakes bread for sale, and they produce the cheapest ensaymada (6 pieces at Php50) which is good enough to rival the most expensive chichi-produced ones. Everytime we eat at Amici we always notice skyscrapers of previously ordered ensaymada being picked up. There is a green-hued pistacchio bread that is really nutty and softly fluffy, and a rustic bread and some cream puffs (not in photo) which I have yet to try. 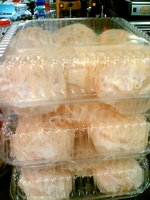 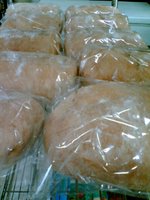 From an ordinary, once-exclusive canteen for Don Bosco and its students serving great Italian fare that, because of great clamor from those who had been privileged enough to sample it, was good enough for a full-scale restaurant, Amici di Don Bosco even operates an Advanced School of Cooking. In fact, a six-hour Italian pasta sauce cooking lesson with Chef Giorgio Bucciarelli is scheduled tomorrow, Jan. 14, 10AM-5PM, while a pizza-making course is scheduled for next Saturday, Jan. 21. Similar courses are intermittently held throughout the year. Cookbooks are also available, published by the printing press next door, Salesiana Publishers, Inc.

Of course, an agency anniversary was just a handy excuse to eat again at Amici. We're looking for another one. Probably when our receipts had been reimbursed. 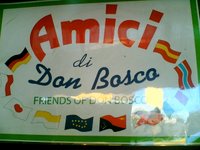 Great post! I've been there, too, and will keep going back for its pasta, pizza, gellato and their regular canteen food. Those with cars can use their limited parking space at the back, with entrance shared with Don Bosco's printing press. From this side, one can watch how pizzas and bread are prepared and baked.

BTW, its also open on Saturdays... I don't know about Sundays though.

Oops, overlooked that, thaks, Franz. It's closed on Sundays, being a restaurant affiliated with Catholic missionaries.

Yes, one may find some parking space at the back, with a bigger probability of success in the evenings. We tried to park at the church patio once, but we felt so guilty not having heard mass first then proceeding to eat at Amici that we just go back there by taxi, or park at chichi Greenbelt, haha.

Amici sells cookbooks, too, by the way. It has become such an enterprise.

Hey Kai! Thanks for bringing me there! Awesome article for an awesome food place! Can't wait to try their tender roasted chicken again, mmmm! A small correction: it's not brandy and nuts but RHUM and nuts that we had. Don't know the Italian name though but what the heck! It's still delicioso gelato, anyway one calls it! Balik tayo!;-)