LP 5: An Uprooted Pinoy Christmas in the Philippines 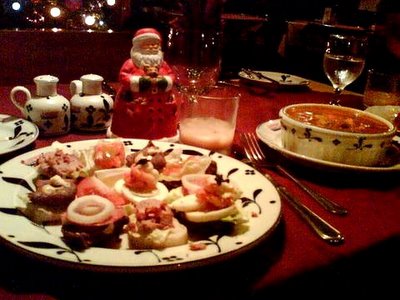 Christmas in the Philippines, as generally practiced in Pangasinan and as I've found out travelling around the country, is strictly a family affair. Religious practices, companions, gift-giving, food prepared and food shared. Everything involves the warmth of home and the mark of family traditions. 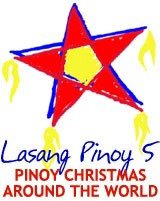 Although September ushers in Christmas decorations and piped in Christmas songs in malls and over the airwaves, the season doesn't really start, liturgically speaking in Roman Catholic terms, until the first Sunday of Advent, which is usually the last Sunday of November after the Feast of Cristo Rey or Christ the King.

Advent is marked in Catholic churches by the purple vestments of eucharistic celebrants, and the lighting of the four advent candles, one after the other, every mass until Christmas day.

Then there is the Feast of the Immaculate Conception on the 8th of December, which is a holy day of obligation to hear mass. But the ball really gets rolling come the 16th, when the 9-day misa de gallo or dawn mass (or as practiced nowadays in Metro Manila, eve mass, held at 9pm of the evening before) starts.

Food associated with Christmas also start appearing early, and there is much consumption of brownies, food for the gods, ensaimadas, et.al., them being favorite gift items of the season. And of course we have the revered bibingka and puto bumbong, or intemtem in Pangasinan, newly-cooked, excellent when eaten hot, to be partaken of after braving the cold dawn air to go to misa de gallo.

In my family, Christmas is on Christmas eve, not on Chirstmas day, which we usually sleep off after much revelry the midnight before. So the most important meal of the season is the misnamed noche buena, which is what we call the meal at midnight of the 24th. I understand this should be properly termed media noche, but I grew up eating noche buena on Christmas eve, and it just doesn't sound right calling it media noche, blame my Kastila-challenged indio ancestors.

The most important liturgical celebration while I was growing up was also the midnight mass on Christmas eve, which starts at 10pm. I still remember my first midnight mass, when I was about four or five, which I was brought to because I was pestering my elders to let me see the "walking star."

It was church tradition then that during the Gloria - with all the church bells tolling and ringing and the choir blowing their heads off - a big, lighted, golden parol suspended on the ceiling at the back of the church (atop the entrance door) will "walk" toward the altar and come to rest right above the "manger."

Then we come home to noche buena. The fare was not constant, but there was always mansanas (apples, expensive and hard to find during those days, available only during the season), bland roasted castañas (chestnuts), fruitcake, salty ham and hard and smelly queso de bola (Edam cheese). We never liked the last three, and they lasted in the ref until the next Christmas, but they always appeared come noche buena. 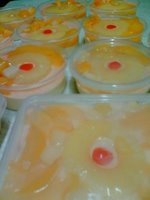 One Christmas eve my mommy made a refrigerated crema de fruta, and since then it became a noche buena staple. Christmas day dinner, the real noche buena in the right sense of the word, was with my paternal grandparents, who served native (free-range) chicken they themselves bred.

When I came to be in charge of Christmas preparations in the family, I did away entirely with the fruitcake, the ham and the queso de bola, and, along with a brother, experimented with a lot of new dishes. We were so involved and we looked forward to it very much that we were discussing menus several months before December. They were successful experimentations generally, and we only ended up with one Christmas eve dinner with disaster on the table and much laughter and mirth in the air.

I found out when I went to Cebu one Christmas, to accompany a friend who had just recently moved there, and this last Christmas eve, that noche buena or media noche is also a strictly family affair for the rest of the country. In Cebu, my first Christmas away from home, we slept after midnight mass because there was no restaurant open or any food stall from which we could buy anything. On Christmas day we toured the entire city looking for a place to eat and not one single food outlet was open.

The past several Christmases were marked by my being married, and the event is spent with the in-laws, who take care of all the food preparation. Last Christmas, though, owing to the hubby's nature of work, we couldn't go home, and made the decision to spend Christmas in the city, with all its commercial splendor.

The nannies had to go. With two small kids, I couldn't prepare a Christmas feast at home. We decided early on to spend Christmas eve - midnight mass and noche buena - in a hotel, but at the last minute the hubby wanted to hear mass in a "real" church. So out we went. On the way to church we spotted the Danish Connection open. I've always wanted to try the restaurant, so we decided to have our early media noche there.

We only had an hour for a meal as the restaurant closed at 10pm. We were just grateful it was still open when we arrived. It was fairly empty, with just two other tables occupied by individual foreigners. My little girl amused the Israeli seated next to us, shrieking delightedly every time she coaxed out a friendly smile. It was a little dark and a little too quiet for a festive Christmas feast, but the great food more than made up for the dreary ambience.

It was one of my best Christmas noche buena repasts to date. We started with glasses of eggnog to accompany the Danish appetizer platter (smǿrgasboard) of roast beef, liver paté and gravlax (marinated Norwegian smoked salmon with dill mustard). Of course we had to have Danish meatballs, and it was just like how my host family in Arhus, Denmark cooked, though without the authentic Danish gravy. We also had a thick and hearty Viking Goulash, full of flavor and very filling. 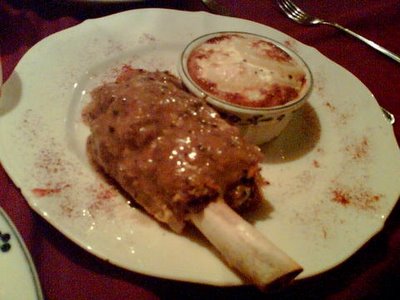 But the main event of the evening was the lamb shank - grilled, braised and baked to tender perfection. Our waitress forgot to serve the mint jelly, but we didn't mind, because it needed nothing else. It was fork-tender, the meat falling easily away from the bone, and the cartilage was reduced to transparent jelly. Melt-in-your-mouth goodness, heightened by rosemary. The way all lamb shanks should be cooked.

Since we were overflowing with dessert and wine gifts, we skipped them at the restaurant. We were full, anyway, and we wanted to savor the lamb shank more with the taste it left on our tongues.

We were prepared to spend much, it was Christmas after all, but we ended up paying a bill just a little above what we would pay for a hotel buffet, for one. Not bad for a Christmas away and out of home. Even with all the commercial trappings.

I couldn't have cooked lamb shank that exceptionally. It was great, really.

Lasang Pinoy 5 is hosted by Mike of Lafang, definitely the best pastime in the world!
Posted by Kai at 6:32 PM

Email ThisBlogThis!Share to TwitterShare to FacebookShare to Pinterest
Labels: from around the world, lasang pinoy, poncia (handaan/party), restaurants

hi kai...wonderful post...i just want to point out though that dec 08 is the feast of the immaculate conception (mary conceived without original sin)...we celebrate the feast of the annunciation (the day the angel announced to mary that she'll bear a child) on march 25 (nine months before december 25)...neat huh...

Thanks, kong wi, I was actually debating about it with a friend because I wasn't sure, and it was not logical that the angel announced the news 17 days before the birth of Jesus Christ.

I never knew there is a feast of the annunciation in March, though. Perhaps it is overlooked because it is generally already within the Lenten season.

kalad, been craving for lamb in mint jelly, mandarin hotel version. I must try the danish connection version sometime.

kai, i think it is that we don't have the same liturgical year celebrations in the philippines as in other countries -- and depends on what your local parish and/or associations do too. here in the US i learned about celebrations that we don't really have there -- and vice-versa. many of us Catholic homeschooling moms honor and celebrate the old traditions -- yes, even the Annunciation at Lent. i'm actually doing research right now for our homeschooling group about the coming months, and an Annunciation recipe(s) will be included in my article.

There's another one - last Sunday was the feast of the Sto. Niño, and the mass celebrant was talking about how the feast is celebrated only in the Philippines, with the related noisy and colorful celebrations of Sinulog, Ati-Atihan, Dinagyang and whatelse following the succeeding Sundays.

Although I think there must have been a feast elsewhere, the Sto. Niño came from the colonizers, after all.