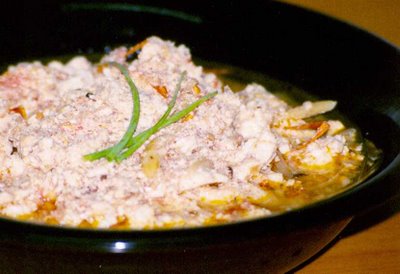 Something for Lent. As a child I was given the roe from bulging fish cooked in sinigang - the traditional Filipino soup of fresh fish in clear sour broth. And it stuck - I've always given premium to fish roe, extending to fat squid thick with doughy filling. And I'm not referring to stuffed squid.
The fish we consumed were small, though, relatively speaking. As big as a palm, with fish roe as thick as a thumb, curling up when cooked. And I was content about that, the sweetish treat crumbling to tiny dots in my mouth.
Until I went to Metro Manila to study, and met many friends from around the country, and travelled to their homes, trying out many regional cuisines. And I found out tuna can be as tall as a man. Roe as long as my arm. And cooked by itself, separate from the mother fish.
Oh, that first taste of grilled yellowfin tuna bihod from Davao! Retaining its shape, like a long fat bratwurst sizzling on coals. Eaten as it is, just with a dipping sauce of soy and vinegar spiced by chopped onions. It was magical for me.
Since then I have always asked fishmongers selling deep-sea meaty fish if they have some bihod. I'm not always lucky, since there are only two roe coils per fish, and these are sold very early in the morning, while I'm still in bed. And then not all tuna are female, and not even all female pregnant all the time. My luck frequency is about once a month, which is just fine so the bihod could retain delicacy status.
I've tried roe sold in Metro Manila wet markets coming from tambakol, yellowfin, bluefin, tanigue. The first one has the most fishy (malansa) taste, while the last one is so creamy it almost tastes like milk, and it has become my favorite. It is the rarest, however, so I settle for tuna eggs whenever it is available. The downside to this, however, is that I have come to view roe from small fish as inferior, and I have lost my taste for them. Small fry, as they say.
To cook, sauté some garlic (I always pound them in a kitchen mortar), adding minced onion when the garlic has turned golden brown. When the onion has become transparent add chopped tomatoes (amount depends on whether you like a lot of tomatoes in your cooking or not entirely at all). Stir and let cook for a while. Slice/chop the bihod thinly, then add to the wilted tomatoes. Stir and cook for about five minutes. Sprinkle ground white pepper and salt to taste. Garnish with chopped spring onion and serve hot, with steamed rice or toast. On pasta, too!
Posted by Kai at 5:14 PM

Wow, am I glad to have found a recipe for bihod!

We love the bihod served at Syfu's on Kamagong but we haven't had it in a-a-a-a-a-ages. We've seen bihod in the supermarket but never knew how to cook it.

It seems that our bihod starvation is about to end ;-)

Good thing for you, C! Thanks for visiting!

Just something you would like to try before the saute. Cook the bihod first in ginger, onions, garlic, vinegar (paksiw), and then saute. Yuuummm!