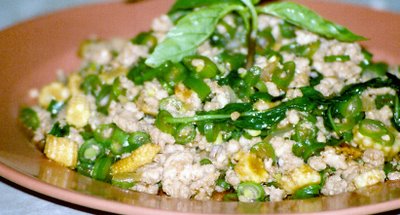 This is my approximation of the "specialty" dish as claimed by Oody's Express, called phad kee mao, which I had one lunchtime at the Market!Market! mall at Fort Bonifacio in Taguig City.
I'm not a fan of the restaurant chain, which started with Oody's Rice & Noodles Bar opening simultaneous with the start of operation of the theme-based mall Glorietta 3 in Makati City. Express outlets has since opened in other "common" malls, called Oody's Express.
The chain supposedly especializes in Asian cuisine, with emphasis on Thai food, but there is nothing noteworthy and genuine about most of the dishes. However, one time I found myself looking for a redeeming value, and in all providence asked the waiter what their best dish was.

And phad kee mao was recommended, so I ordered it, even though pork is not a part of my regular diet. Good thing I made an exception that time, because it was very good, so good that I actually wanted to cook it at home.
Phad kee mao is ground pork sauteéd with thin slices of green beans (Baguio beans), young corn, bell pepper and sweet basil. It was lively to eat it topped on a steaming bowl of rice, with the vegetables providing premium crunch, while the basil and a thin sauce made it aromatic and very flavorful.
I was so excited to try it at home that I never researched the flavors and just tried to approximate it with the sauces I had on hand. Had I tried to learn more about it then, I would have known that in Thailand ground chicken is more commonly used for the dish, which is more favorable for me. And it is topped on noodles, preferably fried.
But I had a fairly decent initial venture, using all the ingredients in the dish I ate at Oody's, and combining a bit of oyster sauce (using the saltier Mama Sita's) and soy sauce for the sauce. All the flavors complemented one another fairly well - the saltiness of the sauce foiled by the sweetness of the vegetables and the basil, which also all provided nice textural contrasts. The oyster sauce and basil together made the dish decadently aromatic.
In short, a pork dish I'm willing to eat over and over again, spooned over hot rice. But of course the next time I'm cooking it I'll use chicken. I haven't cooked it again, though, and may not do so for a long time yet.
Because when I served to my husband the phad kee mao I made he said it smelled and tasted like a pisęng. It was the worst someone could say about food, because pisęng is the Pangasinan term for that tiny, black insect which emits a smell as powerfully foul as a skunk's when crushed. It was only then that I realized that, being a true-blue Filipino, he wasn't used to the flavor of basil. Which is, of course, an acquired taste.
Just in case anybody wants to confirm that there is nothing being missed by not eating at Oody's, here is a list of the whereabouts of its outlets.
Posted by Kai at 7:20 PM

Email ThisBlogThis!Share to TwitterShare to FacebookShare to Pinterest
Labels: from around the world, restaurants, sira (ulam/viand)

Hi Kai, i happen to talk to some of your classmates, and they looked stressed and harrassed with the pace your classes are going. And here you are still finding time to post another article. :)

I'll try to remember this thai dish name and look it up at a more authentic thai resto. Your preparation as shown in the pic looks yummy.

eeh? you dont like oody's? pareho kayo ni sausage. curiously, i like it. had dinner there last night. tried vietnamese noodles and fresh spring rolls. ok naman. as to authenticity, couldn't distinguish. been to bangkok and slurped my way through various spicy noodle soups. all i can say is oody's version is sweeter and without spice which is fine with me because i'm not partial to chilies. parang di bikolano no ;-)

Re Oody's, I agree with you, as in. I think I cook better, and that's not a good thing ;p

Yo, you know that from the first day of class stress has been a constant part of our daily undertakings. This is my way of coping. And taking advantage while I still have access, hehe (SHHHH!). Oh, and try cooking the phad kee mao, I guarantee you'll like it.

Kalad, the easiest indicator of a Thai restaurant's authenticity is the pad thai, and maybe the satays, which are not really spicy even in Thailand. In both, Oody's fails dismally. I'm sure the offered fares at Soms are way better. So there's no reason to try the other dishes, really. Eat rolls at a Vietnamese eatery, you'll be more amply rewarded.

For me Thai Kitchen is value for money, I just wish they had more accessible branches.

KittyLitter, try and try. There's a rainbow after the rain. D ba you can cook decent spaghetti na, hehe!