Do You Remember Choco Mallows? 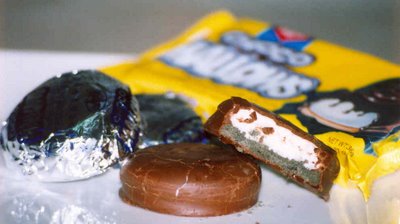 Those thick round chocolate rounds that melt into soft, gooey marshmallow and on to a chocolate cookie base? They were individually wrapped in silver foil and came in sixes in a thin, yellow rectangular box.
In summer the chocolate has all but melted inside the foil, and all you could do was to put the entire thing into your mouth, foil and all, and proceed to chew until you have squeezed out all the melted chocolate. And then dutifully spit out the now crumpled foil.
Or at least that was how I ate it. And forgot about it for a time. Until there were these international food swaps and some of the American sweets going around were called mallowmars, and the sound of the name intrigued me. And somewhat touched a deep, denied yearning inside of me.
Looking at the photos of the mallowmars I exclaimed aha! But they are choco mallows! And that was when I decided to drop by the local biscuits shelf of my favorite grocery store and found out that, yes! choco mallows are still produced! And still encased individually in foil, sporting the same yellow design, still in packs of six, although now they're in a foil pack and not in a cellophaned box. Probably to look more upbeat, in keeping with the times. Too bad for the environment, though.
I touched base with my inner child. They still tasted the same. Cloyingly sweet and gooeyly sticky that I feared for my teeth. But they did not complain. Such joy to taste them once again, probably. I could finish the whole pack now all by myself. Maybe I could have done it, too, as a child, had it not been for my parents.
It is a wonder to think how this has survived the times, and continue to be in existence. If that's any indication of its popularity. I find it strange, however, that it has never been imitated, and up to now it has no direct competitor.
There is a Cream-O version of a chocolate coated chocolate cookie, but no marshmallow in between. My minimal marketing strategy training is baffled how Choco Mallows could undertake minute changes over the years and still keep its own shelf space, and yet not one single clone has emerged.
Of course, I'm thankful that it has not evolved into something else, when the accepted order of the day is to be always reinventing yourself. There is such comfort in that - to steadfastly remain true to your one and only self. Like an anchor, something to hold on to and touch base with when the adult world proves a bit taxing.
But many people know that there is a thriving little black market for Choco Mallows, along with other cookies of the bygone, gentler years (remember Butter Crunch? Hi-Ro?). They come in unmarked cellophane packs, sold by ambulant vendors and enterprising individuals around the metropolis. These can be found even in Divisoria.
I think the vendors source their stuff from the numerous stalls along the road beside the biscuit factory somewhere in Laguna. Rumor has it that the biscuits sold in these stalls come from the factory, thrown out because they did not pass quality control.
If that were true, the factory must be losing so much from product rejects that I wonder why they are still in business. Judging from the number of stalls and the amount of supposed throw-aways they are carrying, the rejects must be selling more than the "official" ones carried in supermarkets and grocery stores.
I find no difference between these and the quality-controlled ones, anyway. It's just that the renegade Choco Mallows are naked, and can be bought in packs of a dozen pieces. That's more than enough for my sweet tooth. Though the tooth seems to relish the taste of aluminum foil.
Posted by Kai at 8:06 PM

hi kai!
i'm back and never had the chance to go up to manaoag! grabeh..sayang..
anyway, one of my childhood faves..choco mallows! until now i like it..good thing i can buy from the fil-store here whenever...

Bert, Choc-nut is a symbol of independence for me ;-)

Hi, Ces! Welcome back to blogging. I was asking Mike about your trip, hectic daw. Next time!

Yup I remember choco mallows. My siblings and I used to put it in the freezer for a few hours before eating it! Yum!

I never really craved for choco mallows when we were still living in the philippines. Its funny when one is away too long from their native land, every little thing from home is an opportunity to reminisce it and savor the wonderful memories we have then.