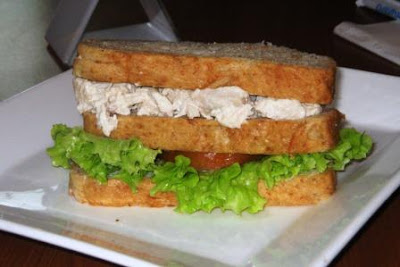 [Delifrance's Chicken Club Sandwich, half Php89)]
If you knew it was going to be your last supper, where would you eat?

I experienced a "last supper" of sorts. Unfortunately, I didn't know it was going to happen, and my last supper was unplanned.

The day started innocently enough. As it was wont to do, the last two times. I had gone to the hospital for a scheduled late-term pre-natal check-up, but the doctors told me I was already 4cms dilated. I was surprised - it was already my third, so I expected I'd be properly warned, or at least I'd know the signs.

As it was, I only had a shoulder bag with me - I had expected to go to the office that day. I had already assembled my hospital bag, but I left it at home, 36 kilometers away from the hospital.

I was told to call for a bantay and for somebody to bring my bag, and that I'd be given two hours to walk to see if the labor progressed (I had not been experiencing any, but looking back now I think the ride from Cavite to Quezon City somehow masked any contractions I was having).

As it was already nearing noontime I asked if I could eat lunch. Good thing the reply was positive, but light lang.

I first walked the three blocks to the nearest automated teller machine (ATM) to withdraw money, since the one inside the hospital complex was defective. The two ATMs I went to replied that I had already reached the maximum limit for withdrawal for the day, even though I had not done any.

I called my bank to report this, and while they were evaluating what happened I decided to encash my checks at my bank's nearest branch, which was in a nearby government hospital.

Upon finishing my bank transaction, I saw a billboard announcing the opening of a Delifrance branch inside the hospital. I thought Delifrance was good enough for a somewhat "celebratory," if not "anticipatory," lunch, since all that I passed on my way to the bank were all fastfood outlets.

[Four Seasons, regular Php58]
I first ordered just half a chicken sandwich - I obey physicians' instructions religiously - and a four seasons. They were good enough, and the outlet was nice - all glass walls that let the bright sunshine in from the courtyard.

But I thought I needed enough energy for the labor and delivery later on, if I was really going to give birth that day, so I added an order of shrimp pesto pasta, the only kind that appealed to me that day. 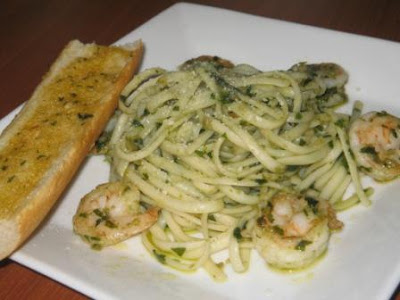 [Shrimp Pesto, Php182]
The pasta was a tad too salty for my taste, and the pesto was too dark - I prefer a lighter green (I'm talking about tastes, not color, and this is the best way that I can describe it). But it satisfied - it was very filling, the shrimps fresh and succulent, cooked perfectly.

Now I know it was serendipitous that I ordered anything at all. 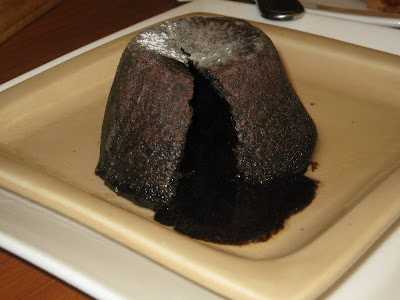 [Flaming Choco Lava Cake, Php75]
Posters of this dessert were all over the place, and I couldn't resist. It is served flambeed, so that molten chocolate can ooze out of the cake's core upon breaking it. But fearing an "accident" during delivery, I controlled myself and ordered it to go, along with some more pastries. For refreshments after delivery. 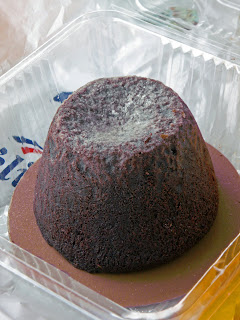 Well, when I got back to the hospital the baby had turned and was in breech position, and I was already 8cms dilated. In no time at all I was ushered to the operating room, for my first delivery via caesarian section.

Twelve hours later I was told I could take in water. Clear liquids after another six hours. Six hours more I was allowed crackers.

Maybe this is routine for many people, but I was totally clueless. Prior to this I had only been inside a hospital to give birth, NSD (normal spontaneous delivery), and only, only, overnight (or 24 hours, at most).

This time, I only had the chance to see my daughter 24 hours after giving birth. When it was allowed I wasted no time, and initiated breastfeeding at the nursery. So when I got back to my room I was feeling the emptiness of my stomach (how long can pasta last?).

I gobbled up two foil packs of Fita crackers, and feeling really, really thirsty, I drank up the canned pineapple juice, at room temperature, that my husband bought, which I had avoided for half a day.

Within fifteen minutes my stomach had ballooned up that I looked pregnant again, and I was belching like a ten-wheeler. The ob-gynes were frantic, and I was brought to and fro for various tests and referred to surgery.

It was decided I needed NGT - I don't know what this means, I asked but in my panic I blocked it out of my mind - I just remember that it is a tube that is inserted through the nose into the esophagus all the way to the stomach to relieve pressure.

I promised to high heavens I was okay, that I was belching out all the gas, that I would never eat again for my entire life if it came to it.

The doctors let up for six hours. My inflated stomach thankfully went back to normal. But every time anybody entered the room I was asked if I had already passed wind.

Everybody asked - all the midwives, the nurses, the interns, the residents, the specialists, morning and night shifts, I think even the orderlies who brought my meals that ended up being eaten by the hubby. I think it got to a point that I started volunteering the information, even to my visitors.

I was also denied any food and drink for the next three days.

It wasn't really so bad. I had an IV all through out (it was transferred every single day, from left hand to right and back to left again, but I never complained, anything but the NGT!) so I was properly hydrated, and was given regular medication to treat my stomach acids.

But I was delirious from being denied food orally for the longest time in my life. I dreamed about food. In the daytime I planned what to have delivered to the hospital, what to cook at home, when the ordeal was over.

Friends symphatized by saying I should just take it in the spirit of sacrifice for the Lenten season. 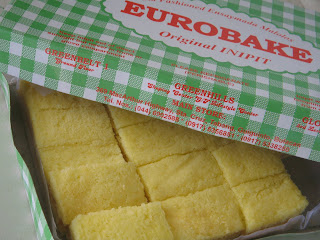 And visitors, well-meaning friends, brought some of my favorite pastries, which just served to heighten my delirium. The nurses were so happy to have them.

And the choco lava cake?

My husband ate half of it the first day, leaving the half for when I could eat. But when my fasting extended to three days he ate the remainder. In front of me.

When I was allowed oral intake of food again, gradually, along with the instructions always came the warning, pa-konti-konti lang. I held on to my recollection of the taste and smell of that last meal at Delifrance.

I loved Delifrance for their pastries, but now it ranks among my best-loved restaurants.

There's nothing like the memory of your last meal for days to make it so endearing.

and what happened to the cinnamon rolls i gave you? don't tell me sir francis gobbled it all up again, wehehe. Congrats again kai.

p.s. my past experiences with deli france, unlike yours, were uneventful(what with the pricey pastas in small portions), but your story (and that yummy pic of the pasta with shrimps) might just convince me to give jollibee's sis another chance...)--ed

Ooof! Hope you're feeling better!
But congratulations-- and it's good to have you back!

Congrats and I hope you fully recover soon!

Hi, Ed, did you think I was going to let go of those rolls? They're comfort food, and good thing you decided to visit at the last minute, as I told you I could eat by then!

Hi, Tanya, Jane, Ut-man, thanks and I'm eating now, as much as I want, hehe (I've got a good and valid reason - I'm breastfeeding, hehe).

congratulations on your new baby. what a funny story, something to share with your kids when they're all grown up. :) It's true that the memory of a last meal before true hunger sets in, lingers, no matter how good or bad it was, and you'll have yummy memories of that meal forever hehe.

Yes, ragamuffin girl, as what ed said - I never really gave Delifrance a second thought, except on Christmas for their fruit tart. But now I can't get enough of that choco lava cake, even though it's not so fantastic, hahaha!