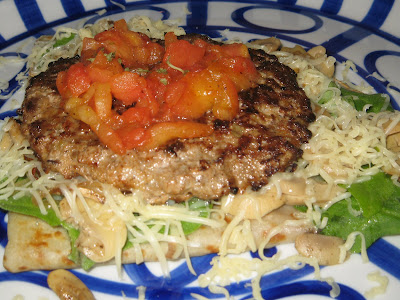 [Cafe Breton's Hamburcrepe, Php199.55*]
Or at least, that was how I felt when, a month before his sixth birthday, my eldest and only son announced that he would just like to spend his birthday at the Mall of Asia.

I felt cresfallen for two reasons. First, the last family event I had organized was in May, and from that time on I had been preparing for this birthday party. It would have been a no-holds barred one, as it would have been the first time he'd be having real friends as guests, with a real themed-party celebration.

He had requested a swimming party, and I had been happy to oblige. The community pool was a stone's throw away from where we lived, he had taken a swimming course the summer before, and the food choices interesting and spelled f-u-n.

Also, I would have wanted to indulge him, as he never had a real kiddie party. Where we used to live there were no kids around for him to cultivate friendships with. We'd invite kids of friends and acquaintances, but I didn't think it had been fun having kid guests whom you got to meet for the first time on your birthday party.

But we now live in a community abuzz with kids his age, and boys abound with whom he biked, flew kites, ran around, talked (yes, I was surprised they talked at this age), bragged, shared toys, and did every other little boy thing. It would have been great to have these kids singing to him as he blew his birthday candles.

So I had planned, and conceptualized, and visited every other store and mall and bazaar looking for appropriate decor, platters, give-aways, souvenirs. For months I had scouted recipe books, blogs and my store of food memories to work around a menu, trying recipes that looked promising every weekend. I had even arrived at the point where I structured the prep work and actual cooking, and planning how everything should be scheduled on that day.

But on the day I came back home from making the reservation at the pool, what child experts foretold happened to my son. He got the big S word I grappled with for many long years, in my childhood and on to my teens. Shyness.

Good thing I haven't bought anything yet, having scheduled the shopping two weekends before the party, when the husband could drive me around. The nanny said I should breathe a sigh of relief - the cancellation meant money saved and less stress for all of us. Which was really for the best, because a school activity in which my daughter was involved in turned out to be so involving and time-consuming, and got scheduled in the week of the birthday, to boot. So that's where I turned my attention to, instead.

In retrospect I can now say I'm glad the party was cancelled. Because that fateful week we had the school activity plus two formal parties to attend where the kids had parts to play. The only actual preparation I did for my son's birthday was to locate a strawberry cake, upon request. Had it been more I would not have lasted the week.

The second reason I was not about to agree to my son's spending his birthday at a mall was the consumerism involved. I discourage birthday parties held in fastfood outlets, but let the kids attend those of their peers. A mall is one whole complex of brands and temples to empty calories. And the Mall of Asia, or MOA, is among the top five largest malls in the world.

But then the IMAX documentary about dinosaurs was showing at the IMAX Theater at MOA, and I broached the idea of watching it, because he's a dinosaur freak (with me feeding the addiction with books and movies and DVDs I intermittently buy him). He got excited, and it became the main point of his MOA trip. 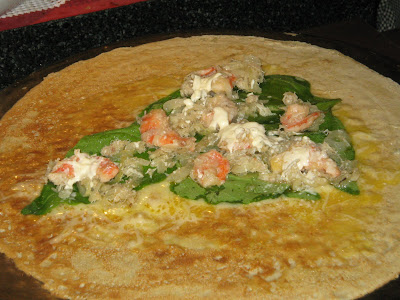 [Cafe Breton's Galettes Bretonne, Php227.23*]
He had to attend his classes in the morning (could I be absent? It's my birthday!) after blowing the candles on his strawberry birthday cake. He then took the first afternoon ferry trip to cross Manila Bay to the Mall of Asia. It would have been nice to have him make the crossing on his own - a real, big boy thing. I would just have had the nanny take him to the terminal, entrust him to the ferry crew, then I'd fetch him as he docked by the mall. But his daddy put his foot down, and my friend scared me witless with tales of possible kidnapping and organ thieving.

So the nanny came with him to the mall, and I sent her back on the next immediate trip home.

The ferry did not arrive in time for the first showing of the dinosaur feature, while the next one was scheduled four hours later. But the boy was so keyed up he wanted to proceed to the theater right away. I told him we had time to do other things, but he wanted to stay there, fearing we'd be late for the next one. Good thing there's a Cafe Breton in the area, so I was able to pull him away from the LCD screens offering trailers of various dinosaur features (just monitor your watch Mom!).

Got him a crepe with a burger patty and all the works - spinach, sauteed tomatoes, cheese, mushroom slices (sarrraaap!), downed with apple juice (Php66.96*). Still kiddie fastfood stuff, glamorized a little and a bit gourmet. Mine was a Galettes Bretonne, filled with gouda, spinach, shrimps, crabmeat, onions and cream. Terrific. 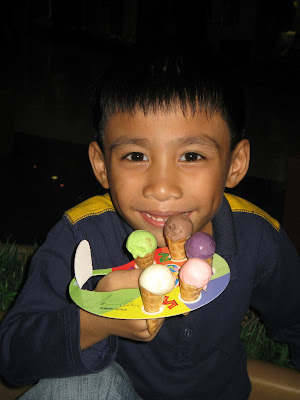 Then we had a palette of Thumbs Up, those tiny ice cream cones that come in five flavors you can mix and match (Php26), which he remembers well and loves.

The IMAX feature, Dinosaurs: Giants of Patagonia, is a documentary, not really for kids, but it was interesting enough for preschoolers with all the recreated digital giants. He understood a bit of it because of all his readings (actually more of a questionings), though of course not as deeply as the feature would have wanted (there are recently discovered huge dinosaurs that have surpassed the biggest leaf-eating and predator ones, eat-your-heart-out-TRex!).

I had the time of my life screaming my head off during the trailers, though. There was a teaser for the next new feature, Sea Monsters, from the National Geographic, which had sea giants (not considered dinosaurs) reaching out of the screen and biting your entire torso.

With headiness I blurted out wasn't that fun? My son replied fun? That was scary! It was, and I want to see the full feature. With my friends. It should be a great, fun-filled evening.

After the movie the birthday boy said we should just go home (he was itching to tell his sister about his day), but we had to have dinner as it was already late evening. He said he'd be content with McDonald's (because of the toy that comes with the kid's meals). I said we should look at other restaurants. He spotted Max's and said he'd like to try it.

Was I so proud. This is the same boy who refused to follow us inside a restaurant one Christmas day, insisting he'd only eat in Jollibee. Well, Max's is still a fried chicken house, but at least it's some sort of a restaurant. 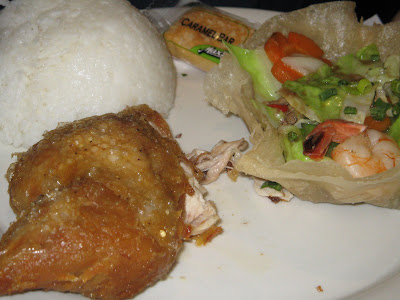 I ordered for him Max's Chopsuey Meal (Php186, a quarter fried chicken, a cup of sauteed mixed vegetables, rice, iced tea and a piece of butterscotch) because it is the only one with vegetables. He said it was good, and the vegetables were nice. Got the Bangus Meal for myself, but it was quite forgettable. 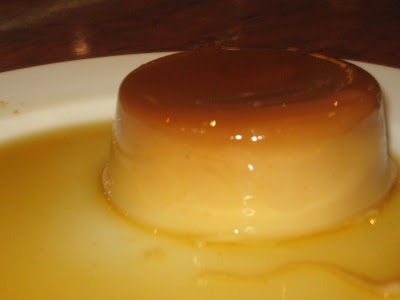 Had a leche flan (Php49), his favorite dessert, but at Max's it was underbaked, and he gave up on it after just a couple of spoonfuls. I just promised him we'd make a better one at home.

Towards the end of our dinner he looked up at me and said Cheers, Mommy!, and clinked his glass of iced tea with mine.

I would not have spent that day any other way.

Leche flan is my favorite desert of all time! Roz