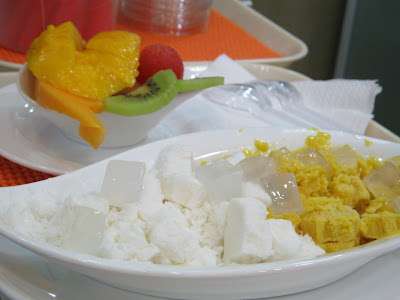 mango and coconut milk sorbet topped with nata de coco, served with a bowl of fruit

Update: This restaurant is now closed.

There is a popular and all-over-the-place fruit dessert haven in HongKong called Hui Lau Shan, with emphasis on mangoes. I think the Xu Liu Xian Healthy Dessert outlet that recently opened at the Mall of Asia is a franchise of the HongKong chain. The desserts are certainly similar, including the bestsellers. The difference in spelling is probably due to dialectical nuances, or maybe along the lines of Hap Chan (a dimsum chain with no two names alike – Haf Chan, Hap Tian, Hae Chan, and on and on).

I am at the Mall of Asia almost every evening, by necessity not by choice, and it behooves me that the dining choices there are aseptic. There are exceptions, of course, but it gets really uninteresting to be eating at only a few places regularly.

So the opening of new dining outlets is at least a breath of fresh air. I really didn’t catch Xu’s opening, but thanks to Alvin who graciously emailed me, I found a nice diversion.

The attraction of Xu, for me as well as for many other people (in HongKong, mostly), is the mangoes. Xu serves mainly fresh fruits hipped up with sorbet, gelatin-based pudding, sago, nata de coco, gata, and fruit shakes. But mangoes are a permanent fixture of most dessert dishes, and are big in the shakes. I am a certified mango addict, and I will staunchly support anything that promotes the fruit.

Before Xu, mall-goers got their fruits from kiosks offering fruit blends blitzed into shakes. I generally stay away from these, as they use a lot of sugar syrup, and mainly employ frozen mush of fruit.

I never eat frozen fruit – my fruit philosophy is to eat fruit fresh right after peeling it. Any leftover peeled fresh fruit goes into a shake that is consumed immediately. I store unpeeled fruit up to only a week, and always in the chiller, never in the freezer. This way, I and my family get the maximum benefits that the fruit is naturally endowed with.

From my visit at Xu, I saw that all fruits on the prep bench were fresh. I got particularly excited by the heaps of fresh mango peelings stacked on one side. And the best thing is, after a cursory inspection of the menu, Xu uses fruits available (by which I mean can be grown and harvested) locally. No blueberries, not even apples or peaches. Just balls of watermelon, cantaloupe (or melon in the local tongue), slices of that sunshiny mango.

I was worried about the mangoes, though. I had to ask where the outlet would be sourcing mangoes when it’s not in season. I was told that there is a supplier which assured Xu year-round supply of mangoes. Okay.

It is so Asian, but it could be so Filipino, too. Surprisingly, coconut milk is liberally employed in the fruit desserts. There’s coconut milk sorbet as topping or dip, or a layer of coconut milk on the mango shake, and a dollop of coconut milk cradled on the hollow of half a papaya. We’ve been so used to the Western way of pairing fruits with cream, or milk (even evap!), that we forget that tropical fruits go best with tropical milk – gata.

I have an issue with the coconut milk at Xu, though. I asked if they used canned coconut milk – I certainly didn’t see any leftover coconut meat, and I was also concerned about imbibing fresh gata (as opposed to cooked). It turns out Xu uses processed coconut milk from overseas, probably Thailand or Vietnam. Though even if it was sourced from the Philippines I still will not be a fan of it. 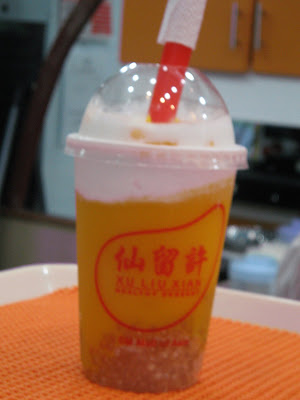 the bestseller - mango shake with sago and coconut milk

I use a lot of coconut milk in home cooking, mainly in rice-based desserts, that I can detect a droplet of it in any dish with my eyes closed. The coconut milk used at Xu doesn’t taste like the real thing. I was told that the mango-coconut shake with sago is the outlet’s bestseller because mango pairs best with gata.

But I wasn’t impressed with the shake – in all fairness it tasted like no sugar syrup was mixed in, the shake relying on the natural sweetness of the mangoes, but the coconut milk tasted like it didn’t come from any coconut.

Still, I like Xu for promoting fresh fruits as healthy desserts. You could actually sit down and eat garnished fresh fruits to while the time, or to fill in between meals, or before a movie, or, like me, before going home for dinner. Or even after dinner. When it used to be cheesecakes and coffee, I'll tell my friends let's have some fruits over at MOA. Just how cool could that get?