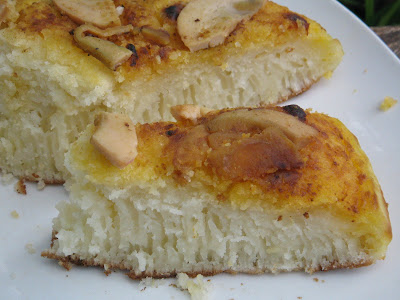 The label "special" is really meant in Neng’s Special Bibingka. It’s big enough to be a cake, the moist crumb eggy and buttery with a refined sweetness, the itlog na maalat not bitingly salty but brings just the right contrast, is outstandingly fluffy yet dense not airy. And it is available only during the Christmas season and thereabouts.

Despite living in Cavite for a number of years now, I’ve only had Neng’s twice. I got introduced to it when I visited a friend’s house in Kawit, a stone’s throw away from Neng’s kiosk, about ten years ago. It made such an impression - it was that incredible - that I never forgot about it.

Sad to say I never got the chance to have it again. We moved to Cavite about four years ago, and always around the holidays we were always in a hurry passing by the kiosk to wait for the cooking bibingka (it takes about twenty minutes for one to be ready), or it was late and Neng has already closed for the day. 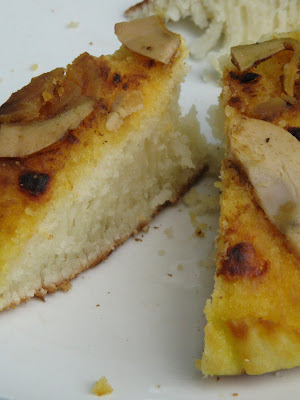 She doesn't cook bibingka all day, anyway, opening around the afternoons and cooking til early evening only.

This holiday season was no less harried for all of us, but traffic was light on the day we went to the circus, we had more than enough time, and when we passed by Neng's there was a bibingka that was almost ready.

A member of the family was also celebrating a birthday, so I reasoned to the husband we could have the bibingka as a sort of native birthday cake. And so we waited by the roadside. And after a decade I got my special bibingka again. 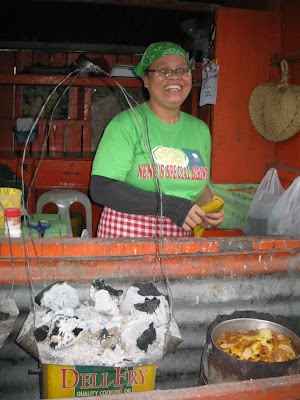 With a photo of Neng besides, before she lifted our bibingka from the makeshift oven. She said she's already famous with all sorts of buyers and travelers asking for her photo.

And while we waited for the bibingka to cool down a bit before being packed, Neng poured galapong batter into the emptied clay pan. My camera went out of focus, but the cubes and cubes of margarine floating in the batter shows through the blurred photo. 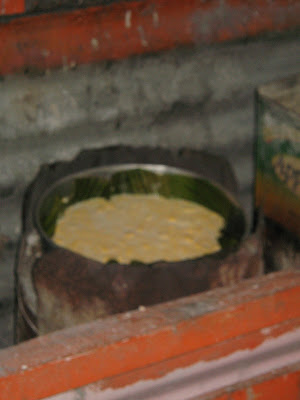 The margarine melts while cooking, imbuing the bibingka with a golden surface and flavoring the crumb with a richness you can't find in any other. 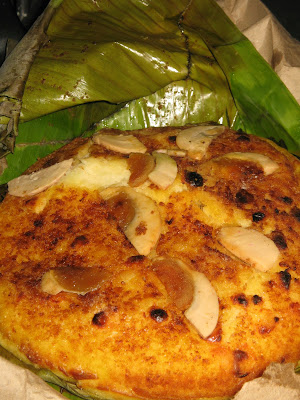 From Php120 about nine years ago for a 9" bibingka that's about two inches thick, Neng has disregarded inflation rates by selling the same delicious bibingka nowadays for only Php160, or an increase of roughly 33%. Incredible. And by the looks of it, she's just happy baking. 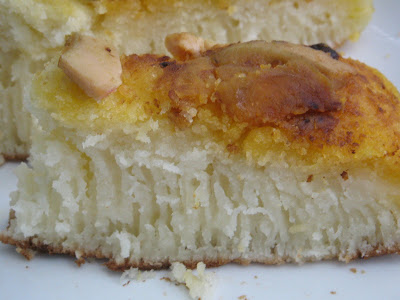 I'll remain in blissfull anticipation until the next holiday season. Nothing but special for a special season.

from Manila, on the left side of the road, just before turning right on the detour around the Aguinaldo Shrine

I miss bibingka! Would love to try Neng;s Special Bibingka someday (if I happen to be in Manila at Christmastime). Thanks for the post!

Kai,
That is the texture of what bibingka I grew up with is all about, forget about the add-ons, the texture is what makes it unique, not the crumbly, grainy, cake-like stuff others try to pass on. My only regret is how it is done. Recipe? I guess a trade secret. Best regards.

Thanks for the compliment. By the way im not in Marulas anymore i bake at my residence in Gahak now just a few meters away