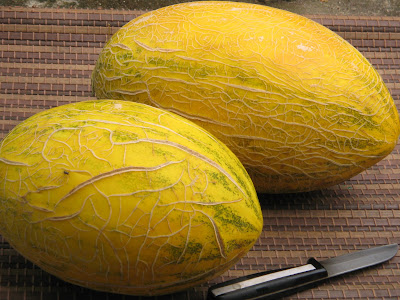 I have only discovered this melon very recently, though the vendor at the Cavite City public market says she's been selling the fruit for quite a while now, year-round. A website about China states that this variety has been in cultivation since the 13th century, in Hami, precisely, which is in Xinjiang.

The Cavite City vendor has the lowest price, at Php90 per kilo, while the Seaside Market and supermarkets around Metro Manila tag them for as high as Php145/kg. But the total price goes up, because the fruit is huge - the smallest won't go less than two kilos.

Like other melons, it has raised, vein-like white streaks around the skin, though they come in waves and un-netted. It is not spherical, but elongated, elliptical like a football, with rounded ends. And unlike cantaloupes, with their pastel pink-orange hue, the rind of Hami melons ripen to a bright, deep yellow. 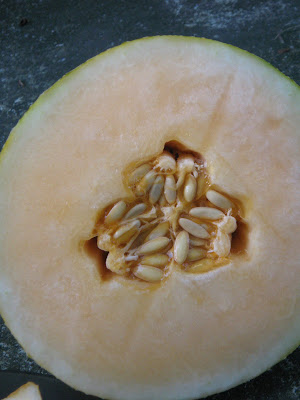 The flesh is cantaloupe-colored, like the common melon, and tastes like so. But the huge, huge, life-altering difference is the sweetness. Common melons cannot aspire to even come close. When I first tasted it - served on a bowl peeled and sliced, I thought the cubes had been steeped beforehand in some sugar syrup.

I had to buy the fruit to make myself believe they are naturally sweet. And they really are. Sometimes I get sore throat with the sweetness, but my kids beg me to keep buying it. They have bowls and bowls of it cold, and my youngest daughter brings cut-up slices to school for baon, proudly declaring afterwards that she had finished all of it. 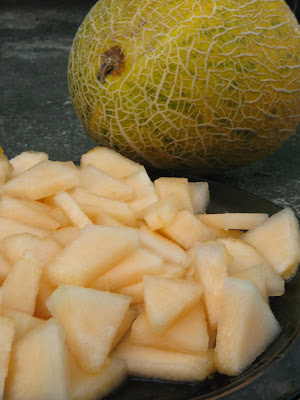 Hami is also a summer fruit, and since summer in the higher latitudes follows our own summer nearer the equator, it means we'll have two seasons of melons every year. Half the year! But I'm afraid by the time of our own summer next year I won't be very happy. I'll be eating cantaloupes and finding them wanting, and I'll be anticipating the coming of the Hamis.

I'm buying what I can, this season. I'm expecting I'll find them cheaper at Binondo and Divisoria, which is now the more weighty reason for going to Chinatown today instead of the mooncakes. They keep well at the kitchen counter, and crawlies can't seem to bite through the skin. Despite the inner sweetness, Hami melons don't smell like the common ones even when ripe. So it's hard to tell when they're ready to eat - we just wait until they're yellow all over.

I hope I'm not tempting my diabetic genes. But life is short, and it's a waste to spend it worrying.
Posted by Kai at 11:05 AM

Email ThisBlogThis!Share to TwitterShare to FacebookShare to Pinterest
Labels: food finds, from around the world, malamis (matamis/sweet), prutas (fruits)

hmmm, i have to see if those are available here in north america.

I hope they are!

I find your posts very interesting, I can get to try some recipes i can easily get and enjoy more pinoy foods :)

the sign said 'hami melons' at 99ranch last week, so i promptly got a small 4 pounder at $0.69/lb. it was elongated but did not have the bright yellow colored rind shown in your picture. also, it was sweet, although not much more than regular cantaloupes. not sure where these were grown, i'll have to check next time. still i'm glad something similar is available here.

Was it green, Lou? We have the green ones here, too, which don't turn yellow as they ripen. They're not as sweet.

i think it was more orange just like the regular round cantaloupes with the green striations. the store did not have them anymore yesterday.