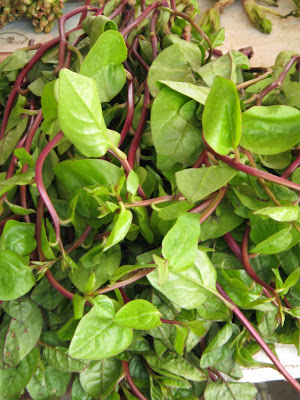 When the family moved to Cavite I felt I was in abject deprivation. This was in view of the vegetable selection in the area. I was as far as I could be from my hometown for all it seemed. The kamote leaves being sold were red, the string beans were unbelievably long, pale and so wrinkled they looked ancient. And of course there was no baeg, no sitaw shoots, no heirloom tomatoes, no black beans!, and it was mission impossible to find a decent drop of bagoong. 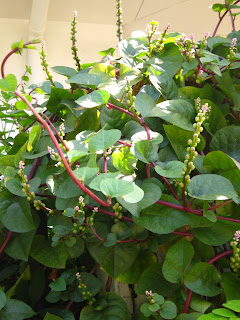 But as I adjusted and got to know the public market better I began to feel a sense of adventure. I was in Tagalog country, and it was an opportunity to explore. So with this attitude I began to see the distinctions of a Tagalog market. Where there were empty spaces where I felt should have been my Pangasinan staples, there were other corners presenting new ingredients I haven’t cooked with before. And spread before me were an array of plant parts that I certainly haven’t eaten before. 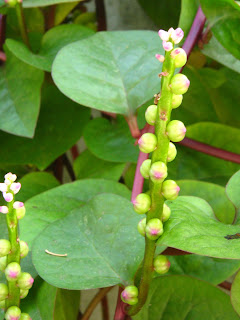 One of these were the ruby-stemmed and succulent-leaved alugbati  vine tops being sold alongside rogue kamote, kangkong  and saluyot. It was funny because when I asked the vendor how the tops were cooked she said she didn’t have an idea, but that they get bought by the end of the day so they must be edible.

I learned from a DOST-FNRI seminar that these leaves come from one of the five endemic organic plants that are packed with nutrients.* Of the five I grew up eating only one, so I resolved to swiftly remedy my parents’ neglect. I don’t blame them, though, since most of the other four weren't really regarded as food in my province, and our diet featured prominently other much more nutritional leaves (hello, malunggay and saluyot). 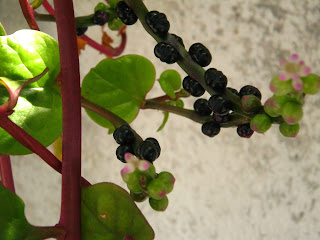 The first time I ate alugbati (libato, malabar spinach, Basella rubra) was in a kind of pinakbet – okra, eggplants, tomatoes and alugbati boiled in salted broth – served at our office canteen, so I wrongfully concluded alugbati was an Ilocano vegetable I didn’t know about.  So that was how I first tried to cook it at home. Even without the DOST seminar I couldn’t overlook it during my weekly marketing, for they are ever present no matter what the season was. 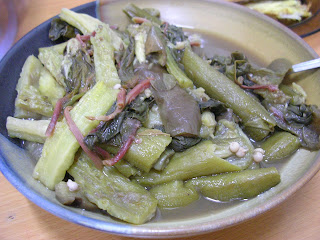 But it did not become a favorite. The flavor isn’t pleasant – very earthy, pervading the entire dish. The alugbati turns mucilaginous when cooked, though not as evidently phlegmy as saluyot or okra. It also loses its magenta hue, becoming nondescript brown like most Ilocano veggies.

One rainy weekend there was a dearth of vegetables at the market, but there were bunches of ever attractive alugbati. The vendor told to me to buy some to cook with albacora (tuna albacore), which were plentiful that time. Ever eager to try new dishes and bearing in mind that DOST touts them as a superleaf I followed her instructions, with happy results. 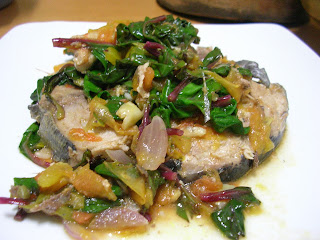 Albacore steaks are seared both sides in a pan. Then sauté garlic, lots of onions and a heaping  handful of sliced ripe and juicy tomatoes. Then mix in the alugbati tops that have been trimmed of the tough lower stems. Let cook until wilted, season with salt and pepper, then add the albacore steaks. Cover and let cook for 2-3 minutes or until the sautéing juices have been absorbed by the steaks.

It is a delightful confluence that albacore tuna and alugbati are both accessible at the Cavite public market. My weekly meal repertoire became enriched, in variety, flavor and nutritional benefits. For this dish I love to cook again and again. The sweetish acidity of the tomatoes downplays the earthiness of the alugbati, which in turn tames the tomatoes’ sourness. The addition of the high-protein, low-fat tuna packs it all in and transforms it into a rounded, one-pot meal.

But the story of my discovery doesn’t end here.  One Saturday a lola sat beside my son at the waiting area of the public market while I finished marketing. When I came to collect my son and the fruits of our labors that day, the lola asked me if I was a Bisaya. I was confounded, for it was my first time to be asked that question. She proceeded to explain that she noticed the alugbati leaves protruding from our bayong, and thought that we were Bisaya like herself. She went on to say that alugbati is planted everywhere in the Visayas, and they frequently eat it mixed with stewed monggo (with gata), or sautéed with ground pork and tomatoes.

My alugbati menu suddenly lengthened, and that fateful weekend I planted in my little garden patch the stems of the two bunches of alugbati that we had bought at the market. I went to Facebook, and friends in the Visayas and Mindanao confirmed that the vegetable is common enough where they live.

So now I know that that first alugbati dish I ate was a kind of Bisayan utan. We tried it again just last night, with alugbati tops from my garden, but this time we had the vegetables sautéed with home-made bagoong alamang and left out the ampalaya since we ran out of it. It was as good as it could be. Like pakbet, but the alugbati flavor took the place of the bitterness of the ampalaya, so it wasn’t as sharp. It was so good I had to set aside some to bring to the office for lunch the next day.

I again took to Facebook, and my Pangasinense friends retorted that they knew alugbati as, along with kangkong, good fodder for pigs. Lucky pigs, to be so nourished. I hope the nutritional benefits get translated into enriched meat, so I won’t have to pity my friends.

*Alugbati purportedly contains phytochemicals and anti-oxidants, and is rich in Vitamins A, B, and C, iron, carotene and nitrates, and a good source of soluble fiber.  It is used to treat headaches, inflammations, acne, and burns and scalds, and used for catarrhal infections, hemorrhagic diseases. It is said to be a galactagogue, as well as used for fertility and other sexual issues.

lol! what a funny post. the ending is especially hilarious.

I am from Iloilo and alugbati is a very common vegetable there. Do not overcook, or it turns brown like other vegetables.
In my household, the usual way is to add it to ginisang monggo, similar to ampalaya tops or malunggay, or himbabao.
The other method is to sautee ground pork or beef in tomatoes, garlic, and onions, add the alugbati and maybe a little bit of water if you like the soupy type of tinola.
You can also combine this with shrimp and sitaw, sigarillas, or even patola.
Do not add a lot of water, especially if you have alugbati and patola.

Lou, I'm sure your relations in the province feed the leaves to pigs too. My in laws use them as ornamental plants in their front garden.

fyi, alugbati will be your fave if you add it in ginisang monggo

It's already my fave sauteed with bagoong alamang in pakbet, but yes I'll have it monggo, thanks!

Wow from zero knowledge I'm getting to be such an expert on this veggie with everybody's inputs. Thanks Lou, good to know you can have alugbati in the US.

i wonder if the word muteg shares the etymology of mucilaginous. lol