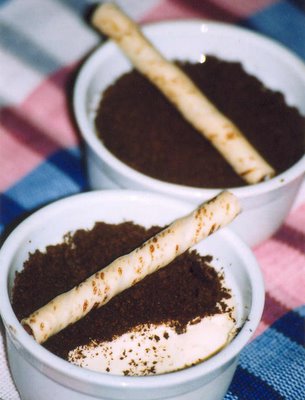 The last blog party theme for the year is indulgence, Las Vegas style, cooked up by charming Stephanie at Dispensing Happiness. Today appropriately calls for a

party in the Philippines, because the nine-day misa de gallo (dawn Catholic masses, literally translated from the Spanish "mass of the roosters") has started, which brings on the official (frantic) countdown to Christmas.

Might I say, thank you, Stephanie, for giving us this once-a-year opportunity to live it up and indulge in our favorite things. Us who are tasked with the unending job of feeding others, of hosting parties and not being able to partake of the fabulous food because of sheer fatigue at preparing and cooking.

Girls, we deserve it. So here's my indulgence.

I am so enamored of creamy desserts, not necessarily sweet, but richly, artery-clogging creamy. For this party I prepared two creamy desserts - refrigerated cakes to ease up on the preparation. First one is my version of the Oreo Cheesecake, made with Cream-Os, the local version of Oreos, which I prefer because they're crispier. So it's apt to call it Cream-O Cheesecake. Oreo cheesecakes cost an arm and a leg in cafes and specialty bakeshops, which makes me glad I can make my own, at less than half the price of a store-bought one. It's easy to make, just requiring a good food processor. In the past I used to buy the sandwich cookies in foils, remove the filling, and crumble the cookies with a spoon. Good thing I discovered that baking stores sell crumbled Cream-Os, so now I just pour them.

For the blog party I made individual, mini Cream-O Cheesecakes in ramekins, adorned with a Stikko. When the mini cheesecakes have been out on the table for a time and have turned soft, the Stikkos can be dipped into the velvety cream cheese filling in lieu of a spoon.

Next I have a mango parfait, or mango float, because it is now mango season in the Philipppines. Mangoes are my all-time favorite Philippine fruit. Although I can be very happy with just their simple yet delectably heavenly selves on the table, I try to incorporate them as much as possible in dessert concoctions, even inventing ones in their honor. 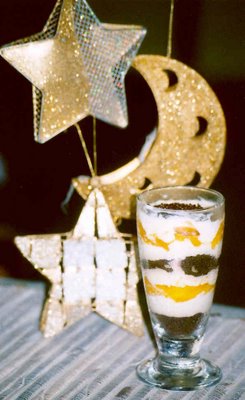 I learned to do this because every mango season (summer and end of year), we are swamped with kaings and kaings of mangoes which ripen all at the same time, filling the entire house with their sweet, heavy scent. And even though we have mango shakes and mango slices with every meal and in-between meals, and we give kilos and kilos to the neighbors, the entire family and extended relatives still cannot keep up with the the ripening mangoes before they rot and blacken. It's not even possible to sell them because by that time mangoes have flooded every nook and cranny of the province, at give-away prices.

This parfait uses the left-over Cream-Os, layered with sweetened cream, scoops of ripe mangoes, more cream and crumbled cookies, and topped with chocolate sprinkles. Chocolates and mangoes is a marriage made in heaven. 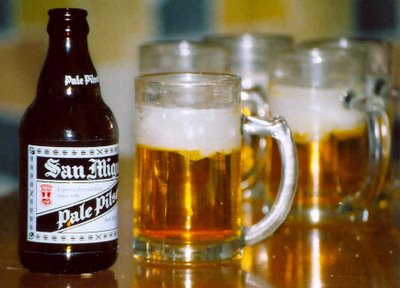 For drinks, I would like to introduce the Philippines' patron saint, St. Michael, a.k.a. San Miguel. San Miguel Corporation is actually a gargantuan food, beverage and packaging company with manufacturing facilities in other South-East Asian countries, China and Australia. But it started as a brewery in the Philippines in 1890, producing a dark, strong pilsen that has survived over a hundred years and is still the beer of choice for most Filipinos, even those who have been abroad for a long time.
This beer bears the company's name, and even though SMC diversified into ice cream, deli meats, canned goods, dairy products - most of which are also market leaders in their own segments of the industry - when you say San Miguel what will come to mind for most Filipinos is San Miguel Pale Pilsen.
For me, no other beer compares to San Miguel. It is full-bodied, the bitterest of all beers I've tasted, yet leaves the sweetest, caramely aftertaste halfway though the bottle that is so much anticipated, yet not wholly acquired. A tease. Because the sweetness - it's just there, at the back of the throat. I can taste it, but cannot bring it forth.
But I have over-indulged myself. I do not drink anymore, that was more of a reminscing of my carefree past. For now I just made faux beer (dyed water or gel candles) with wax candles as beer foam on top, in real beer mugs. They make a great party decor when lighted, and can double as give-aways when the merry-making is over. 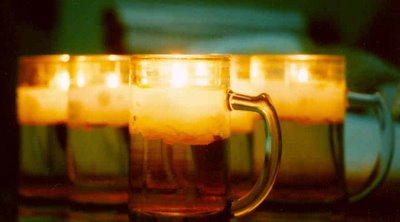 * I actually made these for my significant other's birthday party, the number of beer candles representing his age, lighting them and making him blow all beer candles like a birthday cake.

Kai! How fabulous! Oreo (or your country's version, which sounds quite wonderful, actually) cheesecakes? I hope you made plenty; cheesecake is my order-out dessert, my indulgence! I never make it for myself, never buy it...but if I go out? Bring it on.

They look wonderful, and I'm with you on the mangoes...I wish we had the climate to grow our own. Too bad I couldn't take some off your hands; Alex and I could do serious work on a box of them!

Everything looks great...I love the candles...and I'm so happy you could come to the party again!

Hi Kai,
Thanks for the wonderful cheesecake. I have been craving for cheesecake lately. Also, the mango shake look so pretty and delcious! Love it. Great food!

Nice cheesecake, Kai. And I hope you will remember me if ever I'm there during mango season. ;)