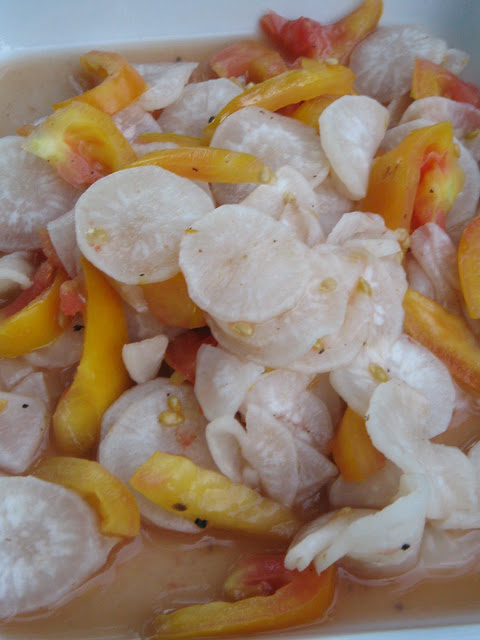 I'm not a fan of radishes. Or rather, I can dismiss it and be indifferent to its existence. It did not figure in my mother's, as well as my grandmother's, cooking, whether prominently or peripherally. I actually came across it only upon coming to Metro Manila to get a college degree, in the form of a vegetable that looked like it was put in a sinigang because there was nothing else to use.

Then I heard it is not really popular because of what it can induce your body to produce. But I ate it, when there are no other vegetable dishes around, since I cannot eat a meal without a vegetable dish. I came across another dish where it was sauteed with some ground pork, and this time around it is the sole vegetable involved, the pork being just a flavoring ingredient.

I have learned from all my eating out that radishes and mustard greens go together inseparably in tamarind-soured sinigang, especially if the broth is flavored by misó. So that's how I cook deep-sea fish sinigang - soured by sampalok, with mustasa leaves and lábanos slices, broth yellowed and thickened by misó. But it is still too bitter for me.

The third dish involving radish I learned from a friend, who served it during one of the many meals I had in her home. She grew up in Palawan, and radish-tomato salad is standard accompaniment to the fresh seafood that is so bountiful in that paradise of a province.

The flavors of grilled, baked or fried fish and seafood is brought out by this salad, which is akin to the more common atsara/achara (pickled unripe papaya) that accompanies meats. This one, though, because of the raw labanos component, has a bitter undertone and salty hints. It is a fresh take from the sweetish atsara, pairing excellently as well with lechon manok, liempo, and any inihaw and pritong karne. Easier to make, too, since it does not require cooking.

To make, slice a medium-sized radish into thin, cross-wise rounds. Mix with salt and set aside for about 20 minutes or so, or until the salt has melted, in the meantime slicing some tomatoes into wedges. Squeeze the radish slices thoroughly, until almost dry, and put on a serving dish, disposing of the squeezed juice. Mix in the tomatoes, and splash on some local vinegar. Serve immediately for maximum crunch. Leftovers can be refrigerated, which would turn the salad a bit watery, but if you don't mind the radish being a little droopy it would still taste terrific.

Great, and quite handy, for bringing to a picnic or a beach trip, assembling it while the fresh seafood catch, and maybe some eggplants, sizzle on live coals. But I've had it at home as well, and it is just grand.

yum. this is one of my ol' time faves. usually with sinugbang baboy.

Oh-ho, how come I rarely come across ensaladang labanos? From your comments it looks like it is actually a popular side dish. My great thanks to Charm who introduced me to this. Thanks, Yo, for the tip, will do that when it's suha season.

Kai, its not really that popular. ur recipe is! i learned to prepare it (labanos with suha) when i was taking care of my mom at the Institute of Natural Healing in Subic. she was advised to eat raw vegetables and fruits to aid her in her battle against cancer. raw food is rich in antioxidants and phyto-chemicals.

i favor the small red raddish and davao pomelo. they look and taste good together. forgot to tell you to add ground black pepper to taste.