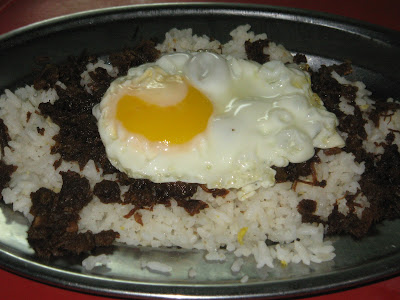 
This kind of tapsilog can only be found at Rodic's, where you eat your best, at the Shopping Center inside the Diliman campus of the University of the Philippines in Quezon City. Its uniqueness lies in the tapa being macerated to almost a floss, which otherwise would be thin slices of marinated beef in other tapsilog. It is also made from carabao beef (what? you didn't know that? neither did I!), commonly termed carabeef.

Most dormers from Kalayaan, Yakal, Sanggumay, Molave, Ipil and Ilang-Ilang, and of course the residents near Shopping Center (SC), would be familiar with the SC foodscape, and so would most students residing outside the campus who did not restrict themselves to CASAA, the Beachhouse or Katipunan. But I had a lot of classmates, both during my undergrad and graduate years, who didn't eat at SC, and I always took it as my responsibility to introduce them to Rodic's tapsilog.

Their reactions were invariably the same - staring blankly at the dish served them, saying, "aahhh....." and mustering enough courage to ask "this is tapsilog?" But after a few spoonfuls all reacted invariably the same. Satisfyingly and fillingly delicious. Additional rice, please.

The members of the org (short for university organization) I stuck to frequented Rodic's, so much so that even after we had graduated and left the campus, when we felt like going senti and wanting to reminisce we would round everybody up and troop to SC.

When a former member took his vows to be part of the order of the Society of Jesus in the United States, he chose to say his first mass at the Chapel of the Holy Sacrifice inside the UP Campus. We all met to practice in accompanying the mass, and afterwards we proceeded to, where else?, Rodic's. 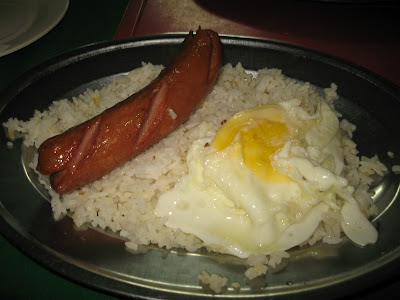 We were all laughing and marvelling at how we had all grown but still stayed essentially the same. How we retained our distinct gestures, mannerisms. And we still had our appetites, the hunkering cultivated by years of absence, for tapsilog, and other good things at Rodic's - spamsilog, jumbosilog, bopis, kaldereta, saba con yelo, etc.

A month ago today, on June 18, 2007, a celebration was held to kick-off the year-long centennial festivities that would culminate on the 100th foundation anniversary of the University of the Philippines on June 18, 2008. During the program there was a lot of reminiscing, and one common thread was the sense of constancy in the system. In everything, from the suspension of classes so we could join rallies, to the way your survival is determined by your memorization of your student number, to the dreaded process of registration. It seemed all underwent, and would undergo, the same harrowing and enlightening, exuberant experiences. 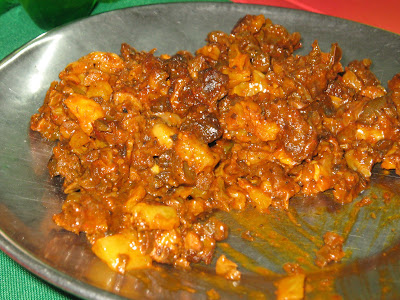 Which brings me back to Rodic's. Why do we return? I guess it's also about constancy. We go back for the same dishes, and we get the same. Year after year. The same Ilongga cooks and servers, the same red-checked tablecloths, the same tin plates, the same vinegar bottles. The same tapsilog. The same greasy smell on your hair and clothes after you've eaten your fill.

Rodic's is not celebrating its centennial yet, having been established only in 1949, but it has been around long enough to generate the same experience in generations upon generations of iskos and iskas.

Of course all this is not to say that UP, and Rodic's, and we, have not changed. There have been astounding changes, in fact. Like there's water now in the comfort rooms, there are garbage bins around the oval. There are a lot of new buildings, there are TOKI jeeps (reverse of IKOT), there's a spanking new alumni building.

And among my friends, there are now bulges here and there, a lot are now accomplished in their chosen fields of profession, we are now "moneyed" - to the point that, as someone noted, even though Rodic's tapsilog had doubled in price from when we were still in school, we can now afford to "eat all you can."

At Rodic's there are noticeable changes, too, like the upstairs space is now air-conditioned, and it has expanded with a branch in Makati City, serving mostly homesick alumni.

But in all things I guess what's essential remains and will stay the same. The same aims for academic excellence, leadership and service. The same bonds of friendship that attach people far away from one another. The same anise-flavored, vinegar-spiked, flossy tapsilog.

The Cakes at The Chocolate Kiss
Dayap Chiffon Cake
Quezo Chiffon
Posted by Kai at 2:33 PM

hi kai! what a fitting tribute to the place wkere kuya e- eats his best! the other day, i saw my batch mate in polsci, now a full-fledged lawyer, he said that his office is in binondo but he still comes back to rodic's, once in a while, for tapsilog. shucks, i can even remember some of the conversations i had with friends over tapsilog and bopis...they have become part of rodic's "charm", i guess - the stories that came along with the meals...

Nice one. Did you get anything from Rodic's for your recent blog? Kahit man lang free tapsi for one year...mmmm. Keep on bleeding that pen (er, or pushing that key?!?).Ed.

Edwin, of course not! I dine incognito. It has become too far for me to take advantage of any freebies, anyway!

Yes, Karen, a UP alumnus couldn't help but feel nostalgic about Rodic's, especially those fortunate enough to have been residents of the campus. Personally, I preferred Jumbosilog over Tapsilog because of Tapsi's peculiar after-taste, and I wouldn't have known that's the taste of CARABEEF if you haven't been kind enough to inform your readers. Jumbo was my favorite on Sundays, the only day Molave gave us respite from their food. On weekdays even, I'd spend the extra peso for Jumbo when Molave's dish didn't suit me well.

Speaking of carabeef, Karen, let me digress for a while. My hog raising business has brought me to Bacolod's slaughter houses and you should see how cows and carabaos lose their lives, almost heroically, to feed mankind. I'll spare you from all the gory details, but the experience will leave you wanting to take all the beef every time it's on your plate, and the bones even, so that these noble animals will not have been slaughtered in vain. Never waste the smallest flake of carabeef the next time you have Tapsilog, Karen.

I'm struck how true it was back then that out survival hinged on our student numbers, and failing to disclose them as easily as we could our names was almost sacrilege for us. To this day I still recall that I, XXXXXXXXXXXXXXXXXXX, of the College of Arts and Letters, was tagged 90-30531, and you my dear friend, XXXXXXXXXXXXXXXXXXXXXX of the same college, for all intents and purposes of the University, went by 90-08016!

We should probably have Tapsilog together again some day.

Seriously, a Rodic's here in Bacolod would certainly be a haven to all UP grads who have chosen to stay, a place to enjoy good food while reminiscing all things past.

Keep on writing for our delectation and delight, Kai! God bless you!

wow this took me back in the day! i studied briefly at up on a study abroad program. we lived in balay kalinaw next to ylang ylang. my roommates used to love the skinless longsilog they served there. ahhh the memories! my fave place on campus used to the chocolate kiss!

No problem there, Eugene, you can supply the spam and longganisa and tocino, plus the dinuguan and bopis and binagoongang baboy!

Hi Joaanb, good reminiscing, huh? We love Chocolate Kiss, too, and it's still operational, thank goodness there's a nice place inside the campus for once.;-)

I stayed in Kalayaan and Molave during my years in Diliman. I ate at Rodics Sundays (lunchtime). Wish I could have the good old Tapsilog again.

I am not from UP but I attended review classes there so I spent quite sometime inside the campus. And yes, when Im there, the first eating place I will visit (esp when I still have lots of money) is Rodics and savor thier tapsilog.

Its uniquely delicious and I hope they go into franchising so that we living here far south could taste that tapsilog again.

hello!
i introduced my daughter to rodic's and beach haus and mang larry's isawan.

now everytime i fetched her from school, we always dropped by at the shopping center for rodic's and fruit in ice cream at the internet cafe across rodic's, very cheap at 23pesos per scoop (used to be 20pesos). we are also addicted to the fruit shakes(available at the fruit stall in the dulo along side of rodic's).

my wish is for my daughter to pass UPCAT so she can wear my sablay. =)

Hi Anna, wow, talk about mother-daughter bonding! Hope I could do the same with my kids in the future. Hope your daughter did well in the UPCAT so you could be there with her more often. I'd love to live in-campus again myself!

P.S. There's fruit in ice cream across Rodic's? That would be nice for dessert after tapsi! In my time the only place we could get ice cream was at the coop grocery hahaha!