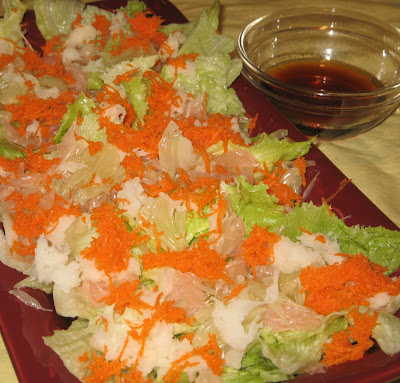 The cooking and eating frenzy is far from over for me at this time, with the foundation anniversary of the agency I work for, the impending arrival of a balikbayan relative who will be staying here until Valentine's week (meaning five weeks of touring Manila's restaurants), and an ongoing despedida for my Flynn, who will be out of town for about a month on a maiden voyage of sorts.

I'm about fed up with eating, excuse the pun, particularly since the debauchery started upon the entry of December, what with many different groups of friends holding parties and binge-out events spread out over the month, and in all of these, the main course always, as in always, centered around meat.

The scene did not change in Pangasinan, where we spent Christmas. The traffic along the road to the daungan in Dagupan City, where I was planning to scout for Lingayen Gulf's bounty like fat-laden crabs, prawns, lapu-lapu, malaga, was so horrendous that we bypassed it and ended up in the grocery. And a grocery is only good for meat, canned goods and processed food, if not much else.

We spent New Year in Cavite, but by the time we arrived it was already too late to buy seafood - there was not much else to buy, actually.

I don't know if the tingling and numbness I'm experiencing in my upper extremities is due to too much meat consumption, but whether or not this is the case, I'm near to sprouting wings and growing a snout and some hooves. 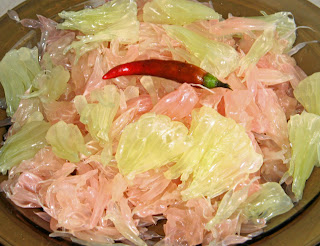 I find that the most refreshing treat for umay is a bowl of maarat, bitter-tart, lukban (suha, pomelo), thankfully still in season, so much so that I sometimes crave for the juice (in pink powder form). The arat and the bitter hints serve well to erase the grease on one's lips, better than the other citrus fruits in season nowadays, like oranges which prove too sweet.

More than that, lukban is a good neutralizing agent for blood sugar, which would serve well with the sugar-laden desserts of the holidays.

Lukban is good to munch on anytime, anyhow. My friends open up a whole globe - good enough for sharing, since the native lukban is so large - then dip the juicy segments in a mix of vinegar, salt and sili. I love best the peeled and segmented lukban vended along the streets of Baguio City towards the last quarter of the year, in a plastic bag seasoned with salt spiked by dried chili flakes, and accompanied by a stick for convenient eating while sauntering along the hilly roads.

The most common lukban is the pink pomelo, in large, 2-kilo globes, the bigger and more bitter-tart version of the Davao suha, but I prefer the white variety whenever I can find it. The small white ones in Pangasinan - smaller than their Davao counterparts - are so, soo sweet, yet still with the characteristic tart-/bitterness.

People say the arat - bitterness - is due to the wounding of the fruit when the pulp is not skillfully peeled. But I have eaten enough bitter pristine-skinned lukban to believe otherwise. 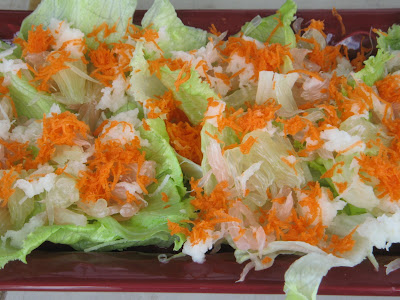 Pomelo salad, yam som-o - pomelo segments with greens, peanuts and sugar, with shrimps or chicken - is common in Thai cuisine. This pomelo salad is the concoction of a friend, and consists of pomelo segments, julienned carrots and lakamas (jicamas) on a bed of lettuce and drizzled with a honey-patis mixture. It may be a deconstruction of the Thai salad.

This salad is heftier with the maximum crunch due to the carrots and the jicamas (the salad in the photo contains grated carrots and jicamas for the kids, which was fine, but it made the salad a little too watery), but without meat. It is what I like eating these days with my meat fatigue, but it is also an excellent side dish to any meat, or seafood dish, especially if grilled.

The patis dressing is perfect for the sweetness of the carrots and the jicamas and the tartness of the pomelo, with the honey (just a little bit) tempering the saltiness. Nice blending of flavors, and so refreshing. Great colors, too - it livens up any table.
Posted by Kai at 4:51 PM

wow!! such a healthy and yet delicious salad!! do you serve it with a grilled meat or fish??

Dhanggit, it is good either with gilled meat/fish or anything fried!