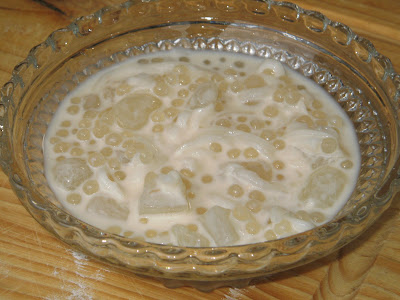 I first made this buko salad many years ago, I've already forgotten where I got the inspiration for it. I'm sure it wasn't something I ate somewhere, whether at a party or at a restaurant - I've never encountered something like it before, and until now I've never seen it anywhere.

I think I made it with the idea of creating something purely white, for the holidays in this tropical country. The ingredients assembled themselves before my eyes, since they are all readily available and used in any occasion. Fast forward to about a decade later, and I'm hearing strains of the ad jingle "Mayo (sic) have a white Christmas" over and over on TV.

My daddy's ideal buko salad is an assembly of fruit cocktail, buko, whole sweet corn kernels, kaong, nata de coco and fried peanuts, caressed by cream and sweetened even more by condensed milk, served almost frozen. It has become, and still is, my standard buko salad.

My white tropical salad is a simplification of that buko salad, and, needless to say, tropicalisation. So I did away with the fruit cocktail, and the corn and peanuts were also removed for their color. What's left is an absolute buko salad - coconut in all its forms and variations - fresh buko strips, kaong, nata de coco, swimming in evaporated and condensed milk, which are also forms of coconut cream/milk.

The evaporated milk component here is more suited to buko, and because I like this salad almost soupy - it should be served with small individual bowls and a serving ladle. Less fat, too.

I also like to add lots of small sago because I love the mouth feel, plus it adds to the presentation effect, and diffuses the over-all sweetness, too. Sometimes I add almond jelly, too - still white - to add to the textural contrasts, but in keeping with the coconut "theme" it is more appropriate to use coconut-flavored jelly, or use coconut cream (gata) in flavoring clear gelatin. 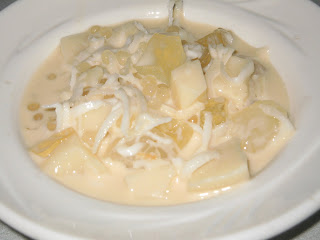 Besides serving this at Christmas (good for fiestas and birthdays, and almost any other big occasion - very economical), it is great for New Year feast, too. It is a good (or better) alternative to the omnipresent buko-pandan salad, and for me it symbolizes purity - approaching the new year with a clean slate and pureness of heart. The sago, being round, and the almond jelly, are believed to be harbingers of good luck, although of course I don't practice such things. It is just nice to play along. 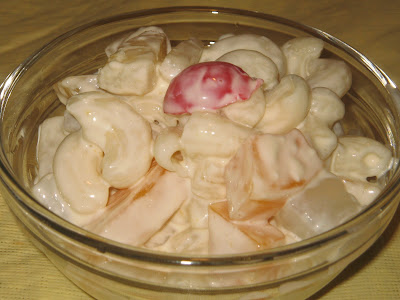 Still on the subject of salads, I used to find it weird that in some areas in my province, particularly in my husband's barrio and in other rural areas, fruit salad - which I am used to eating just with frozen cream, and perhaps a hint of condensed milk - is spiked with mayonnaise. I couldn't understand the logic behind it (to foil the cloying sweetness?), and I didn't like the taste.

But what was more weird is the fact that boiled elbow macaroni is added to fruit cocktail in making fruit salad. I had only been exposed to macaroni in savory dishes, so if it were a salad it was chicken-macaroni salad, in its many variations, with mayonnaise.

Perhaps because we are so enamored with the taste of mayonanise (where else can you find somebody enjoying a sandwich with just mayonnaise as palaman?), so we like it in our fruit salad. And yes, to add a different dimension to the sweetness, although I might say it is also adding to the fat content. I think the pasta addition to fruit salad is our own way of economizing - as a form of extender to the very costly fruit cocktail, which contains fruits not found in the country. This practice, after all, goes way back before our canned fruit cocktails were tropicalised into almost nothing but papayas, pineapples and nata.

Anyway, I have found that it grows on you, and I have become addicted to pasta-fruit salad. I have discovered that angel hair pasta broken into short stumps is better than elbow macaroni in a fruit salad, although of course it is much more expensive. Gives quite a nice touch in terms of presentation, though. Almost surprising. Even magical.
Happy New Year and wishing you all what I would like the new year to bring - more food adventures the whole year round!
Posted by Kai at 11:07 PM

I also find that ad jingle catchy. Nice recipe. We cook the condensed milk for a while for that caramel taste.

In the can? I have heard about toffee/caramel from condensed milk boiled for hours in the can. I accidentally made caramel from turning the heat a bit too high and using a thin pan because I was such in a hurry.

You can boil the condensed milk inside the can or cook it inside the pressure cooker. You can then dilute the cooked condensed milk with cream. . . but then again I was thinking that it might brown a little and ruin the theme of your salad.