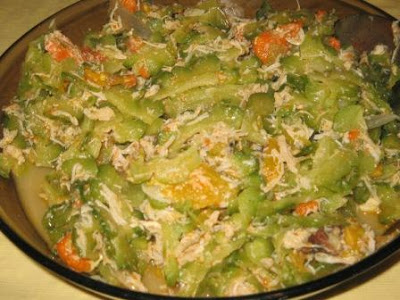 [Sauteed bitter melon with crab meat]
One day, when we had excess crab meat languishing in the freezer, and all the vegetable drawer contained was ampalaya, I discovered that ampalaya and crab meat can be a great pair to make ampalaya con kani (an intended pun on the common Pinoy dish ampalaya con karne). It is actually a better altrernative for me, who generally avoids meat.

Eating sauteed ampalaya can be considered in line with the sacrificial spirit of Lent at our house, because the househelp don't like it and will just have instant noodles when it is the dish I ask them to cook.

We eat it regularly - maybe once a week - and maybe I should have bought tons of ampalaya for this Holy Week, but it is hardly sacrifice for me and the hubby because we like eating it, not only for the taste but for its health benefits, as well. It would be bitching towards the househelp on my part to impose ampalaya on the entire household this week - not a good attitude, now or outside of Lent.

I like ampalaya cooked simply - sliced, salted, and squeezed, then sauteed with garlic, onions and tomatoes. Topped with cubes of fried tokwa (tofu) if I had remembered to buy at the market. And that's it. No eggs or ground meat. Great with fried or grilled fish. 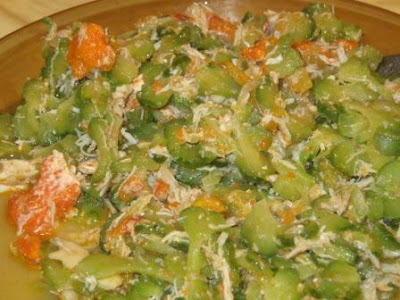 But we have this once in a while, when there is left-over crabs, or alimasag. Or when I chance upon crab meat in the grocery. Rather than cook crab meat in an omelet, upping the cholesterol level, we have them with ampalaya. I would like to believe the health benefits of ampalaya compensates for the richness of the crab, especially when it is female and full of hard, orange fat, as I am wont to buy.

And I think I earn some brownie points when we have ampalaya con kani, because - wonder of wonders - the househelp eat it! And not just token eating it, but really eating it like they like ampalaya. As in, no leftovers. Which is actually good for one of the househelp because she is anemic.

Abstinence from meat during Lent is hardly sacrifice for us in the house because we hardly have meat, anyway. And actually, not eating meat these days is hardly sacrificial at all. We can all avoid eating meat, yet still eat luxuriously, and not with the spirit of sacrifice. Premium seafood is available anytime, in markets and restaurants.

omy kai!
you made me drool over those ampalaya! been a while since i had this and with kani!!! sounds good!
btw, great round-up, too bad i wasn't able to join...but i just might try one of those entries now...thanks!