Crabby at The Red Crab 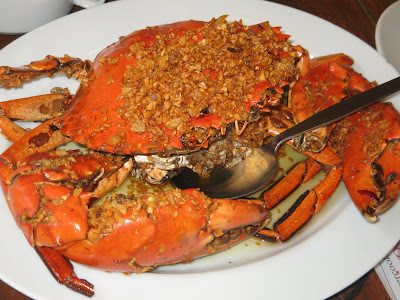 This, was the most expensive crab I've ever eaten, and probably ever will. It was at The Red Crab. It was huge - yes, positively huge, being as large as the platter it was served in, spanning the ladle there. But I felt shortchanged by the amount of crab meat it yielded. And by the way it was cooked. The meat was not freshly succulent. It sorely needed the melted butter and fried garlic that accompanied it, to make it palatable. And it was makunat.

It cost Php2,025. I know crabs in restaurants are priced by the hundred grams, but I think our red crab's price referred mostly to the shell. It didn't even have an inch of the glorious orange, thick fat. 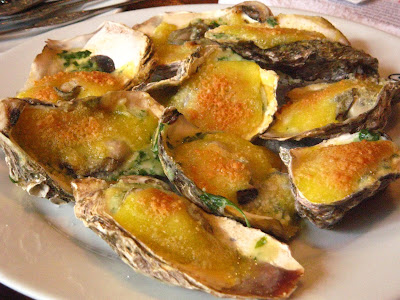 The best-selling oysters were baked smothered in cheese and cream, a la Rockefeller. I would have preferred my seafood cooked with minimum intervention, but this was a bit fine. A bit. 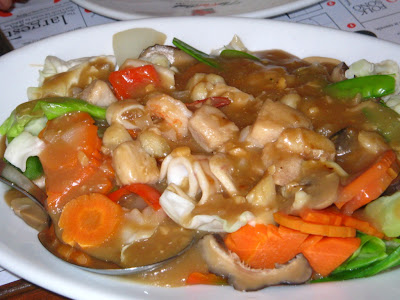 The best one among the three dishes we ordered was this seafood chopsuey. Crunchy Baguio vegetables topped with a great mix of fresh seafood (squid, shrimps, fish) in a thick sauce.

There were four of us dining, three ladies and a male driver who has the appetite of a girl, plus my three-year old daughter who didn't count for much in terms of the amount of food she could eat at this stage in her life. And this was all we ordered, plus rice and individual desserts.

It could have been an okay meal - food was passable, we didn't mind not being full afterwards because we were on our way to Pangasinan and were anticipating the various treats we could buy and eat along the road, service was satisfactory (our waiter was a Pangasinense kabaleyan).

But we couldn't help but raise our standards higher when we saw the bill. It was a few pesos shy of Php5,000. We actually didn't pay for the meal - it was courtesy of an aunt who wanted to treat her cousin (my balikbayan aunt). Nevertheless, we know the value of money.

My balikbayan aunt, who shops at Tiffany's and eats at Taverne on the Green, and at Windows of the World before 9/11, was aghast and was calculating on our way home how many kilos of succulent, fat-laden crabs and sweet, juicy suahe we could have bought and eaten at Seaside (both at Baclaran and Macapagal), where she had enjoyed so many meals.

There was nothing special about the entire dining experience at Red Crab to warrant us to be satisfied in terms of the price of our meal. Service was punctual, and more attentive than in "ordinary" restaurants. We were served a small basket of sliced baguettes while we waited for our orders. And that's about it. Oh well, we each had red aprons, and hot towels. And nothing else.

Even the desserts were not fantastic. 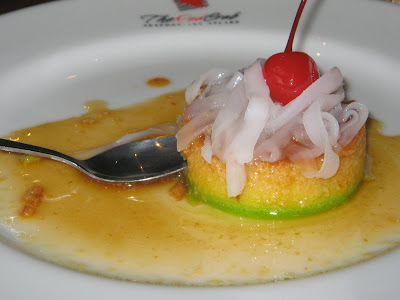 This is buko pandan flan, a take on the popular salad. I like buko pandan salad a whole ton better. This version was too sweet - what with sickeningly sweet syrup, the caramel sweet flan and the sweetened macapuno topping. Thrice - over-the-top - sweet, with no flavor variation. No pandan note was evident. That cherry was out of place, and the flan, to our horror, was like the face of the moon. Full of holes and craters.

As we ate our way through many Metro Manila restaurants and around Pangasinan, we always recalled our Red Crab meal (not in the presence of the sponsor aunt, of course), and always compared. And Red Crab always came short, in terms of the food, the value, the whole experience. The only thing that no restaurant could top was Red Crab's price. The closest it came to was at a restaurant in Dagupan City, but there were eight of us then, including two male drivers.

This was only my second dining experience at a Red Crab restaurant. We once ate at CrustAsia, and vowed never to return. This time was no different.

Red Crab Group of Restaurants
Posted by Kai at 7:28 PM