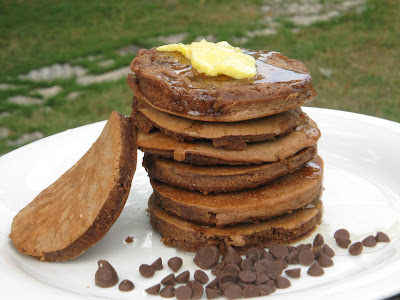 As a rejoinder to the post immediately preceding this one, where I talked about going natural, I'd like to swallow some previous words. Eat pancakes, specifically.

For, more than two years ago, I extolled the consistent, moist and delicious quality of a local pancake brand. Reading the post now makes me cringe - it sounds like a paid write-up, though of course I've never done such a thing in my entire life. It was much of a sentimental post as anything, but still....

So I'd like to recant, and I now hereby declare that homemade pancakes are the easiest thing to make, and the most gorgeous to serve your loved ones for breakfast in the garden. And I haven't bought a packaged pancake mix for a long time now.

We make pancakes from a mix I make myself -

most of the time tripling it for a batch for a weekend breakfast. The ingredients are all store-bought, of course, but the list is mighty short and familiar compared with what I found on the box label of a pancake mix, which had some unpronounceable and scary-looking words. 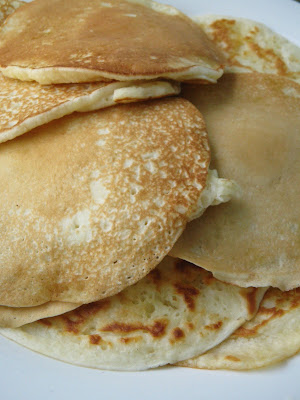 And even though we don't get the same fluffy hotcakes every time, this is a very small sacrifice to pay for a mother's peace of mind. I play around with the amounts, most of the time increasing the flour, and using two eggs when I have some native ones from free-range chickens.

Homemade pancakes is cheaper, because good, fine flour at the public market is just over Php40 a kilo, and a kilo can provide about four batches of pancakes, while a pancake mix box costs about Php50 that is only good for two batches.

This is also the mix I use for waffles, which come out crispy-chewy. I use organic, vanilla-flavored milk from Hacienda Macalauan (that vanilla flavoring is another thing, but the outfit also sells pure, fresh organic milk).

What induced me to forgo the packaged mix was an episode of Nigella Lawson making blueberry pancakes for brunch after a sleep-over of a group of her daughter's friends. She made it sound so easy, and now I don't know what made me think I couldn't make homemade pancakes.

For chocolate pancakes, I add a tablespoon of cocoa powder (or more), and use chocolate milk. I haven't ventured into other flavors, but there's pure peanut butter at home (Ehje's brand) and I've tried making some using toasted peanuts ground at the market, which turned out awesome. Maybe even ube? There's the myriad of toppings, too.

These pancakes keep well, too, not going dry and flaky after an overnight stint in the refrigerator like the packaged ones, or even those from a restaurant. This is not to say that they don't sell, it's just that we usually make more than the family could consume in one sitting, and the kids are more than happy having them again in the afternoon, and with chicken-macaroni soup the next day.

I'll be so bold as to say Pancake House's pancakes are moister and fluffier than my homemade pancakes, but only by a tad. And the kids aren't the wiser.

Hi, I tried your pancake recipe this morning and it turned out perfect. Thanks for sharing. May I have your permission to republish your recipe in my blog. I'm jus starting a new blog. It's a sort of compilation of the things I've tried to make....or recipes that I don't want to lose. Thanks in advance and have a good day!
Leila