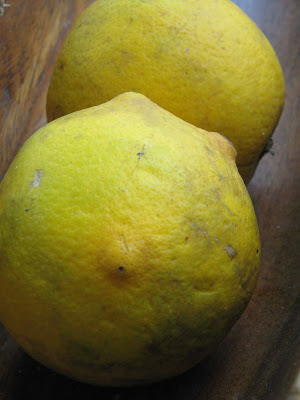 I was given these two samples of a citrus fruit picked from a tree at the backyard of a family friend in Muntinlupa City. I thought they were dayap, but the househelp quickly pointed out that dayap are smaller, remain green, and that these are actually cabelew, the local term in the Pangasinan language.

Cabelew echoes in my childhood memory banks, and is indelibly associated with unripeness, of eye-squinting astringent tartness. Perhaps I mistook the term for another fruit, for even though these did not exude any aroma, halving them yielded a sweet, though restrained, orange-lemony fragrance. 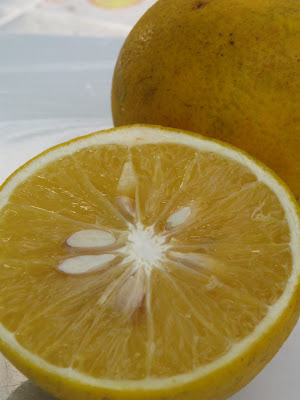 Cabelew is a perfectly round lemon variety with a very thin rind, the pulp only slightly thicker than a dalandan's. It is big, as big as a navel orange. One specimen sported three nipple-like protrusions, which proved to have originated from the pulp when the fruit was sliced.

I get the impression that, based on further discussion with the househelp, this fruit has no commercial value. She said the acidity isn't forceful enough to be made into juice, and it is made into a dip instead.

By which she meant it is used as a substitute for calamonding, in that quintessential dip among Pangasinenses of a saucer of inasin (bagoong isda) squeezed with halves of kalamansi that perenially accompanies inkalot a bangos, and of course any grilled marine fish.

That, and as a rub, for coughs. 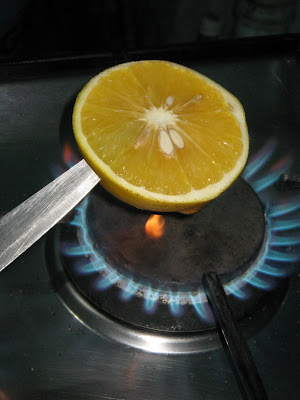 I have long believed that lemon juice, particularly if drunk hot (juice squeezed into hot water mixed with honey), is a potent tonic for immunity-compromised physiologies. It does not just suppress cough and colds, it utterly compels them to dissipate. This belief has been cemented rock solid by countless bouts with barking colds that melted to nothing.

It just so happened that in the week I received the cabelew, my son contracted hacking coughs so terrible every fit hurt his chest. But cabelew aren't true lemons, so I turned to the other tested cough remedy for kids - oregano, blanched and pounded to extract the dark, bitter essence. I didn't have oregano as a kid (maybe I couldn't have been made to drink it, if it were), but many elders swear by it.

So the kid had oregano in the morning, and the heated juice of cabelew rubbed on his back, chest and neck at night before sleeping time. The cabelew was sliced, one half impaled on a knife and put over fire until the rind was scorched. The juice squeezed into a palm, the palms rubbed together, and then massaged onto the body areas. The reheated pith can also be applied onto the back and chest, stroking gently.

The heated cabelew tempted greatly. It smelled like lemon pie. And lemon cake. Two pastries I have an enormous weakness for. But with only two fruits and a cough, I couldn't dare use up even a single teaspoonful of juice.

Which was for the best. Because in three days the cavernous barking was gone. Absolutely no help from any drug, relying only on folk-based natural home remedies. I actually have two thick books on that topic, but this one is totally oral. One adhered to by old wives for generations. One I expect to endure at least in mine, and hopefully last beyond my children's.

Rubbing the heated citrus juice on the back and chest is new to me. So is the cabelew. But I grew up in Manila. I think it is noteworthy of you to record these disappearing practices and little known produce from our province. Thank you.

Hello Kai,
Is this cabelew similar to the Pangasinan Purres, the gnarly green citrus?

louinsanfran, that is the aim of this blog, though I think I'm only scratching the surface.

flipster, I only have a very vague memory of a gnarly green citrus. This cabelew is like an orange, with rind the color of a lemon, and if not for those protrusions, very smooth. Now you've got me on the hunt for that Purres.