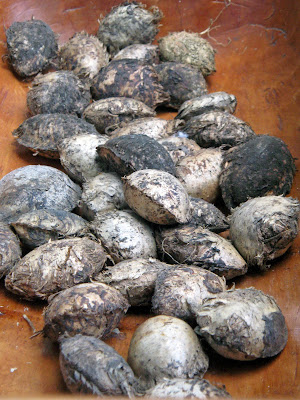 Most of us have forsaken, during the last ten thousand years, the nomadic chapter of our history as modern humans. But we had hunted and gathered for roughly 5 million years, that doing so had been implanted as a basic instinct that is passed down in our inherited collective memories.

First it was aratiles. And now this buto (seed).

For the past month or so my two older kids have been all abuzz with this buto they have been scavenging around the neighborhood with the other kids. 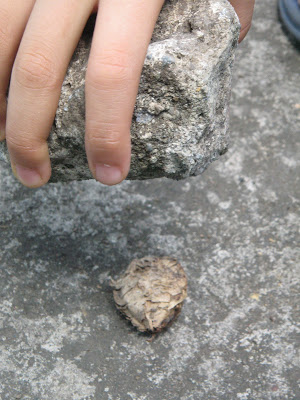 They have pinpointed places that likely harbors a stash of these buto, and have come to know what a seed that has an edible core looks like.

What's more incredible is that they have discovered the most crude way of getting to that edible, nutty core. 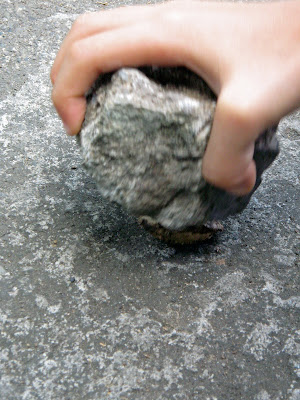 What can be more paleolithic than employing a large rock to repeatedly pound the hard shell encasing the seed until you get to the part that can be eaten? 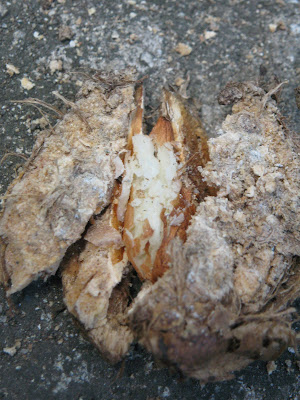 Of course as any normal mother I shook with fright the first time I heard this hunt for and gathering of seeds. But I kept my composure so my kids didn't form an early opinion of their mother as unsteadily fastidious.

I went with them to their sojourns, keeping my mouth shut when they turned over patches of soil looking for buried seeds (silently remembering to remind them to wash their hands afterwards). I let them educate me on which seeds can be eaten - anything that looks whole, while striated ones or those with lines etched on them are empty and should be discarded. 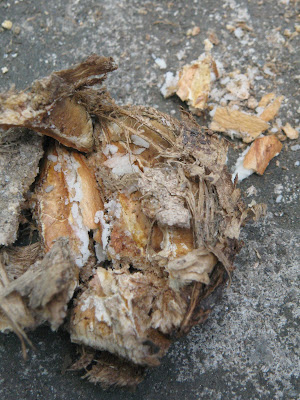 And they taught me how to pick a suitable stone for crushing the seeds, and the pounding itself. They even so generously gave me every other seed they unearthed, to prove to me how delicious they were, and so that I would understand why they like hunting for them. 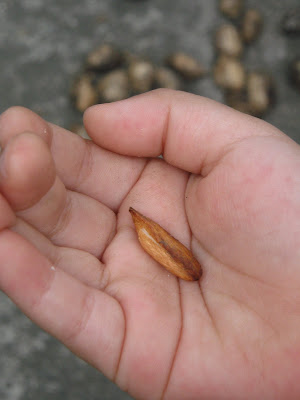 The nut was very miniscule, and I thought the effort involved hunting for them and the exercise you got in opening the case wasn't commensurate to the size of the reward.

Of course I understand that it's not hunger that is the motivation of it all. My kids, and their friends, are more than well-provided for. But after meals my kids would be ready to jump and embark on a search party for these seeds. It's the excitement, the challenge, and the ability to find something on their own, that propels them. 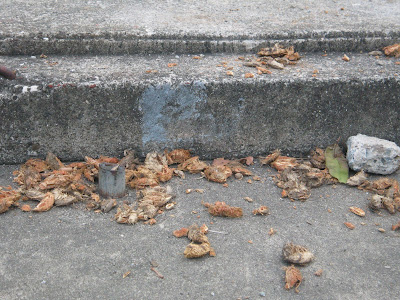 the aftermath
The nut tasted like almonds. It was somewhat a bit acidulated, but the almond likeness was unmistakable. The nut was elongated and somewhat flat, too.

The whole time I was curiously intrigued, naturally. The first question was, which tree did these seeds come from? For they couldn't have fallen from the trees underneath which they are found (around the base of ipil, or palms). I deduced the seeds must have been washed around by floods, or swept and collected and left to rot.

Did we have a local version of almonds? 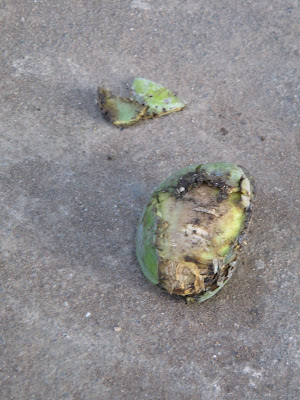 And then we found fresh seeds, with their thick green skins still intact. These confirmed what I suspected - that they are umbrella tree seeds - but couldn't accept because I never knew seeds from a species largely considered ornamental was edible. 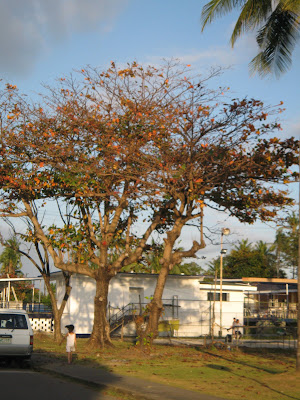 I grew up with an umbrella tree in our front yard growing alongside, towering above other street-side trees in our area, just as I towered above my classmates and peers. It provided much-appreciated shade while we lounged in our andamyo - the front lawn equipped with cement benches - talking with friends and watching people pass by.

The tree's branches, laden with thick foliages of big, wide leaves extended outward 360 degrees. While it didn't have a perfectly round crown, it did perform as an umbrella would, even during a light rain.

But nobody in Pangasinan ate its seeds. It wasn't common where I grew up, because my hometown is inland and landlocked. 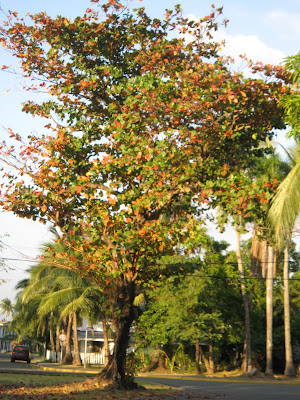 It is only now that I discovered that my childhood umbrella tree is actually the endemic Talisai tree (also talisay), from the family Combretaceae, Terminalia catappa, also known as the Indian Almond or Umbrella tree.

Talisay flourish in coastal areas, so we have an abundance of them now where we live. And the seeds are really edible. Right at this time they are bereft of seeds, the seeds that had fallen months ago having dried up and are just right for eating.

But it must be near fruiting time again. The leaves have turned bright orange that blaze as the sun sets, and are falling one by one.

That's why the hunting and gathering instinct has been awakened. 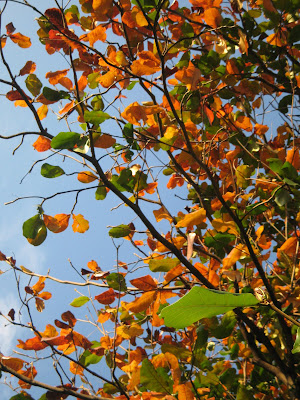 autumn this close to the equator

we had a lot of this in our school yard. sayang. the umbrella tree doesn't look like your typical umbrella tree. the branches are more spread flat from what I remember. nice posts. I hope you write more frequently. thank you

my friends and i used to eat these seeds/nuts when we were kids, there's a big talisay tree just at the back of Rural Bank of Sta.Barbara hehehehe!

Yes, these trees don't look like what we had in Pangasinan, either. Maybe because they are regularly trimmed at the crown, and the fallen leaves (I don't remember them exhibiting fall-like behavior, and from what I've read, they are supposed to be perennial).

Flor, I think I didn't have the right friends when I was growing up, hahahaha!

Hi Kai! The way your kids are breaking those seeds open is the exact primitive method we used waaay back in our younger years! :-) My brothers and friends used to spend our early Saturday mornings scouring for these treasures under and around the many umbrella trees in Capitol Park, Lingayen, near the beach. You're right - it's the Pinoy almond. Yummy!

Hahahaha! Ely, how Cro Magnon we still all are! :-)

my friends/part time yayas were jeepney drivers who used to eat at our little carinderia before hehehehe! i love visiting your blog cause i relate to the posts, missing bulanglang everyday waaaahhh!