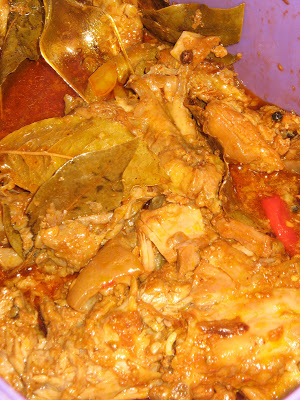 It melts in your mouth, leaving a swath of orange oil coating your lips, which you won't hesitate to wipe away with your tongue.

It's hot with the fire of finger chiles, aromatic from the bay leaves and whole black peppercorns. It's flavorsome, the meats infused with all they've been stewed with.

That's Ilonggo adobo, braised in vinegar and annatto oil until they mellowed and let the flavor of the meats force their way to the front. Not salty, since it's without soy sauce, and with very little hint of salt. Not sour either, the vinegar shying away after hours of cooking.

The first thing I thought of was Portuguese/Spanish-style sardines, the way the pork and chicken were steeped in oil, the obvious long cooking time that rendered the meats falling off the bones. And the foreground taste was the laurel-and-pepper-spiced, achuete-infused oil. 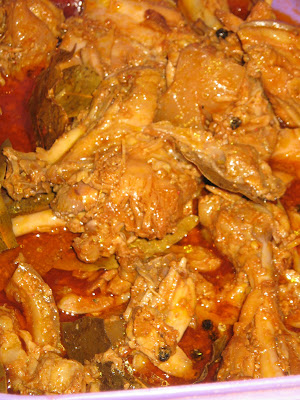 This is adobo as traditional as it could hope to be. Preserved in vinegar, dyed to lure. Taste that forces you to reach out for that bowl of steaming steamed rice. Again and again. and meant to induce beads of sweat.

This was cooked by somebody from the island of Panay, an Ilonggo "na taga-bukid," (from the mountains, since bukid in Hiligaynon is mountains, not farmland). And this is how Bacolodnon friends describe their home-cooked adobo. Spanning the two islands that share the same cultural and linguistic, as well as culinary, traits.

Email ThisBlogThis!Share to TwitterShare to FacebookShare to Pinterest
Labels: food finds, out of town, sira (ulam/viand)

I wonder what makes the meat brown even without the soysauce.

Here in Davao we mix the Adobo with soysauce. In Cebu they call the pork adobo: Humba. The one that they call Adobo is the the porkchop or the lechon kawali. This what makes the Cebu food unique, by their names.

Anyway, this one here is really one of my favorites. I like the adobo to look like this, oily and very tender. This Adobong Illongo, gosh, this is what I really love. I'm hungry.

Nonoy, the achuete dyes the adobo without the soy sauce, that's why it doesn't look pale. Ah yes, humba, but that's sweet, right? Although I know some adobo are actually sweet. Like you could call asado adobo, too, right?

But that's funny, and quite interesting, calling porkchop and lechon kawali adobo. Maybe if you cook the meats in vinegar and soy sauce and then fry it, hehehe.

I go to Cebu frequently. Where I can find porkchop and lechon kawali that are called adobo?